The 800 and the Alto have always been Maruti Suzuki’s bread and butter cars since their relevant launches. The duo have been here for decades and its replacement is due since a long time. 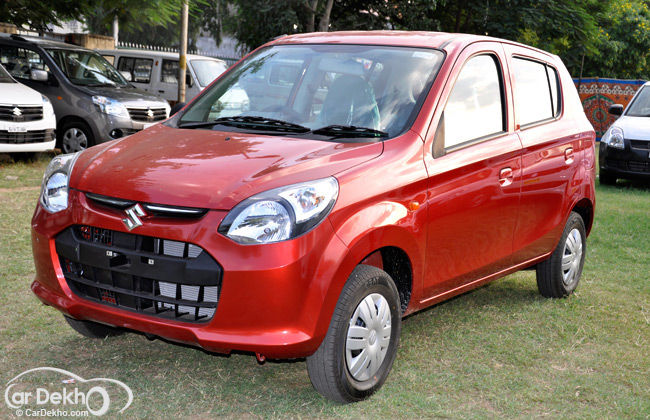 The automaker has introduced the latest-generation Alto under the A-Star, whilst the old Alto continued to sell.

Recently, the company had taken off the Maruti 800 from sale in major cities due to the stringent emission norms.

Despite being dated in design, Maruti Suzuki Alto has been the best selling car in the country. The faith in the Maruti Suzuki brand has made things easy for them. However, as the sales of the Alto saw a dip, Maruti Suzuki did a makeover to the existing Alto chassis and introduced the Alto800. We take a quick spin in this car, to find out how good is the product.

The Alto800 didn’t impress us much in its looks. It does resemble the Ford Figo facelift from the front, with a similar trapezoidal grille and leaf shaped headlamps. Maruti Suzuki seems to have gone the Ford and Hyundai way, and this could be the company’s new design language for its upcoming models.

This is the first Maruti Suzuki to get this new front grille design, and there is a possibility that the company will introduce this design on other models also.

The glass-in area and the DLO are a bit more toned-down when compared to the A-Star, to make it less sporting and more appealing to those who do not wish to make their first car look that funky. They are trying to giving it a neutral look, to appeal the masses. The left hand side mirror goes missing, which again confirms that the company is trying to make a cost-effective product. The side profile of the Alto800 again looks similar to the A-Star. The stance isn’t very aggressive, but the taller design means more headroom on the inside. The rear end carries a hint of A-Star and the old Alto’s rear design.

The interiors are a welcome change over the previous generation Alto. Now the plastic quality and also the fit and finish of the interiors are better than the older car.

The Alto800 gets a new three-spoke steering wheel and also a instrument binnacle as well.  The new instrument panel looks better, but it could have been much better.

The execution of various new elements on the inside is good, but Eon still has better and more comfortable seats. Even the quality of the plastics and the bells and whistles are better on the Hyundai Eon.

The taller design improves the headroom for both the rows, and even the knee room is just fine. There isn’t enough of thigh support on the back seat and boot space is also decent. But the access to the boot is poor.

The engine on the Alto800 is the same three-cylinder 796cc petrol mill that produces 48bhp and 96Nm of torque. The engineers of Maruti Suzuki have worked upon the engine to meet the Bharat Stage IV emission norms.

The NVH levels of the engine are decent, but there is some amount of vibrations at idling speed. There isn’t much grunt in the engine and you will have to work your work through to extract performance out of it. On redlining, the engine does sound coarse. One can easily coast on the highway at a speed of 80-90km/hr in the top cog.

The five-speed manual transmission on the Alto800 is decent and the shifts are less rubbery than the previous Alto. However, there is still scope for improvement.

The engineers at Maruti Suzuki have worked on the suspension set-up and improved the ride quality of the Alto800. The improvement is vast, but the difference can be felt. The 12 inch tyres and the 80 profile rubber is very less and doesn’t aid the suspension to iron out most of the bumps and one needs to avoid these bumps.

Being a tall boy and not so powerful engine, this hatchback isn’t built to drive around a track. Hence, one cannot expect great handling. But the characteristics and adaptive nature of the suspension makes it a decent handler. The Alto800 isn’t bad for the sort of ride it offers. The brakes are also decent and they bite progressively.

The Alto has been India’s bestseller despite being out-dated. The Alto800 is definitely a better-refreshed car over the Alto800, and even the quality is better. So, the Alto800 is great refreshment over the old Alto. However, there are better looking and come loaded with more brownies in the market. So, we will recommend you to even consider these options if you want something more stylish.