Published On Sep 29, 2012 By CarDekho for Mahindra Quanto

Going with the current trend of Mini-SUV and many manufacturers are running pillar to post to get their car models in the firing range, the latest entrant being the Mahindra Quanto.  The biggest reason for manufacturers aiming for such vehicles is the tax exemption of around 12% on Excise duty on a sub 4 meter vehicle. Mahindra took nearly two years in developing the Xylo based Mini Xylo or baby Xylo that it finally christened as the Quanto. We get behind steering wheel of the Mahindra Quanto to find out the facts of this latest entrant in the hot Mini SUV segment. 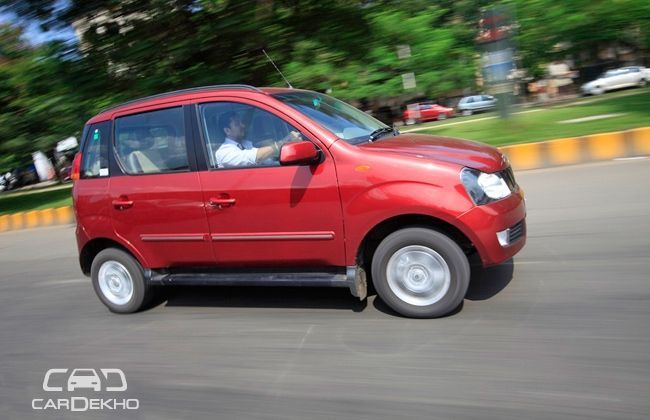 The side profile of the Mahindra Quanto too resembles the Mahindra Xylo but in a shortened form. The fenders are cut short to house the 15inch tyres. The doors are smaller than the Mahindra Xylo’s but large enough for passenger’s to hop in easily.

On the top end C8 variant of the Mahindra Quanto you also get a body colored door protector which flaunts chrome in the middle making it look as if the chrome strip has a body colored outline. The glass area on the side windows is large and the door pillars have the blacked out effect on them. Wing mirrors are in body coloured housing and are pretty large in size. The third glass or the quarter glass is the smallest in size and can be opened with the butterfly style for ventilation when needed.

The C pillar gets a neat glossy black finish along with the 3D styled combination tail lamps that bulge out of the pillar. The door handles are also in body colour. The roof of the Quanto gets black coloured roof rails along with the centrally mounted radio antenna.

The door style tail gate also gets a black metal step-up that makes access and exit easy. The rear bumper gets an angular design on the sides and smooth curves on the lower section. The rear bumper also houses reverse lamps and reverse park sensors on the top end Quanto C8.

The top end Mahindra Quanto C8 also gets a rear defogger along with rear wash-wipe as standard fitment. The short overhangs and the placement of the rear wheel at the extreme end of the Quanto makes the vehicle look very compact when viewed from the sides but this spare wheel mounted on the tail and the roof rails makes it appear longer and taller than actually it is.

The fit and finish on the Mahindra Quanto exteriors is good and so is the paint quality. There is no cost cutting and panel gaps that are evident on the exteriors and over all it looks like a mighty good job done by Mahindra.

As we mentioned, the entry into the Mahindra Quanto is easy thanks to the step board that it comes with. The cabin space is noticeably large. The dash board is in grey plastic material and the quality feels the same as that on the New Mahindra Xylo. You get height adjustable four spoke steering in dual tone finish.

The steering reminds you of the one present in the Mahindra Scorpio. The instrument cluster gets white backlight with red needles that glow when the lights are switched on. The instrument cluster on the Mahindra Quanto is identical to the one on the New Mahindra Xylo with RPM meter on the left, speedometer calibrated to 180kmph in the middle and the temperature and fuel gauge on the right hand side on the cluster.

When you turn on the ignition, all the four needles on the cluster swing to the max calibration and then swing back, sort of a sporty self-check.

You have the electric mirror setting control; fuel lid open button and the headlight beam height adjust setting control on the right side of the instrument cluster. The centre dash houses the Digital Drive Assist System (DDAS) display on the top that shows all the needed information of the vehicle including the outside temperature, Distance to empty, Mileage, Speed etc. This display has a soft orange back light to it. The centre AC vents have an into the face design similar to the one on the Mahindra Xylo.

The Auto Start-Stop feature is also been carried from the New Xylo. This feature cuts off the engine when you come to a standstill and re-starts the engine when you tap the clutch and is genuinely handy for saving precious fuel. The control button to activate and deactivate this feature is placed between the middle AC vents just under the hazard switch. Below the vents is the MP3 Single CD-Radio unit that also has an USB port on it.

This is the same unit that also does duty on the New Mahindra Xylo.  You have a single zone AC unit under the MP3 system. The AC blower has four speed setting and also a Hi or Lo AC control button. The corner AC vents are round in shape with chrome surrounds on them.

The gear stick gets a bit of silver insert on it along with the mock carbon insert that’s seen on the dash, centre dash and door panels. Twin cup holders are neatly placed next to the gear shifter. A fairly large storage compartment with closable lid is just behind the hand brake.

The inside door handles are round in design and get the chrome treatment on them. The glove box opens softly and is internally lit. Manual Day-Night centre rear view mirror is standard on the Mahindra Quanto. The seats get fabric upholstery in grey and zigzag print design.

The seating on the middle row is good, loads of leg room and head room is available and the outside view from the seats is excellent, thanks to the large glass area. The Xylo trademark folding trays are also carried on to the Quanto but in a slightly smaller form.

You also get Jump Seats in the third row which can be folded back when not needed and the space used as boot. Seating on these jump seats is advisable for people not taller than 5’6 in height and for short drives only. You get reading and cabin lights for the front seats and the middle row seats too with charging points in all the three row of seats which is a neat touch.

The build quality on the inside and materials used in the cabin of the Quanto is good, there’s not much cost cutting that’s evident. Fit and finish is fairly good and the comfort level is the best on the first two rows of seats.

The gear ratios are tuned for more in city usage and the shift quality is slick. The clutch is light and that aids in heavy traffic driving conditions. The steering feedback is heavy but with a tight 5.4 meter turn radius the Quanto feels nimble to handle in traffic and congested roads.  The suspension set up on the Quanto is same on the front and rear with a combination of double wishbones and a five link setup doing their duty very well.

The Mahindra Quanto glides over rough roads and bad patches with real ease. The overall weight of the Mahindra Quanto is 1640kgs that is a pro and a con, while it helps in making the mini SUV sturdy and ever planted but at the same time it also makes the pick-up slow. Speed of 100kmph needs more than 17.50 seconds. The body roll is felt most on the third row while the short dimensions of the Quanto does help in its taut handling.

The Mahindra Quanto may look like its elder brother, the Xylo but that could also be turned into its USP. The cabin on the Quanto boasts of acres of space combined with high quality of ride and comforts for a vehicle this size. The jump seats however are a little point of concern with tight space. The package is bettered with the 3 cylinder mCR100 engine that is adequately powered to chug the Quanto around and with great ease.

The fuel efficiency figures of 17.21kmpl (ARAI) on the Mahindra Quanto is also one of the major plus points. The Mahindra Quanto is aggressively priced starting at Rs. 5.82 lakh for the base C2 variant while the top of the line fully loaded Quanto C8 comes in at Rs. 7.36 lakh, ex Thane, making it a very wise choice as compared to some of the entry level sedans that are currently available in the market.