Published On Apr 13, 2016 By Arun for Mahindra NuvoSport

The sub 4-metre rule has been a curveball for most manufacturers. Mahindra was amongst the first to work around it and not crib about the regulations. Now, we'd agree that the initial offerings such as the Verito Vibe and the Quanto were rather forgettable. But that did not stop them from having a go again. 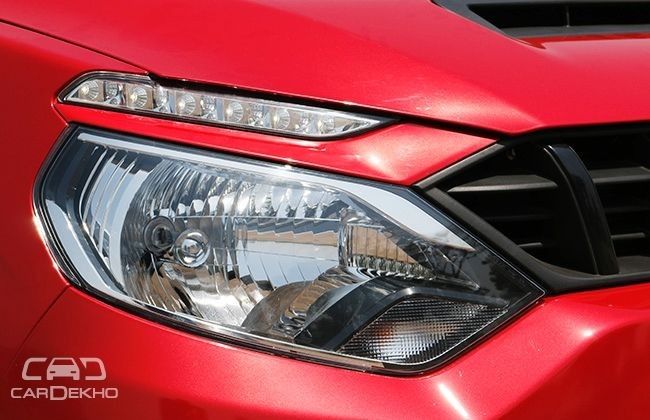 After tasting success with the TUV300, Mahindra has now slid the NuvoSport into the fray. How different is it from its sibling? More importantly, is there more to it than the fancy dress? Let's take a look!

Let's not mince words here. The Quanto was a bit of an oddball, wasn't it? Thankfully, the NuvoSport isn't as outlandish. The tall height and the narrow snout is still quirky. But, on the whole, the design is cohesive and digestible now.

The biggest and most noticeable change is the reworked face. The front profile no longer reminds us of the old Xylo. Our favourite element, have to be the LED daytime running lamps. It forms an eyebrow over the headlamps and does look cool. On a related note, they are bright and grab attention even under the noon sun. The trademark Mahindra 'toothy' grille, air vent on the hood and the large bumper with a faux skidplate lend it some aggression.

The side and the rear remain virtually unchanged. As is the case with most compact-SUVs of today, the Mahindra NuvoSport gets a healthy dose of cladding as well. The dimensions are nearly identical to the outgoing Quanto. There's no running away from the fact that the NuvoSport when viewed side on, still looks like a Xylo with a chopped derriere. The new 16" alloy wheels are a welcome change. The compact-SUV rides on meaty 215 section tyres that give it a butch stance. Subtle updates like the smoked out tail-lamps and the new cover for the spare gel well with the overall theme.

Mahindra might have just made a huge blunder by not updating the design inside. The Quanto's interiors looked outdated even back then, and carrying the same design in 2016 is a bit of a no-no. The other key issue here is quality. While Mahindra did a decent job with the KUV100 and the TUV300, the quality of materials, fit and finish in the NuvoSport can be termed average at best. There are a couple of ergonomic issues as well. Just like the Renault Duster, one cannot buckle up with the driver side armrest in place. The pedals too, are slightly off-set to the right. Also, the accelerator and the brake pedal are closely spaced. If you have Size 11 shoes like I do, prepare to be slightly uncomfortable. The dead pedal too is quite thin and is barely usable if you have large feet.

What the NuvoSport brings in abundance, is space. Of course, it is a 5+2 seater, just like the TUV300. Space in the first two rows is more than adequate, even for someone who isn't in the best of shapes. Seating three in the rear bench is hardly a task too. All three occupants will have sufficient knee-room and shoulder-room. The only complaint here is the backrest angle. It is simply a bit too upright for our liking. You can recline the second row and lounge, but you will need to tuck the third row of seats away to do so. We'd recommend you use the third row only when it is an absolute necessity. The seats themselves aren't all that comfortable and do not hold you in place. Moreover, there aren’t seatbelts or lap belts either. Also, if you are close to six feet tall, you will find you forehead brushing against the C-Pillar. Boot space is fairly generous — rated at 412 litres.

The most noticeable addition is the 6.2-inch touchscreen infotainment system, that is a straight lift from the Ssangyong Rexton. It sits flush with the centre console at an almost upright angle, because of which using the system on the go isn't the easiest thing to do. Thankfully, it now gets a new chunky steering that houses buttons for the audio and the calls. Mahindra has also gone ahead and added leatherette (faux leather) upholstery and an updated instrument cluster to the package as well.

To sum up, the NuvoSport's interior is tad disappointing. Yes, it scores high on practicality and space — but leaves a lot to be desired when it comes to quality and features. Considering it goes up against the likes of the Vitara Brezza and the Ford EcoSport, we wish Mahindra had brought a better package to the table.

Under the aggressively styled bonnet, lies a 1.5-litre, 3-cylinder engine called the 'mHawk100'. It is carried over from its sibling, the TUV300 and runs a different state of tune. With 100 horses and 240Nm of torque at its disposal, the NuvoSport is the most powerful SUV in its segment. The engine comes alive with a characteristic 3-cylinder clatter. As was the case with the Xylo and the old Scorpio, the NuvoSport too does a shimmy on start-up and shut-down. It shivers, and one can feel vibrations on the pedals and the gearstick.

Drive the NuvoSport around and you'd quickly realize that it is at ease pottering around the city calmly. There is absolutely no point trying to extract performance out of it — especially from the AMT variant. Like most automated manuals, the 'autoshift' gearbox on the NuvoSport doesn't do much to suppress shift-shocks. There is an evident lag between shifts and even in manual, the gear changes take a second to reflect. If you are keen on buying the AMT variant over the 5-speed manual, bear in mind that the AMT's job is to relieve your left leg of its clutch duties — nothing more. Drive it with a steady and light right foot and the AMT makes the drive a relatively fuss-free experience.

The 240Nm of torque kicks in at a relatively low 1600rpm, which makes in-city driveability an absolute breeze. It isn't exactly quick off the line. But like we said — that's not the point! We have to say — turbo lag is well under control and power delivery is linear. You do not get that surge of boost like you would, say in the Vitara Brezza. The Mahindra believes in chugging along calmly. On a highway stint, there's enough torque in reserve for it to not feel breathless. However, you will have to plan your overtakes. The AMT is slow to respond with the throttle pinned to the floor. It takes a good second to realize there's an urgent need for power. We're sure the manual will be much better in this regard.

Ride quality is typically Mahindra. The suspension is soft and will iron out bumps and potholes at low speeds — very few filter into the cabin. At highway speeds, the ride is slightly choppy. It rocks from side to side, which might be slightly uncomfortable for the occupants. Do not exceed the legal speed limit and it does just fine. Weaving in and out of traffic isn't its forte thanks to the size, but the steering does take the sting out of it. The power steering is light at city speeds that make parking and maneuvering the NuvoSport an easy task. While we are on the subject, we wish Mahindra had equipped it with a reverse camera. Rearward visibility is an issue due to the tall height and the thick C-Pillar.

The new chassis from the Scorpio has helped contain the body roll a fair bit. It does not roll as much as the Quanto would. That said, corners aren't the NuvoSport's forte at all. Look towards the Vitara Brezza or the Ford EcoSport if you intend on attacking the twisties. Braking power is adequate, but the pedal does leave you guessing at times. We'd have loved some more feedback from the pedal and a little less nose-diving under hard braking.

The NuvoSport is ideal for a broken road infested city like Mumbai. You can glide over the potholes and irregularities without worrying too much. Like we said, maintain a steady right foot, don't force it to pick-up its frock and run — and it does just fine. Treat it like an XL sized commuter, and it won't disappoint.

The NuvoSport is a much better package than the Quanto — that's a given. The newer chassis and the updates make the NuvoSport what the Quanto should have been in the first place. We expected Mahindra to price the NuvoSport aggressively, undercutting the Brezza and the EcoSport substantially. Sadly, that isn't the case. Prices for the NuvoSport start at INR 7.36 lakh (ex-showroom, Thane). This particular top-spec N8 AMT variant doesn't seem to justify the INR 9.76 lakh (ex-showroom, Thane) that one would pay — the TUV300 feels a lot more value for money in comparison. If space, power, and a cushiony ride are your key criterions, the NuvoSport is the one to pick!