Honda had introduced the Brio last year. This was their new entry-level hatchback replacing the Jazz. We have been sharing the images of the Amaze, which is the Brio-based sedan for Honda. 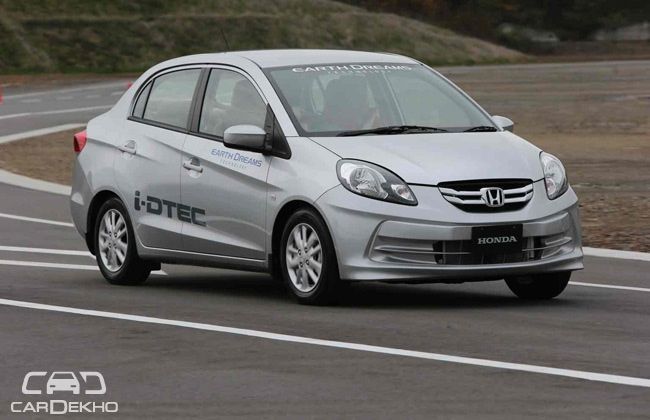 The Amaze will land on the Indian shores by the next financial year, and this will be the first car from Honda that will also be sold with a diesel engine in the Indian market. We get an opportunity to do a short drive in the Honda Amaze to get the initial impressions of the car.

The Amaze will be launched in the next financial year and we got a short drive of the diesel version in Japan. The Amaze gets a 1.5-litre diesel engine, and it will be the first diesel car from Honda Siel for India. Post this, whichever new cars come to India from Honda will have a diesel option. The Honda CR-V, which will be launched in January will not get a diesel option though.

The Honda Amaze is based on the Brio and there is no denying. The front of the Amaze is very similar to that of the Brio. Except for the fact, that the Amaze gets a twin horizontal slat front grille instead of the regular thick chrome one of the Brio. Also, the bumper on the Amaze has undergone some revision to make it look subtle than the Brio.

The silhouette of the Amaze is similar, however the wheelbase of the Amaze has been increased by 50mm than the Brio. This increases the knee room for the second row of passengers. The boot design looks well integrated and well proportioned as well. It doesn’t feel like an afterthought. The total length of the Amaze is 3990mm, which makes it a sub 4-metre car. This helps them to get the excise cut benefit. This makes the Amaze to compete directly with the Maruti Suzuki DZire, as that is the only other car that has a length of less than 4 metres.

The interiors of the Amaze on the prototype are very much like the Brio, however we can expect some changes to make it feel more executive-like. The extended wheelbase has improved the knee room for the second row of passengers.

Even the central tunnel that normally intrudes into the centre seat in the second row is flattened. Even the boot is large and we assume it to be about 350-375-litres and much larger than the DZire. So, in terms of space, the Amaze has more than that on the DZire, be it the cabin and boot. This is Honda's latest philoposhy- man first, machine later.

Honda has plonked a new 1.5-litre oil burner on the Amaze. This engine gets the i-DTEC moniker and it is a derivative of the new 1.6-litre Civic diesel engine that just got launched in Europe recently. This is an all-aluminium engine and Honda also claims it to be the lightest. Honda will also introduce other diesel engines in India, and all these will be based on the same i-DTEC with some changes in the bore and stroke. The i-DTEC has been designed to cater developing markets and also the advanced European and American markets.

The power ratings of this engine aren’t disclosed yet, but the power delivery is linear. There isn’t much of turbo lag and the engine pulls cleanly from about 1200rpm. Even the punch is very much there, but the engine is very much drivable. You can lug it into a higher cog and there will be no struggle from the oil burner. Honda claims it to be one of the best in mileage, so probably ARAI could state a figure of about 24-25kmpl. The engine has a bit of clattering noise, but that’s about it.  The five-speed manual transmission on the Amaze is just like the Brio. The gear knob is small and the throws are short and the shifts are positive. So, there are no complaints about that. Even the clutch is light, thus making driving in city traffic conditions a breeze.

We cannot say in detail, how the overall ride is as we drove on the smooth tarmac of Twin Motegi track. But we did realize that the suspension on the Amaze has been softened when compared to the Brio and there was some amount of body roll on the sedan. The suspension is softened for better ride, as this will be a family sedan. Something like what Maruti Suzuki has also done, softer suspension for the DZire when compared to the Swift.

Even the steering wheel is light and the clutch pedal isn't hard. However, we did feel a bit of vibrations on the clutch pedal. But considering this is just the prototype model, we cannot still judge that. Overall, the driving dynamics are decent and the vehicle is fairly easy to drive and even park.

The driving bit was very little, but was positive. Honda is pitching the Amaze against the Maruti Suzuki DZire, and we think there could be a winner from Honda. The sub 4-metre length will make the pricing aggressive, the Honda badge, quality, design and the space of the Amaze all together; do look great at the moment.

We will have to wait until next year; to see how does the car excel in Indian conditions. The launch is in the next financial year and we shall share a review of the Honda Amaze before its launch.