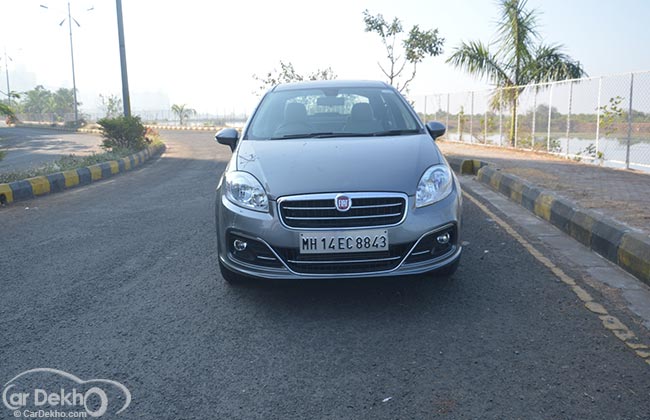 Fiat isn't just building up its dealerships across the country, but also focusing on getting more products. There is already the Fiat Grande Punto, Linea and the Linea Classic. Soon, we see new more products in this line-up. Two more to be precise. One being the Avventura and then it's the Abarth 500.

Since its launch in 2009, Fiat has been upgrading the Linea every year, however this time it gets a major overhaul. The 2014 model year Linea gets a cosmetic upgrade and this is one the major changes implemented in the Linea ever. We get our hands on this new Linea 2014 and tell you if it is worth a buy?

The Linea gets a new snout, as the old front grille is replaced with the one with horizontal chrome slats and the Fiat badging on the top rather than the centre. The headlight design is also sharper to meld with the front grille design. The Linea also gets a newly designed front bumper and redesigned fog lamps.

The side profile of the Linea remains the same, except for new alloy wheels and the ORVMs have side-indicators on them. Other than this, the silhouette remains untouched. The 16-inch alloy wheels come even on the range topping variant of the Linea. The tail lamp design of the Linea remains similar, however the rear gets some chrome treatment as it now has thick chrome salt running across and there is one on the bumper too.

The interiors of the Linea is where the biggest change has taken place. It has a newly designed instrument panel, which is similar to the previous Linea. However, it is the instrument cluster and the centre console that have been revised.  The new instrument binnacle compromises of four-dials and an information reading system for the driver that has two trip readings, their average speed and fuel consumption and instant fuel efficiency.

The centre console now has a newly designed music system and there is an inbuilt light for ambience lighting in the dark. The Blue and Me has been upgraded and now five phones can be paired, though only one can be used at a time. The Linea now even gets cruise control as a new feature along with reverse parking sensor. The Linea comes loaded with ABS, dual airbags, Bluetooth, auxiliary input, automatic headlamps and rain sensing wipers on the Emotion variant.

The space on the Linea remains the same. It has large and comfortable front row seating, however the steering can be adjusted only for tilt and not reach. The centre armrest has been made smaller and there is a slot for a cup holder, before the rear AC vent. The rear seating space is similar and there is sufficient kneeroom, the head room though is a bit tight for tall people. The support of the seats is good for the back and thigh could have been better. The boot too is large enough to gobble luggage of four for the weekend. The volume of the boot if given a number is 500 litres.

The engines on the Linea haven't been changed, hence the power ratings on the two engines offered remains the same. The 1.4-litre SAFIRE has been discontinued on the Linea, and it comes only on the Linea Classic. The T-Jet is the 1.4-litre turbo petrol engine that produces 113bhp of power and 207Nm of torque. The power delivery of this engine is linear and even the NVH levels are fairly low. This was the first vehicle to get a turbo petrol in its segment, but now even the Volkswagen Vento has a turbo petrol. This comes mates to a five-speed manual transmission.

The other engine on offer is the multijet that produces 91bhp of power and 209Nm of peak torque. This is one of the most sold Diesel engines in the country today and also the most popular. The NVH levels are decent, however has a prominent turbo lag in it. Most of the power is available after 2000rpm. This comes with a variable geometric turbo that makes the power delivery linear, however there is still a good amount of turbo lag. The Linea does struggle to pull under 2000rpm, and has to downshift. This engine comes mated to a five-speed manual transmission. In the city, one has to change gears often, while on the highway it drives perfectly. The gearbox is notchy and it takes a while to get used to.

The Linea comes with double-acting dampeners, which soften the ride of the sedan. It glides through potholes rather than crushing through them. This makes the ride suppleness excellent even on bumpy or bad surfaced roads. The suspension does a good job of absorbing the potholes as irons out the ride for the occupants.

The handling of Linea is definitely one of the best in its segment. It has a smooth ride and still amazing handling too. Despite the increased ground clearance, the Linea does handle well. Even the steering wheel of the Linea is just amazing and the body control too. Fiats are loved by car enthusiasts and there is no reason why the Linea won't be.

The Linea is a spacious sedan with several brownies and the pricing is good too. The T-Jet will be our pick of the lot if you need a powerful and fun to drive sedan.