One ‘super’ car to rule them all! 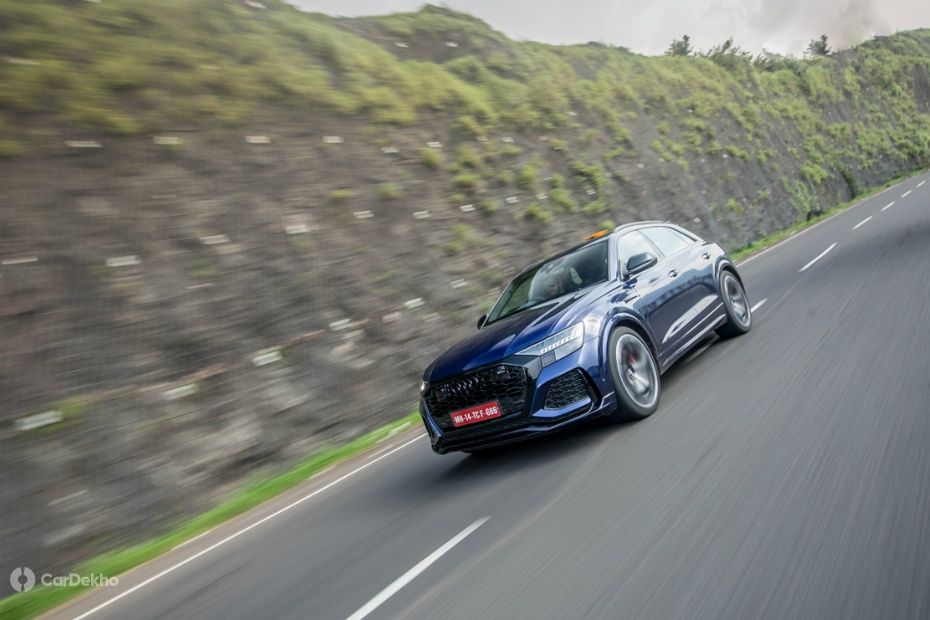 Supercar owners usually have a less ‘exotic’ yet exciting vehicle in the garage for their daily chores. Or for when the family is landing on their private airstrip and the Gucci bags need to be ferried along. But, what if your supercar did all of that and more? One car that could do it all and rule them all.

It's in answering questions like these that we understand why super-SUVs like the Lamborghini Urus exist. But having a Lamborghini-esque alternative to a Lamborghini itself doesn’t make too much sense, both economically and logically. This is especially true when it's time to play it low key in a 5-star lobby or arrive for a business meeting. In times like that, you need your Lamborghini to wear an expensive but tasteful suit. The Audi RS Q8 is that expensive suit.

Scroll down for launch control

It's big! Though based on the Audi Q8, the RS Q8 is larger than its more docile sibling. It does mask its size well in an open environment but the moment it's parked next to a regular car or in a driveway, the size just hits you. The fast and athletic appeal of this massive SUV comes largely from its coupe-like roofline and those sporty bumpers with butter knives for edges. The large air intakes on either side of the grille and the lower lip are large and sharp as well.

Furthermore, Audi has given the RS Q8 the black treatment in places where you would usually find chrome on an everyday SUV. So you have the large all-black grille, blacked-out headlamps as well as black window surrounds and ORVMs. These elements ensure it intimidates others of its kind on the road. Speaking of large, you have massive wheels. Those delicate 23-inch wheels are the largest I have seen on any car till date in person. They grab your attention easier than potholes when you are driving a supercar.

There is drama at the rear end too. The detailed lights with the connected strip over a blackout panel help them pop even in the day and the dual exhaust with those large tips is just what I'd want from my fast and loud, yet cool about it super-SUV.

Sports cars all around the world sport all-black leather upholstery with red contrast stitching, and the RS Q8 is no different. It does just that, no more. But it does that incredibly well. The cabin quality feels Audi flagship right from the touchpoints like the steering and shifter to the areas where you can look like the frameless mirror and the piano-black dashboard. The moment I sat insider the SUV, my entire attention was focused on this one button on the steering wheel which reads ‘RS Mode’.

The rear seats are comfortable and will accommodate your family with love. Seating three at the back is also a possibility but the centre tunnel is a compromise. Plus, the middle passenger has a shorter seat base making it ideal for a child. You can opt for a rear entertainment package, but again, you don't need any more entertainment and drama than what the RS Q8 creates with its ponies.

In terms of features, you again get flagship stuff, but nothing over the moon. For instance, you have a four-zone climate control system, 360-degree cameras, colour heads-up display, a large panoramic sunroof, multicolour premium ambient lighting, soft close for doors and much more. Basically everything you need and expect from an everyday luxury SUV. You also get the multi-screen Audi MMI setup and the fully digital Audi Virtual Cockpit to satisfy the geek in you. However, what it does not have is anything above and over the usual layer in technology to excite the flagship buyer. Because even he wouldn't need it when there is 600 horsepower available on tap with the right foot.

Before I start throwing numbers your way, I want to set the context. Not that it will help defend the numbers, but it would help in blowing your mind as it did mine. The Audi RSQ8 is a 2.4-tonne SUV that gets its power from a 4.0l TFSI twin-turbo V8. Now, the numbers. The engine, though same as the Lamborghini Urus, has a slightly lower output: 600PS, 800Nm. It gets Quattro all-wheel drive to put all that power to the ground and can redirect 84 percent of the power to the rear wheels when needed.

Engaging launch control is simple enough. Press that special RS button on the steering wheel. This makes the car sit down in an attack stance with its air suspension. Foot on the brake. Floor the accelerator. A special yellow font says launch control active on the instrument cluster. And let go of the brake. That's it. That is all it takes to transform this expensive suit into a space shuttle. The acceleration plants you in the back of the seat and until you realise what has hit you, you are way over 100kmph to figure out how many seconds it took to get there. Look down and you are well close to the 200kmph mark and that is when you try hard not to soil the rich leather upholstery on the seats. Luckily, we had a VBox installed in the car so we know it took 3.82 seconds to reach 100kmph. 0-200kmph takes 13.89 seconds! This is in a 2.4-tonne SUV that looks as docile as James Bond having a martini. This makes the RSQ8 the quickest four-wheeler CarDekho has tested! While our SUV was limited to 250kmph, you can ask Audi to unlock the 305kmph top speed. And don't mistake this SUV for a one trick pony. While it can launch all day, every day, the in-gear acceleration is just as brutal with a kickdown (20-80kmph) time of just 3.16s!

I have driven supercars before. The Lamborghini Huracan Evo being the latest. They are quicker than the Audi here (claimed 2.9 seconds to 100kmph as compared to 3.8 of the Audi). But, you'd expect them to be brutal in acceleration. They are much lighter, lower, and pack a heftier punch. What catches you off guard is how this everyday friendly SUV hits you with a punch as hefty as Mike Tyson’s. Furthermore, 100 to 200kmph takes just 10.07s. The Huracan EVO takes 6s! And that Lambo is probably as low as the RS Q8’s ground clearance.

Going fast is easy, but slowing down is often the tricky part. Not with the RS Q8 though. Put your foot down on the brakes and it takes just 34 metres to come to a stop from 100kmph, which is incredible! Usually, a car takes more than 40 metres to do so and did I mention it weighs 2.4 tonnes? The grip from the 295-section tyres and the force from the 420mm brakes give it bonkers stopping power -- and these are not even ceramic discs! In case you skimmed through the 420mm brakes part, let me put this into perspective. They are almost as big as the top-spec 17-inch alloy wheels of the Hyundai Creta.

No matter where you put the floor down, the RS Q8 accelerates with a cause and plants the occupants into the seats. And when you hit the brakes, it just drops an anchor. It does all of this so with so much ease, without any fuss or drama, in the most German fashion possible, that it almost feels... slow. Yes, there is the bassy exhaust note in RS mode and the engine too sounds throaty when gunned, but it's more of a confirmation of driving a fast car rather than the reward. The Audi has also never heard of wheelspins or burnouts. It knows you have a bunch of other cars for that childish nonsense. What it focuses on, and excels at, is clean and unadulterated acceleration!

The RS Q8 knows how to differentiate the Q8 from the RS. It gets a 48V mild-hybrid tech and cylinder deactivation to boost efficiency for when you are feeling humble. Plus, the drive modes make it fit for any occasion. I found the Comfort and Eco modes a little too dull as the wait for the power from a 600 horsepower car feels unrealistic. I prefer the Dynamic mode as the power is available on tap. While we did not try the off-road modes as we had special instructions from Audi to babysit the 23-inch wheels, we did get naughty in a field. The result was improved power delivery in the low traction areas while raising the suspension for higher ground clearance. The 600 horsepower brute touched its belly nowhere and that's some statement!

Speaking of the air suspension, it alters the height of the SUV according to the mode. The adjustment is quick and visually… visible. In the Dynamic and RS modes, the SUV lowers itself to offer better aerodynamics. This also means less travel in the suspension and better control over the weight. In Comfort mode, you have better control over tarmac and the off-road modes lift it further.

Remember I said the RS Q8 is not a one trick pony? That stands true here as well. The ride balance is not going to be as good as the sports cars, but the SUV does good to hold its own line. The setup offers a great balance of when you are going fast through a corner and over a broken surface or speed breakers.

You can feel the weight of the SUV while entering a corner, but it settles in quite nicely and once the computer devices the best ‘power to wheel’ ratio, you have more grip than you’d anticipate. The mass and height of the SUV is especially evident when making quick directional changes, but this is in comparison to a low-stance sedan or a hatchback.

The handling maybe not be as impressive as the acceleration. The rear wheel steering here works to improve stability and even helps you make quicker u-turns in a parking lot. Tech doesn't end there. There are active roll bars that can stiffen up the chassis when cornering and automatically loosen up to give it some flex to remain comfortable while cruising. A testimony to the fact is its record setting lap at the Nurburgring Nordschleife.

Inside city limits, you can drive it as carelessly as any other SUV in terms of its ground clearance. The ride quality too remains quite plush, albeit some initial stiffness. What you will need to be really careful about are those 23-inch wheels. Wrapped in the low profile continental tyres, hit a fast pothole and it's a journey to the boot for the space saver.

The SUV does well on the practical front too and the boot space is no exception. Be it your Gucci bags or a wardrobe full of them, the RS Q8 can accommodate them with ease. The loading lip is a bit high, but that's like saying Bolt doesn't speak English well. It's not what it's meant for, but it’s still really good at it.

Let's be clear, this is no supercar. Yes, the acceleration does give you the thrills, but the way it looks, handles and turns heads is not comparable to a supercar, and that’s not necessarily a bad thing. Priced at Rs 2.07 crore, this RS Q8 is not only the most expensive Audi on sale in the country but also the most expensive Audi RS car ever. While high-priced, it's definitely not supercar money.

What works in its favour is the fact that it comes close to being a supercar, while being ridiculously practical and letting your family join the fun at the same time. It's not loud, be it exhaust or looks, and that's exactly what you’d want from your non-supercar supercar. It is that one perfect fit glove that wonderfully complements your lifestyle, no matter where you take it. If you already have a supercar in your garage, this RS Q8 is exactly what you should have standing next to it.