Published On May 05, 2021 By Dhruv for Mercedes-Benz E-Class

The E-Class offers the same luxurious experience as before, and can be the perfect upgrade for those looking to move up from a C-Class 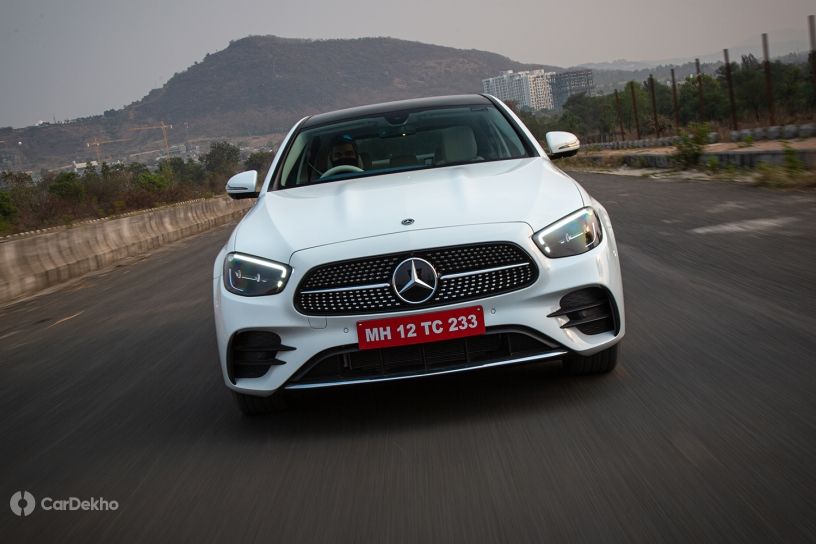 Sedans might be going out of fashion, but apparently nobody told Mercedes-Benz customers. Every third car Merc sells in India is an E-Class! We have a new one now, a facelift to be accurate, but that doesn’t mean Merc has skimped out on the changes. We got our hands on one for the day to see if the German limousine that could be considered one of the bread and butter models of the brand continues to deliver that same luxury experience as before, or not.

The biggest change up front is the grille. Gone is the two-slat design, replaced by an even classier single-slat design. It’s also been given a 3D effect with lots of chrome studded elements in the background that remind one of a night sky filled with stars. The headlamps have also been given an update--the ones on the AMG-Line variant we had with us made use of LED projector headlamps. The 18-inch alloy wheels have a simple yet elegant design that gel well with the design of the E-Class. At the rear Mercedes has given the tail lamps a do over, and they now protrude into the boot lid. Their overall design has also seen a big change, and this is one of the ways you can instantly separate this new E-Class and the pre-facelift model before it. A cool feature about these tail lights is that they can adjust their brightness based on the ambient lighting conditions, just like your smartphone screen.

The interior of the E-Class was class-leading before, and even with only minor changes, it maintains that advantage. The AMG-Line variant we had with us had a deep blue and beige dual-tone interior. There are grey accents all over the place that match well with the other two colours. As far as the changes are concerned, there is a redesigned steering wheel, a wireless charging pad for the front passengers, touch functionality for the touchscreen unit and a fully programmable display for the driver. Both screens, like before, can be operated using the touch buttons on the steering wheel but the learning curve is a little steep at first, and these buttons will take some getting used to. Mercedes has also added some fun bits, like for example if you key in your height, the seats and the ORVMs will automatically adjust to a preset position. Now this is not the most ideal setting but it’s a good starting point. This can be done for both the driver and passenger seats.

There are some misses too, that we felt the E-Class could have done with. Firstly, the augmented reality that overlay navigation prompts over a live video feed from the front camera would have been a cool addition to the E-Class. This is available in the S-Class for now. Another S-Class feature we would have appreciated is “energising comfort.” It basically brings the music, ambient lighting and the seat massager in harmony to deliver a more connected and comfortable experience. For that matter, massage seats or cooled seats would have been much appreciated, seeing as the latter is now available in Rs 15 lakh cars.

As far as the boss seat is concerned, things are the same as before. You get ample amount of space in the rear, the seats can recline--and if you need more space, you can simply push the passenger seat all the way to the front at the touch of a button. You continue to get control of all the sunblinds and the sunroof from the rear, and the tablet in the armrest adds even more functionality. You can access most of the car’s touchscreen controls from it. The seat comfort, noise insulation and ride quality continue to remain the best in class.

The E-Class can be had with three engine options. The first one, employing the E200 moniker, is a 2.0-litre four-cylinder turbo-petrol motor that dishes out 197PS and 320Nm. Next in line is the E220d, which uses the same setup as the former, with the only difference being that it is a diesel. It’s been tuned to make 194PS and 400Nm. However, the AMG-Line variant that we drove had the 3.0-litre six-cylinder diesel engine (straight-six) that can dish out 286PS and 600Nm of torque. It can only be had with a 9-speed automatic transmission.

While the 3.0-litre straight-six might be the most performance-oriented powertrain on offer in India, its power delivery is still quite linear and smooth. After all, it resides under the bonnet of an E-Class. There’s enough power to waft along comfortably, and you never really hear the engine inside the cabin. That is, until you egg the tacho needle past the 3,000rpm mark. The 9-speed automatic keeps the revs low at all times, so going past 3,000 is a rare occasion. The transmission, however, is not the quickest unit out there, and you sometimes feel that it hunts for gears while downshifting. As far as straight line performance is concerned, Merc says it will do the 0-100kmph sprint in 6.1 seconds, which isn’t slow at all.

The E-Class sold in India comes in a long-wheelbase avatar so it’s safe to say, handling is not the top priority for Mercedes-Benz. That said, the E-Class does manage to control body roll quite well in Sports mode. However, it still doesn’t feel natural chucking the E into corners. and you’ll be much more satisfied driving it in a calm fashion. At sane speeds the E-Class comes into its own and you can enjoy the excellent ride quality, quiet cabin and the grunt from the torquey six-cylinder motor.

In the city the cabin feels more composed than before. And while the rear still features adaptive suspension like the outgoing E 350d, this setup now seems to control undulations better. Even at highway speeds there is much less vertical and side to side movement in the cabin in Comfort and Eco drive modes.

When it comes to safety, the E-Class really doesn’t leave much to chance. You get ABS and brake assist to better stop the car. Apart from your usual front, side and overhead airbags, there is even an airbag for the driver’s knee. Then there is Merc’s traction control and ESP which work to keep you out of trouble.

Merc is offering the E-Class in three variants, with the top-of-the-line AMG Line only available with the sportier diesel engine. The price hike is nominal by Mercedes standards, when you take the outgoing model of the E-Class into consideration.

The E-Class then remains what it always has been: an executive luxury sedan that’s best enjoyed from the executive seat in the rear. For the chauffeured owner it misses out on little and if you pick the E 350d, it will even offer a pleasurable driving experience when you occasionally take the wheel. There is also a broad range of price points and engine options for those looking to bring the E home. The E-Class is still perfectly suited not only for its current audience, but also for those looking to upgrade from a C-Class.