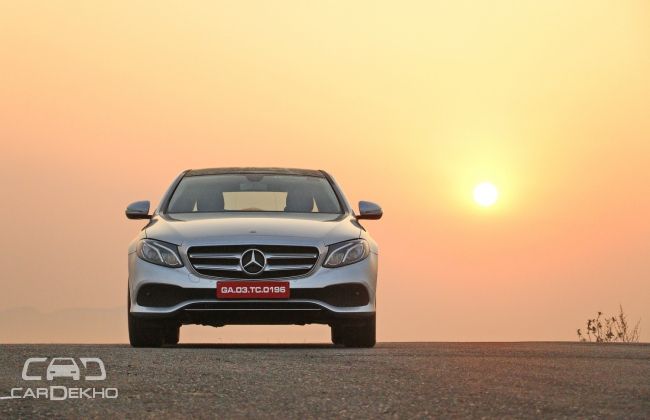 The fit-for-a king backseat experience of the S-Class is what makes most people aspire to owning a Mercedes. While the flagship remains out of reach for most, the E-Class delivers a fine sense of luxury at a much more accessible price tag. However, now with the all-new E-Class Mercedes has given Indian buyers what they dreamt of: to have an S-Class for E-Class money. The all-new tenth-generation E-Class has come to India in its long-wheelbase version, which promises a limousine-like experience in the backseat but at a mildly higher price. The new Mercedes will be going up against Volvo's very capable all-new S90 and BMW's soon to be launched new-generation 5-Series and it will also have to deal with Audi's  all-rounder, the A6, and Jaguar's new XF.  Has the new E-Class come prepared?

- Fantastic seats - help you relax no matter how long or short the journey.

- Incredible amount of space makes it feel like it is from a class above.

- Class-leading comfort in the backseat.

- Misses out on some features - cup holders at the rear, ventilated seats, and infotainment controls for rear passengers.

- Consider it as a four-seater.

The E-Class is absolutely attention-grabbing and a lot of that is because of its size! For the very first time we are getting the stretched version of the E-Class in India. This Mercedes is 18cm longer than the previous E-class and its wheelbase, an indicator of the space inside the cabin, is even greater than the standard wheelbase version of the S-Class! But, S-Class buyers in India need not worry as they are offered the S-Class’ long wheelbase version as well.

Now, while the new E-Class’ design is quite different from the S-Class, it shares the genes from the family and as such will fit right between the S-Class and the C-Class. The large swept-back headlamps with flowing rods that act as LED daytime running lights and LED headlights strengthens the connection. The prominent grille and the deep bowtie airdams on the bumper make the E-Class look a bit aggressive.

The only area where the E-Class doesn’t look very elegant is around the C-Pillar. To give sufficient headroom to the rear passengers the roof stays high, and then rolls down abruptly to meet the boot. The C-pillar also has a quarter glass there to provide a greater sense of space on the inside.

The stubby boot and tail lamps remind you of the C-Class, but the E-class has its own highlights such as the beautiful glitter-like reflectors in the tail lamps.

Once you step inside, the design for the dashboard, the incredible amount of space, the beautiful cushioning for the seats and the quality of materials make you wonder whether you are in the E-Class or the S-Class!

Like on the S-Class the E-Class has a dashboard design that wraps onto the doors; there’s open-pore (or, un-lacquered) wood, and a large 12.3” infotainment system with a touch pad for the COMAND (Mercedes’ infotainment system) system. The seats are beautifully cushioned and shaped, and motorised functions include an extendable seat base and memory functions too.

The highlight, though, is the backseat. The rear bench is split into two reclinable seats. The electric adjust allows you to alter the headrest and at the click of a button you can control the front passenger seat too. On the whole Mercedes claim that you have 50% more legroom than before, and it feels that way too. With the front seat pushed away even 6 footers will be able to lounge comfortably. The seats also hold you well and have just the right kind of cushioning to keep you comfortable no matter how far you have to travel. However, there are a few aspects that the E-Class could do better. The use of Artico leather instead of genuine leather will bother some customers, as will the lack of soft door close functionality and infotainment controls at the rear.

The E-Class is offered with a panoramic sunroof as standard, with power controls for the sunshade as well. The Chauffeur Package, which allows you to adjust the front passenger seat, is standard too. You get motorised sunblinds for both rear windows and the rear windscreen.

The small metal knobs twist with a solid feel as you close the airflow from the air-vents, the click from the roller that controls audio volume, and the rear armrest that folds out gently give you an idea of the quality and craftsmanship involved in making this car. The E-Class is also very good at cutting out the noise from outside and along with a smooth and quiet engine you feel almost as though you are sitting on some remote and lonely hillside.

The E-Class doesn’t get the full TFT display like the S-Class. While the central display is the same 12.3” unit from the S, the driver’s cluster is a combination of analogue and digital instruments. Nonetheless it looks plenty smart and can show tools such as navigation guidance on the driver’s cluster. While the infotainment system offers Apple CarPlay and Android Auto connectivity, the lack of a touchscreen reduces the ease of use. You can control the MB infotainment system through the scroll wheel, the touchpad (on which you can pinch and zoom), or swipe and flick your fingers using the touch pads on the steering wheel. But the variety of input options feels all the more confusing as the system doesn’t feel very intuitive to use. The Burmester sound system offered on the diesel provides clear and crisp audio.

The E-Class also offers drive modes to change how the car drives. There are four modes: Eco, Comfort, Sport and Sport+ which adjust suspension, gearbox and steering. The fifth mode, Individual, allows the driver to customise the settings for these parameters as per his preference. To make parking this long sedan easier, it is offered with Active Parking Assist for semi-automated parking. Also, the Mirror package includes outside rear-view mirrors that tilt down while reversing to give you a better of the surroundings closer to you.

Mercedes are offering the E-Class with two familiar engines: the four-cylinder two-litre petrol and the six-cylinder three-litre diesel, and both engines come coupled with 9-speed gearboxes that send power to the rear wheels. We tested the diesel, and although it is an engine we are familiar with, it felt quite surprising. Firstly, the engine felt incredibly smooth and quiet, perfect for a car like this. Just as surprising was the performance, with 620Nm of torque available from 1600rpm and a quick shifting gearbox, the E-Class rockets ahead anytime you push the throttle with urgency. Past 2000rpm it pulls stronger still right up to the 4000rpm mark. Mercedes claims a 0-100 kmph time of 6.6 seconds and a top speed of 250kmph. It’s important to note that the E is refreshing and easy to drive calmly too. It will cruise at 120kph in 9th gear with the engine just humming at 1500rpm or tiptoe around the city without a fuss.

The E 350d is offered with air-suspension for all four wheels and this multi-chamber system delivers quite an impressive experience. The ride quality is also helped by Mercedes India’s decision to use 17” rims instead of 18” or 19” wheels, as the taller sidewall helps improve comfort while reducing chances of tyre failure.

At low speeds, bumps and potholes seem to just vanish when in Comfort mode. But, drive just a bit faster and there is a notable amount of up-and-down movement which feels troublesome. In Sport mode the suspension firms up such that there is less body movement without compromising comfort distinctly, and as such would be the ideal mode to cover long distances in. In Sport+ the ride is much firmer, such that you can feel the tarmac’s unevenness clearly.

While the E feels tidier in the sportier modes, the sense of its length and weight when hustled through corners reduces, but doesn’t disappear.  As you dial up the modes the steering weighs up and the gearbox becomes more eager. When driven fast through bends, the E-Class is surprisingly neat for a car of this size, but it isn’t much fun. For poor road conditions, the air-suspension equipped diesel also has a Lift mode to increase ground clearance by 15mm.

The E-Class passes the Euro-Ncap test with five stars, but Mercedes claim it surpasses the standard by a significant margin. The use of aluminium and high strength steel help create a light yet rigid body and the India spec E-Class comes with seven-airbags. As can be expected ABS, EBD, and ESP are offered as standard.

The petrol and diesel guises of the E-Class will be offered in just one trim. While the diesel gets the   full luxury treatment, the petrol makes do with fewer features. Aesthetic differences include: different design for the alloy wheels on the outside; on the inside the petrol gets horizontal quilting for the seats instead of vertical; and the carpets are only offered in black. The wood finish on the petrol is brown, rather than black. Some features that customers opting for the E200 will have to give a miss include the 13 speaker Burmester Surround Sound music system, memory seats for the front passenger, and the 360 degree camera. The really pity is that the Air Body Control, the air suspension, isn’t offered on the petrol.

The tenth generation E-Class is a game changer.  Not only does it change what we expect from a Mercedes E-Class, but also changes our expectations from the segment. Yes, the E-Class could do with a bit more equipment for a greater sense of luxury, but the overall smoothness, quietness and quality of the cabin make the experience properly luxurious. The new E is also quick and effortless to drive. The only limitation of this big luxury sedan is that it feels its size when you try to drive in a sporty manner. Nonetheless, it is controlled and confident at high speeds too.  While prices aren't available now, for the chauffeur-driven the new E-Class is now the default pick in the segment.