Published On Aug 25, 2014 By Abhijeet for Chevrolet Cruze 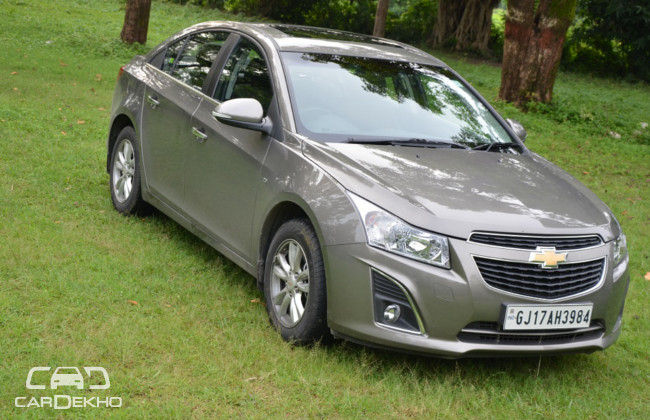 The Cruze has always been a centrepiece for General Motors in India. Its powerful diesel engine and muscular design captured the heart of many who bought it and stuck with it. Since its first iteration in 2009, the Cruze has always been considered an American muscle with brilliant styling and a bomb of an engine in the 2.0 litre guise. But with the tension between the D-segment cars building up, GM gave the Cruze some more room to breathe in.

The 2014 Chevrolet Cruze looks even more handsome now. The tiny changes on the front bumper and the chrome detailing around the fog lamps has done wonders to the appearance of this aggressive looking sedan. The mean looking front is now more rakish, like sharpening the horns on a bull.

The honeycomb grille has now been ditched for new horizontal slates, probably adding more to its sporty appearance. Another welcome addition is the indicators on the OVRMs. The sides and rear are pretty much the same as before. Another fresh detail is the new 10 spoke alloys which look better than the previous 7 spoke alloy wheels. But they would look even better with lower profile tyres and bigger alloys, just a thought for the modifying brothers.

The interior of the Cruze is now a very upmarket and modern. Seats are comfortable and very supportive. The driver seat gets electrical adjustment for the lower part. It is quiet surprising that one electric switch can give you so many variations to adjust the seat according to an individual.

We would have preferred the seat cushioning to be a bit on the softer side for more comfort, be it the front or the rear. The plastic quality is good overall with just tiny weak edges here and there. One very annoying detail is the climate control switch which gets accidently pressed, as it is located at the edge of the central console right where the knees of the driver and front passenger rests.

The rear cabin still lack an air-conditioning unit, but the front vents more than make up for the deficit. We did experience some short compressors shutoffs in the middle of the day. The rear seats are a bit disappointing on the Cruze considering it has to battle with other D-segment rivals which have considerable lead in terms of legroom, headroom and shoulder space.

The boot is spacious with enough 450 litres of decent capacity. You also get a sunroof which is a rarity in this segment. The sound system has good audio quality and multiple connection options like CD/MP3, AUX-IN/USB and Bluetooth. Another preferred addition would have been larger screen for the infotainment system and ease of access for Bluetooth telephony. But apart from these tiny niggles, Cruze's cabin is a comfortable place for long distance journeys.

Powering this mighty American brute is the same 2.0 litre turbocharged diesel engine that pushes out 163.7bhp of maximum power at 3800rpm and a monstrous peak torque figure of 360Nm from 2000rpm. Power is delivered to the wheels through a 6-speed manual transmission. Another treat in store is the new gen2 6-speed Automatic transmission. Technicians at GM have worked hard to contain the lag and deliver power as instantaneously as possible.

Though there is still a tiny amount of lag, but once past it the Cruze pins you in the seats with very strong mid-range performance. The manual variant has more instant power delivery than the automatic variant, but the advantages of an automatic are far too many. The comfort and ease with which the Cruze devours distances is amazing and you can travel long distances with less fatigue. Even the noise from that diesel has been kept in check with good insulation and all that you hear is the gentle growl of the engine.

The ride quality has been softened now for more comfort than performance. The steering is a bit heavy on low speeds but does aid at higher speeds. But we are content with the comfort levels from the suspension setup. Cruze is plaint on rough patches and has stronger breaks to sustain its own weight.

It is the winding bits of the tarmac where you really feel the big heavy Cruze suffering a bit. It does not feel too eager to enter tight corners but then all that grunt from that engine more than makes up for it. However, it is a huge improvement over the previous model in terms of drivability. The 2014 Cruze now feels more peppy and better to drive than ever before.

You might not get much in terms of looks on this facelift, but what tiny changes have been made across all dynamics are remarkable. The automatic variant now returns 10-12kmpl and is even better to drive than earlier variants. Put it in D and drive comfortably through the worst of traffic jams. Opt for the manual and you are in for joys of pinning that throttle the entire day. The competition might be strong for this one, but then it still comes with a lot of bells and whistles to be an attractive consideration.