2012 Chevrolet Cruze LTZ All Pumped Up

Published On Aug 18, 2012 By CarDekho for Chevrolet Cruze 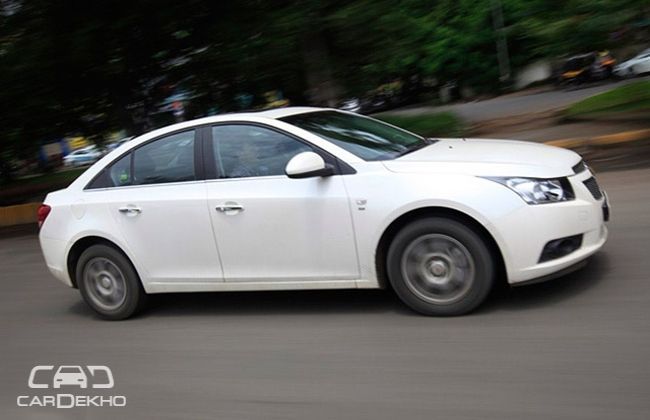 The Chevrolet Cruze has always been a good strong looker and has a very sporty design on the outside. General Motors has not messed with the design. The sporty design stays and so does the external dimensions. The broad shoulder with thick waistline makes it a eye catching car to watch.

As we mentioned the changes on the 2012 Chevrolet Cruse is more technical than cosmetic and there’s nothing wrong in General Motors retaining the external design for the 2012 Cruze as the car still looks fresh and unique.

On the inside the story continues and the changes are not so many. The things that are upgraded on the cabin of the 2012 Chevrolet Cruze include a better quality plastic used for the dash. The switches too feel of higher quality and more durable. The 3 spoke leather wrapped steering can be adjusted for height and reach manually and has the control buttons mounted on it for audio and cruise control along with a dash of silver finish on the middle spoke. The speedo cluster retains the soft blue black lit and red needles.

You power the engine and the needles run a self-check by moving out to the max limit and then back in slowly to the zero calibration. The touch of chrome on the speedo cluster housing gives a good feel. The engine start button is on the left of the steering on the dash, this button is square shaped while a round button would have looked and felt much better on here.

A electrically auto dimming centre rear view mirror comes in as a welcome change in place of a manually dimming one found on earlier Cruzes. The centre dash also remains the same with the small information screen display with blue backlit. The single CD MP3 player sits neatly under it, the control buttons for the audio system is easy to use and falls in hand.

The 2012 Chevrolet Cruze LTZ comes with a single zone auto climate control AC unit that’s placed under the audio system. The perforated metal insert along the centre dash and flowing on the centre console is also seen on the 2012 Chevrolet Cruze. The short throw gear shifter retains the leather cladding while the shifter on the 2012 Chevrolet Cruze is a 6 speeder one. The drivers seat gets a six way electric adjust, you can now electrically raise or lower the height, set the tilt and move the seat back or front. The seats retain the all black leather upholstery but now the leather quality feels a lot better.  The seat at the rear retains the foldable centre arm rest, the seats on the 2012 Cruze feel much better supportive and of premium quality as compared to the older Cruze. The other change in the cabin is that of the roof lining at the rear getting a much deeper shape which should help in increase the head room at the rear.

The biggest change on the 2012 Chevrolet Cruze is the heart. Both the old and the new Cruze come powered with a 2.0litre VCDI Diesel engine. It’s the displacement that differentiates. While the old Cruze came powered with an 1991cc 4 cylinder SOHC (Single overhead camshaft) engine that made 150PS @ 4400rpm and had 327Nm of torque @ 2600rpm. The 2012 Chevrolet Cruze gets a 1998cc 4 cylinder DOHC (Double overhead camshaft) engine that now makes 166PS @ 3800rpm and this new engine has 380nm of torque @ 2000rpm.

On paper the 2012 Chevrolet Cruze makes 16Ps of more power and has 53Nm of extra torque than the older Cruze. How is this possible? Let’s find out.  The engine gets 7cc of difference in capacity which is not large enough to make any big difference on paper, but the rest of the spec does make a big difference. The 2012 Chevrolet Cruze gets a new engine that now runs on a revised head with twin-camshaft setup, the older Cruze ran on a single camshaft setup. The new engine also gets a chain driven cam-shafts.

The turbo-lag issue on the older Cruze has been sorted out with this new engine bump. General Motors engineers have also worked on the engine mounting points which has helped in bring down the NVH (Noise, Vibration, and Harshness) on the new engine to a great extent. To go with the extra power that the engine now makes the 2012 Chevrolet Cruze also gets a reworked 6 speed manual and automatic transmission. The 6 speed manual is the one we tested so we speak about it. The gear ratios are now spread out wider across the power band and the power is now much more linear.  General Motors has also reworked the suspension setup on the 2012 Cruze which now feels much better than the older Cruze. The suspension is stiffened and that helps in improving the overall drive quality.

The 2012 Chevrolet Cruze has a better cabin insulating; the outside noise or the engine sound is kept out very well as compared to the older Cruze. The steering feedback has also gone heavier and that has been done intentionally to improve the drive feel. The engine now runs quieter and the power delivery is good. The initial power surge is decent but once the turbo hits in at near 1900-2000rpm there is a sudden kick in power and that’s when the Cruze starts to mean real business.

We did a burst of 0 to 100kmph in about 10.8seconds which is pretty good for a car that weighs 1537kgs. The top speed that the 2012 Cruze can do remains 200kmph . The gear ratios have been spread out to squeeze in the sizth gear, the 5th and the 6th gear ratio is the tallest and is best suited for highway cruising. There is loads of torque available at all speeds and the 2012 Cruze just feels a very beautiful and fun car to drive in any condition. Due to the new gear ratios you need not down shift regularly in traffic, the car stays in the power band and you just need to balance it out while in the same gear.

The new engine has also got a lot better in terms of fuel efficiency. The 2012 Cruze that we tested returned a fuel efficiency of 10.60kmpl in city driving conditions that included a lot of traffic and slow paced drives. On the highway the 2012 Chevrolet Cruze gave us the mileage of close to 16.8kmpl which is very decent in terms of the comfort that is gives in return.

The Chevrolet Cruze was always a very powerful car but the 2012 Cruze with the engine bump now is a much more fun car to drive. The design remains untouched which still looks sporty and trendy. The new engine has gone a lot powerful and silent; the suspension tweak also improves the ride and handling qualities. The much improved 2012 Cruze with all the added changes now is ready to give the rivals a run for their money.