Many people have given good rating on this car. Might be they are only looking at the engine performance and the safety features of the car, which I too term good. I am driving Automatic Transmission paying a amount of Rs 23.5L in Delhi and am extremely disappointed with its features. Being a keen and observant uses I am going to share many minute points which is important for any new buyer to be aware of: The infotainment system  provided with this high end car is outdated and looks like that Toyota is dumping its old outdated stock in Indian market. As an example, the manual of system talks about compatibility with I phone but with models iPhone 5 and 5s. While 11th generation I phone has been launched, this infotainment system is still living in its world of iPhone 5. The problems that I am facing which is giving pain to me in everyday driving are as below: 1.        It has humming noise whenever phone is connected. 2.        It can connect only to one Bluetooth device at a time. And if u want to connect to the second device, u have to disconnect the first one from the system. The biggest disappointment is that you cannot change these Bluetooth settings while the vehicle is moving. This is on the pretext of passenger safety but I have seen the first car with such restrictions. And even if the person next to driver wants to operate it, it cannot be done. You have to stop the car at the side of the road and then change these Bluetooth settings.   3.        All latest BT connected systems have feature that even if phone call comes on second phone which is not playing at that time, the system goes on mute to allow 2nd person to take call. It is missing in this system ( being extremely outdated). 4.        The system has gone blank and hanged 3-4 times in last 5 months of driving. 5.        The reverse camera & its image on infotainment system is extremely extremely poor quality. Other disappointments are: No Aux in slot in the system. USB slot has been poorly placed at the screen of system, which used to be the case in 1990 systems. In all cars of this age, it is well placed much away from the console for convenience and aesthetics. In addition to above, I also want  the feature of Auto Door Lock ( linked with speed or gear shift) as it is very essential feature for basic safety on Indian roads. Plastic used in interior is poor and does not gives the needed soft touch luxurious feel. Door Handrest at driver side is at wrong height and made with cheap PU. Handrest at Center console between the seats is also badly placed and of no use. Also it is fixed and non movable. Steering is too hard and leather cover is too hard . Overall i do not find it at all worth the price and nowhere does it showcase TOYOTA ALTIS which is available around the world. I sincerely request the new buyers to compare the minute features with other similar cars. So far there was a sort of monopoly in this segment with just Elantra being a competitor but now.. with Honda Civic making an entry, I feel that Altis seriously need to think over how to add needed contemporary features and a bit of luxurious feel in its interiors. If anyone want to get more details about the experience on this car, please call me at nine eight one eight four five five three eight four. Thanks 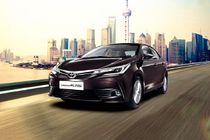