Nissan is set to launch its much-awaited Kicks compact SUV in the Indian market soon. It would be the second such attempt by the Japanese carmaker in the compact SUV segment where car such as Hyundai Creta is ruling the roost. Nissan has realized its mistake with the Terrano and now want to rectify it by launching a contemporary and feature-rich product of what is liked by most consumers today. And yes, Nissan Kicks would be loaded up to the brim with features such as 360-degree camera, 8-inch floating touchscreen infotainment unit with Android Auto and Apple CarPlay, automatic AC, LED projector headlamps and 17-inch alloy wheels. The 360-degree camera feature is a first in a class segment, in fact not available in several segments above. The feature is usually seen in Rs. 25-30 lakh car. Then there are features such as push-button start, automatic headlights, automatic rain sensing wipers, cooled glove box, cornering lamps and cruise control which makes it stand in the class of premium vehicles out there. But on the other hand, what surprised me the most is that the car comes only with 6 airbags in the top end model which is really a downside from the carmaker as Kicks is being touted as the premium car in the segment. Hyundai Creta comes with 6 airbags and that too with the automatic variant. Creta also comes with sunroof which really gives it an upper edge over Kicks. Some other breathtaking features which is not offered in Kicks include wireless smartphone charging, electrically adjustable driver seat and electrochromic mirror. In terms of styling, however, the carmaker has given a funky and fun-to-drive design something which is not seen in the Indian market before. All eyes remain on the pricing though, if it undercuts Hyundai Creta by a handsome margin then it could make a mark in the segment. The top end model of Creta costs around Rs. 18 lakhs (on-road), if Nissan can manage to close the price bracket well within Rs. 15 lakhs, I think it would be a great buy.

Creta is outdated as compared to Kicks, kicks is more balanced and safe, it's around 160kg more heavier then creta. 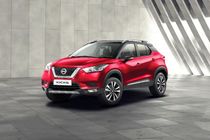