The Beast is really a Tough Utility Vehicle

The Beast is really a Tough Utility Vehicle

I had my Beast TUV300 purchased in Aug. It had completed the three services and travelled 29000KMs. I had travelled all across Telangana and Andhra Pradesh through the Country Roads, Congested City Roads, Ghat roads. I am so delighted to drive across all the different road forms. I had tested it on highways at 160KMPH. There is no difference that the passengers felt whether driving at 80KMPH or 160KMPH. I am disappointed with the fuel information that is displayed in the vehicle. Its behaviour is weird. When I purchased, the T8 mhawk100 was the high end and I would be pleased if Mahindra had offered Reverse Camara and Touchscreen with GPS in the Infotainment. After I had purchased T8, in 2 months time Mahindra had released T10. It was unfair from Mahindra that they kept secrecy on T10 release. On the performance side, I am highly satisfied with the Beast. In the city, I always use the ECO Mode to control myself from Speeding. Once I get on to the Highways I release the ECO Mode. Even in ECO Mode, it touches 120KMPH mark. On the Mileage side, initially, I started with 12KMPL on city roads and on highways it was 13-14KMPL. After the 3rd service it started giving 14KMPL in the city (with ECO mode on) and on highways it was 16KMPL. I feel proud while driving this Beast and overtaking the Breeza and Creta vehicles on the highways. 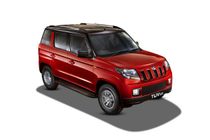