I recently bought the Mahindra KUV100 after much deliberation between the jazz and the baleno as other options. I must be very honest when i say that i opted for the car predominantly for its lesser waiting time. That apart, the car itself was an amazingly pleasant surprise. It is a mini beast with the mFalcon diesel engine which gives the upwardly mobile urban class the SUV experience while also keeping in mind the space crunch of the city. The upright seating, the amazing and brutish front coupled with the wraparound sunglass appearance, the DRLs and the unique rectangular fog lamps brings one word to mind , "funky". While all these are great talking points, what impressed me most was the availability of ABS & dual airbags. Also the mHybrid tech on the top end variant is amazing to use in traffic situations where "start stop go" situations arise aplenty. The claimed mileage was 23 for city drives and 25 for highway drives & I must say I was pleasantly surprised to see the figures come somewhat near the claimed figures!! At first, the car seems very cramped when viewed from the outside, but hop in and you realize that there is a lot more to it than meets the eye. The rear can seat three people relatively comfortably. This is because of the flat floor and the wide seats with amazing back support. The windows could've been a bit bigger.The small windows take away some of the airy feeling that the back seats provide otherwise. Even the front, which has a foldable middle seat for those situations where you need to squeeze in an extra passenger, is fairly comfortable albeit for short drives or city riding. Long distance drives in the front middle seat can be very uncomfortable and poses a risk at high speed as the middle passenger can get the gear lever hitting them on their chest. Otherwise, the middle seat can be folded and makes for an amazing arm rest for the driver!!! The storage compartments all over the car make up for the very modest boot space. I found the space below the passenger seat next to the driver & the secret storage in the back to be extremely helpful when lugging stuff around. The cooled glove compartment is a fancy addition which doesn't serve much purpose practically. The sunglass holder on the top near the car night lamp is a cool addition too. What was a bit off putting about the car was the fact that the handbrake feels a bit dodgy while engaging. Often the handbrake doesn't feel like it has engaged. The 3.5 inch music display system could do with an overhaul but it fits in the floating dashboard perfectly. I wish to check with Mahindra if there are any aftermarket options available for the infotainment system, preferably an Apple CarPlay system that I can install at a later date. Parking sensors & reverse cameras are another point of concern seeing as they are not available even in the top end K8 model and have to be installed aftermarket. Overall it is an amazingly made car from Mahindra that lives up to its billing of being a young SUV making it an ideal city ride and doubles up as a weekend getaway car without breaking a sweat!!!!!

2 comments
1
A
a premkumar

i bought kuv 100 nxt all specifications and performance is best, but this is not suitable for off road, they are attracting us by advertisement with the word it can, if you can, they are showing it will go kill and uneven surface road but this not truth. in my city tiruvarur road not in good condition after one month from the date of purchase 03-11-2017 today 27-12-2017 the car body fittings loosen, fitting gaps more than before so this is not suitable for off roads or unconditional roads.

i thought of buying this Mahindra KUV 100 for a stylish mid size SUV , smaller version for its powerful engine & style, but while going through all the review here, I never expected it to become so much inferior quality and a super flop , that now I changed my mind and will look for some better option with Hundai , Renolts & other car makers in the same segments. 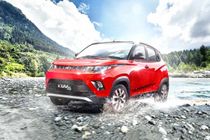