I bought a KUV100 K2 petrol Variant. I have bought the car May-19-2017 from Srieesh Auto Bangalore and been using the car since then. As far car design is really good and good control/pick-up. My car, getting out-side foul smell while AC is on and has rattling noise heard from inside at low speed, which is bad. At high speeds, the car goes smooth. The major problem is mileage where as I am getting only 10 km/ltr, which was informed to the dealer and it was told to me after 1st service it will get rectified. I travel nearly 50-55km every day. I bought this car seeing all reviews on multiple web sites, and took a decision thinking Mahindra had taken a bold decision to trust Indian Engineers and also can resolve these issues. As many customer has complained of mileage issues, and some customers also said it got rectified, keeping that I decided to go for kuv100 k2. While giving for 1st service it was intimated to service centre of Srieesh auto Marthahalli Bangalore, about mileage, foul smell entering in and few other problems too and they said they require the car to be left for 2 day to rectify all issues. But in 2 days I had to spend nearly Rs.2000 for commuting by ola/uber taxies. But I was in the impression that all problems gets rectified, but it was in wain. But after 1st service, mileage has not changed, it remained with 10km/ltr on city, I had followed all instructions of driving as they had said, as this is not my 1st car and I have been driving the cars past 25 years, earlier I had Maruti Alto and it was 8 year old vehicle and I was getting 17km/ltr as an average full tank to full tank. But whereas other Alto car owners and service centres was claiming you cannot get more then 14-15km/ltr. I am telling Mahindra to know that I knew how drive. Foul smell they said they need to remove dash board but, even that was not rectified. And there are other problems which are also not rectified. The problem in the car can be rectified if Mahindra has given proper training to its service engineers and proper quality assurance people in the plant, i know this is totally irresponsibility of quality personal who have not checked the car before it is out from plant. Quality is not just 6sixma or any certificate quality courses pass out, it need to come from heart to see that we Indians are not making fools of our own brothers/ sisters. Nevertheless, the car looks good, the drive is also good. The gear shift is also very smooth and useful. But that is it. The windscreen also takes a lot of glare in the night which makes the driving at late hours uncomfortable. Headlights are also not focused well. I will recommend this car provided Mahindra puts a proper quality output and speedy action for rectifying the issues, by giving proper training and responsible. 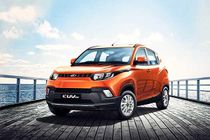 Mileage is very poor only 10km/lit