Honda Civic has been a car which has a strong fan following in the country. And this comes with the fact that only one generation of this sedan has been sold in India, so one can assume the amount of craze this car has. The first generation model was sold in the year 2006-2012, and impressive enough to get an overwhelming response across the country. The reason why people are gaga over it is its futuristic design and a nice blend of comfort, reliability, premiums, and driving is a pleasure. The 2019 and the latest generation model will be launched next month and I am desperately waiting to buy it. Reason? I have seen the immensely positive response in a number of reviews online so far. In my opinion, the car evolved into a mature and premium executive sedan and at the same time hasn?t lost that fun-to-drive and sporty character during this transformation. At the equipment front, the new Civic gets 7-inch touchscreen infotainment, dual-zone climate control, 8-way power adjustable driver seat, sunroof, push engine start/stop button and automatic wipers. The car also gets a segment first lane watch camera system. On the safety front, it gets 6 airbags, ABS with EBD, hill start assist, reverse camera and stability control among others. Having said that, it is also worth mentioning that Honda Civic has earned 5-star safety ratings ASEAN NCAP crash test results. The car will come with two engine options; the 1.8L 141hp petrol with CVT and 1.6L 120hp diesel engine with 6-speed manual gearbox. Since I am looking forward to a fuel efficient vehicle, I will be choosing the diesel engine as it returns impressive 26.8kmpl. The car will rival the likes of Hyundai Elantra, Skoda Octavia and Toyota Corolla Altis in the segment. Though it would be a tough segment to crack, looking at the level of fan following it has in the country, it seems the latest version would be good enough to attract a bunch of buyers every month. Fingers crossed.

4.7/5
Based on281 User reviews
Write Your Review
Civic Reviews 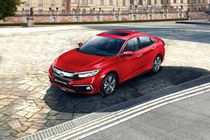