My family owned three generations of the car(2nd,3rd&4th), it's like I've grown up with them reflecting my sheer love for the City. It's a quintessential C segment car. The City has contributed a lot in making Honda a synonym for reliability and luxury. When you're buying a Honda City you know for sure that you're investing in an upmarket product. But that's not what makes the City the legend it is considered, major portion of the credit goes to the soul of the car which is engineered gem the 1500cc I-Vtec petrol engine. It is considered to be the epitome of mid-size internal combustion petrol engines by a lot of automotive engineers. The engine is very refined, it's quick of the line, it's got that peppy mid-range, it's rev happy and at the same time aptly fuel efficient for a petrol engine of this displacement with 13-15 kmpl in the City conditions and 16-17.5 out on the highway. It lets you take those quick weekend spins without being harsh on your pocket for sure. Even though the Diesel engine of the city is not as a legend as a petrol still it has managed to give it's contemporaries a run for their money and has ticked all the right boxes. As much as it is a drivers car, it has been a delightful experience for the passengers especially the rear occupants, it's got the best in class seats which is as comfortable as it gets even though getting in the car is a bit hefty due to it's low profile but that is something which can be neglected. The ride comfort is great thanks to it's suspension setup and is able to absorb the pits and potholes on the Indian roads. The built quality of the cars is top notch both on the exterior and the interior and I can say that because we've had our 3rd gen City since 9 years and it still hasn't had any major maintenance expenses for which the credit also goes to Honda for having a reasonable maintenance cost and exquisite after sale service. All in all our experience with Honda City has been phenomenal and we look forward to further generation changes in the car. 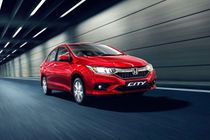