DC Avanti means Dilip Chabriaya. The famous man about his car modification.DC is a very high performance car. Or it is know as low price sports car. I have experience the avanti.Its in my society. It is comfort. i loved the car most. But is is petrol varient and it is not auto transmission.DC has unveiled a special edition Avanti 310. It is a limited edition as only 31 units will be made. The 310 in the name stands for 310 BHP which is a massive 60 BHP more than the regular version. Tuned through the same engine.The DC Avanti will be the first made-in-India supercar when it is launched for the Indian market. The Avanti in concept form was unveiled at the 2012 Auto Expo and then for the 2014 edition, DC Design brought the production- ready version of the car.The Avanti appears to have been modelled on the lines of the Ferrari 458 Italia. The nose of the car is dominated by a massive mesh air intake and trapezoid bumper. The head lamps are bi-xenon units while there are LED DRLS shaped like eyebrows for the headlamps. Keeping true to its sports car heritage, the Avanti has a long and low bonnet that dips in the middle giving prominence to the DC logo and a single air vent located on top.The side profile is low and long with a sharply raked windscreen and rear roofline that disappears into the engine bay behind the cabin. The Avanti is a two-seater with the entire cabin being kitted out in what appears to be quilted out leather. This material is on the seats, dashboard, doors and space between the seats. The instrument cluster, steering wheel and more noticeably the AC are all basic units. We expect that DC will offer some more additional features, which will be standard in the segment, when the car is launched.

4.2/5
Based on33 User reviews
Write Your Review
Avanti Reviews 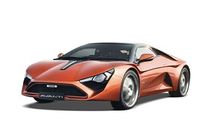