Passing my college, I was in search of an affordable hatchback with a striking design. That time, Datsun Redi-GO was just launched and without delay, I took the test drive and bring it home. I have been driving the vehicle for 2 years now, before that we owned the small family car Nano but my father need to buy a separate one for me. During the test drive only, I saw the potential of the car as how swiftly it was handling corners and turns while the pickup was great and I never felt the engine was hassled. Datsun Redi GO was first revealed at the 2014 Auto Expo as a concept. With the launch, it marks as the third offering from the Japanese automaker that joins the Datsun?s budget offering. Datsun Redi GO is based on the similar CMF-A platform as seen in Renault Kwid but the design is completely different and positioned as an urban car. The manufacturer has done an amazing job with Redi GO, the front fa�ade is dominated by a large hexagonal grille with chrome accents. Wraparound headlights get a sleek design. The side profile gets two distant character lines that go along the length creating many layers. The inner profile of the car is fresh and appealing unlike its Datsun sibling, the dashboard features numerous cubby holes. Instrument console gets big dials. While for safety, it gets driver airbag as an option in the top-spec model while no ABS is available in any variant. Feature list seems to be short as it?s a budget car but since I need a good daily commuter, it didn?t matter. Datsun Redi GO shares the engine with Renault Kwid, it gets the same 0.8L engine that produces 53bhp and peak torque of 72Nm. The 1.0L engine can generate power output of 68PS and maximum torque of 91Nm, available with an AMT unit. Overall, its youth-centric design is its strongest highlight while the competitive pricing has made it popular among its league. It has flaws, but at Rs. 2.50 lakhs, you can?t complain much. 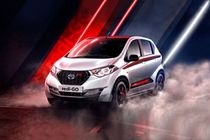