Cruze away on the highway

Cruze away on the highway

I have owned the Chevrolet Cruze for a while now, and if I were to give my opinion in one word, it will be 'satisfactory'. Now let me elaborate my experience of owning this Chevrolet product, which is more of a disappointment. Frankly, I fell for it because of its looks. There is no denying that this one is a stunner, and from what I had heard, it felt like a cockpit in the inside. And that is true indeed. And the 2.0 engine under the hood doesn't fail to impress either. In fact, it only complements the looks of this mean machine. However, the pickup is a major turn off, especially in the fourth and the fifth gears. I mean what's the point if you can't enjoy stepping it up once in a while? Plus there is some issue with the clutch too, feels a tad bit difficult to handle. Also, the ground clearance keeps you from really enjoying the ride, especially in the city. On the contrary, the wheelbase does save you some scratches, but the bumper is always at risk. That said, the mileage scores a 'decent' on a scale of poor to excellent. However, as tempting as the interiors may look, they aren't as comfortable as I thought they would be. The backseat is cramped but gives ample space for the driver. On the other hand, the air conditioner isn't as sturdy for a car like Chevrolet Cruze. The electronics of the car could have done better. Talking about battery life, they could have done so much better than the mere average of 15 months. At least that is what I believe when I drive a car like Chevrolet Cruze. All in all, this Chevrolet beast is best suited for the highway, but I would advise driving with caution within the city. 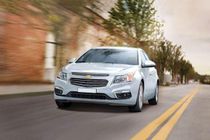