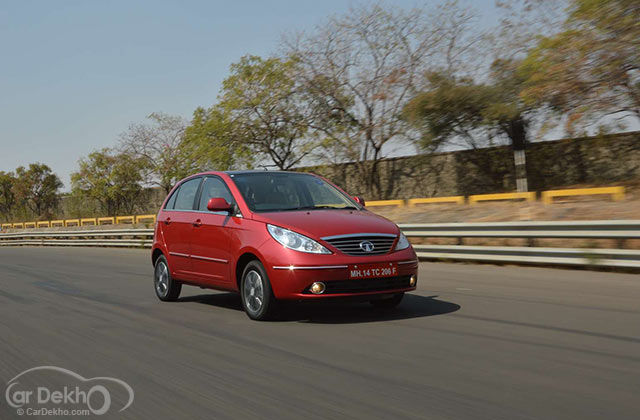 The second-generation of Indica— the Vista— has been around since August 2008 and last year it has seen an upgrade, which made it more premium with added new features and improved interior quality and plastics.

With the rising cost of petrol, Tata has gone ahead to introduce a power hatch for those with adrenaline rush. But the vehicle doesn’t just have changes to the engine; it gets a lot more changes also. We drive the Indica Vista D90 and share our first hand review with you.

Indians love to see prominent difference in the variants if they buy an expensive variant of the car. They will want the badge to shoot out loud that theirs is the top-of-the-line version. The Indica Vista D90 is available with VX and also new ZX+ variants.

The ZX+ will be available with a special body kit, which will include body-kit for bumpers and also a spoiler.

The Indica Vista D90 gets the distant D90 badge and also the ZX+ logo on the range-topping model. The D90 also gets a different contrast roof and this is common across the range.

Tata has further upped the ante as the ZX+ gets a lot of changes on the inside and also upgrades. The most prominent change on the Vista D90 is the instrument cluster that has been moved from the centre to right hand side. Also the D90 gets driver information system that reads temperature, fuel efficiency, range to empty etc.

This makes it easier to read the dials, as it is just ahead of the driver.

The ZX+ gets a lot more bells and whistles than the existing ZX Vista. It gets segment first touchscreen music system with satellite navigation, other features include automatic climate control. Now, this air-con works with a different concept, it senses the amount of sunlight and adjusts the temperature accordingly, rather than just maintaining the set temperature.

Other major change in Indica Vista D90 is the insulation. After speaking to the product team, we learnt that a special insulation material is being imported from Germany for the D90. This helps to cut out the outside noise and also reduces the in cabin noise. Indica Vista has always been a spacious hatchback, and this plus point is still retained.

The same 1.3-litre quadrajet engine block propels the Indica Vista D90 like the regular quadrajet. The difference is of the turbocharger. It gets a variable geometric turbo that spools at even lower rpm reducing the lag and also produces 15 horses more than the conventional quadrajet engine. These added 15bhp do not make the Vista go that faster, but it does improve its in-gear acceleration. This makes the Vista D90 more drivability with ease and one can potter around in city traffic, even when in a higher gear. The need to downshift does not exist. The low-end torque is decent, but is better than the 75bhp quadrajet.

The gearing has also been revised, and the ratios are tailored to suit the driving conditions in city traffic and also for the highway. This has made the torque more usable and the vehicle does perform well. This car will shine when it is driven on an open road; this is where the work of the 15 horses will be more prominent.

The ride of the Vista was always good and we had bragged about it even in our Indica Vista quadrajet reliability report. The ride suppleness is excellent and it does seem pliant on low as well as high speeds. The suspension does a good job of absorbing the jounce and rebounds.

The suspension of the Vista D90 has been tweaked for better handling; this included some changes in the torsion beam reducing the body roll. The handling of the Vista D90 is better as it has been made to cater the youth or rather the enthusiasts who wish to go faster. The steering is also responsive, but to our dismay the feel of it is artificial and we wish it left from connected.

With the growing economy, people are gaining in status, wealth and also demands. The Indica Vista D90 targets these set of people as it doesn’t just get an engine upgrade, but even it has more bells and whistles to offer— some of which are segment-first. The improved driving diminuendos for sportier drive and also the improved NVH levels makes the Indica Vista one of the best hatchbacks in its segment.