The journey for Skoda in India has been quite wavy with all highs and lows in Indian market. At one time, it tasted big success with its first entrant- Skoda Octavia way back in 2002, followed by the classy sedan Skoda Superb in 2004 and the exuberant-Skoda Laura in 2006. Skoda floated its first small car-the Fabia in 2007 followed by the crossover Yeti SUV that launched in 2010. The Octavia remained the best seller in India for an indefinite period until it was phased out recently. This resulted in a void between the segment above the Fabia and the Laura. Skoda India realized the gap well in time and has readied its bridging product called ‘Skoda Rapid’ to fill the vacancy. The Skoda Rapid, going to launch on November 16th, 2011, would be the 6th offering from the European car maker. Skoda has aggressive plans with the Rapid for India and it would tag Rapid with a price that itself will call for footfall very competitively. 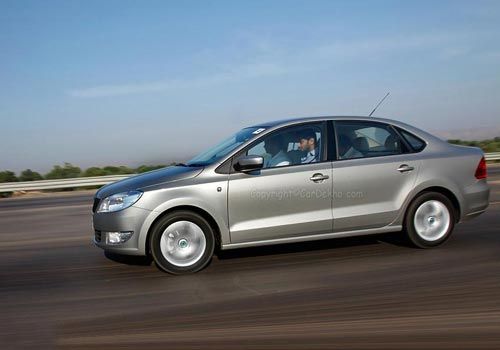 We drove the exotic Skoda Rapid from the Pink city Jaipur enroute 200kms to a nearby town named Mandawa in Rajashtan. Read on to know all on our encounter with the Skoda Rapid.

The Skoda Rapid shares its dimensions with its cousin the VW Vento. At first glance the Rapid reminds a lot of the Vento especially the side profile. Like the Vento, the Rapid has rich and solid lineaments on the outside. The Rapid gets the typical Skoda nose with the large stretched headlamps doing their bit.

The headlamps on the Rapid are slightly larger than those on the Fabia. The centre grille sports a chrome band that runs across the grill and the typical Skoda slats in black under the band makes the very typical nose for the Rapid. The Rapid gets a new bonnet with a slightly pouted design and new fenders that look larger than the ones on the Fabia. The Rapid gets a pair of large fog lamps and the front bumper incorporates the air dams that is placed low and wide. The Rapid drives on 185/60 R15 spec Apollo Acelere tyres with a five spoke alloys making matters interesting.

The side profile on the Rapid is very similar to the VW Vento that includes the doors, glass area and the rear quarter glass, the waistline profile of the Rapid looks very elegant and pleasing. You get blacked out window frames and body colored door handle and wing mirrors on the mid (Ambition) and top (Elegance) variants on the Rapid along with a roof antenna.

I personally like the rear quarter glass that is nicely angled on both the Skoda Rapid and the VW Vento. The only area where Skoda designers have shown their art is the rear.

The rear of the Rapid gets a pair of fresh looking tail lamps that have a kind of `C` glow on the brake lamps when in action. The boot lid gets an angular press, looking like two dents; on both sides of the registration plates that make the rear end look different to the Vento’s. The rear bumper has a clean look on it; we missed the rear park sensors that have become a norm in this segment.

The Diesel Rapid gets TDI decals while the Petrol gets the MPI on its boot. That said, the Skoda Rapid looks beautiful from the outside, it has a wider stance than the Fabia with dimensions identical to the VW Vento’s. Fit and finish on the Rapid is of typical Skoda superior standards with esteemed paint quality as well.

Things upon getting inside the Rapid look a lot similar to the VW Vento. The Rapid gets a nice dark and light beige colored dash board. The steering is a four spoke affair with a nice chrome insert on it that makes the steering look rich.

All the Skoda Rapid variants get height and telescopic adjustable steering. The steering is leather wrapped and feels meaty to grip. The instrument cluster is a two pod affair with a green back light on it and green lit needles and all the tell-tale trip computer in the middle which includes the digital fuel meter, clock, distance to empty (DTE) and trip meters. The center console is at a slight angle towards the driver.

The AC vents can be opened or shut individually. A single MP3/CD with radio unit comes with the top end Skoda Rapid Elegance. This unit also has an AUX socket doing its duty. The music player did a very good job by playing some good acoustics through the four speaker setup on our journey. Under the music system is the single zone climate control unit. There’s a nice chrome strip around the center console that gives a gracious feel to the equipment control on there. The gear shifter on the Rapid automatic and the manual get a different gear stalk as compared to the VW Vento. The Rapid gets a large sized glove -box that has a shutter constructed of high quality plastic. The upholstery on the Rapid Elegance is of decent light colored material. The driver’s seat gets height adjustment and a height adjusting center arm rest that has a little bit of storage space under it.

The front seats are comfortable and well cushioned. The rear seats get a firm cushioning, a foldable center arm rest and height adjustable headrests. The rear seats are well contoured and offer good support. The rear passengers will also get an AC vent that is placed behind the center console in between the front two seats. The Rapid gets reading/cabin lights in the front and also at the rear. The front passenger seat can be pushed forward from the rear using the knob on the front seat ala the VW Vento. The Rapid has a lot of storage bins spread across the cabin area, door pads get bottle holders on the front and the rear.

The Skoda Rapid has a nice bright cabin made of very high quality plastics and switches/knobs etc. The seating system here in Skoda Rapid renders high comfort levels and the equipment level on the Rapid is good. The light colored cabin and upholstery gives a large and airy feel to passengers.

The Skoda Rapid shares the power-plant lineup with its cousin the VW Vento. The Diesel Skoda Rapid variant machinery is powered by a 1.6 litre TDi unit that makes 105PS with 250 Nm of torque on it while the Skoda Petrol Rapid variant gets a 1.6 litre MPI unit that also makes 105PS of power and has 153Nm of torque on tap. The diesel variant comes powered with a 5 speed manual gearbox while the petrol guise gets the 6 speed auto gearbox option along with a 5 speed manual one.

The Diesel Rapid is the one that everyone would be more interested in seeing the hiked petrol prices. We drove the 1.6 TDi diesel Skoda Rapid on our way to Mandawa. The TDi unit is highly refined and the in cabin insulation is real good. The gear shift is slick and precise. Gear ratios felt slightly different to that of the Volkswagen Vento’s. The drive feel is good and super refined. Power delivery on the Diesel Skoda Rapid is quick and has a linear feel to it.

The drive is composed and the Rapid feels calm and relaxed when put into the corners or when put at sharp bends. We did touch speeds of 170kmph on open stretches to Mandawa and the Rapid felt at-home and much planted. The Rapid diesel pulls rather well once it reaches the 1600 rpm and has enough punch right upto the 5000 rpm. The Suspension setup on the Rapid is also a bit different as compared to the Vento. As mentioned, the refinement level is high and the Rapid is a fun car to drive when you want it to. Overtaking was a breeze on the highways and not much downshifts were needed on the Rapid diesel.

The Petrol Rapid Automatic that we drove on our way back to Jaipur from Mandawa with the 1.6 litre MPI engine that are identical to the Vento also had a good refinement level on it. The 6 speed autobox is intelligent and ratios nicely spaced out, you also have a manual tiptronic option on it just for those who want to be in command of the gear shifting. Braking on the Skoda Rapid Diesel and Skoda Rapid Petrol is precise and spot on aided by ABS and Brake Assist that ensures that things fall in place.

The Skoda Rapid also gets the rough road package on the Elegance variant.

Skoda cars are known for their safety features and the Rapid also gets to the safety levels.

The Skoda Rapid may share a lot with its cousin the VW Vento on the out and in but there is a thin line of difference in the way the Rapid drives and handles differently to the Vento. Like any other car from Skoda, the Rapid is also very sturdily built with top class exteriors and in-cabin materials.

Equipments and safety levels are high. The 1.6 litre engines both petrol and diesels are highly refined and competent units. The Diesel unit stands out in terms of drivability and power. The drive quality is good and typical Skoda with a lot of fun factor also on the Rapid.

We are sure that Skoda would be pricing the Rapid a bit lower than the VW Vento to have an upper hand over the gang of rivals i.e. the Ford Fiesta, Honda City, Suzuki SX4 and the segment leader the Hyundai Verna.

The real price game will begin when the Skoda Rapid will be launched on the 16th of November.