Replacing a DSG dual clutch transmission with a torque converter automatic in an enthusiast-centric sedan might not have been the wisest of decisions. Unless, the new automatic is as good… or better? 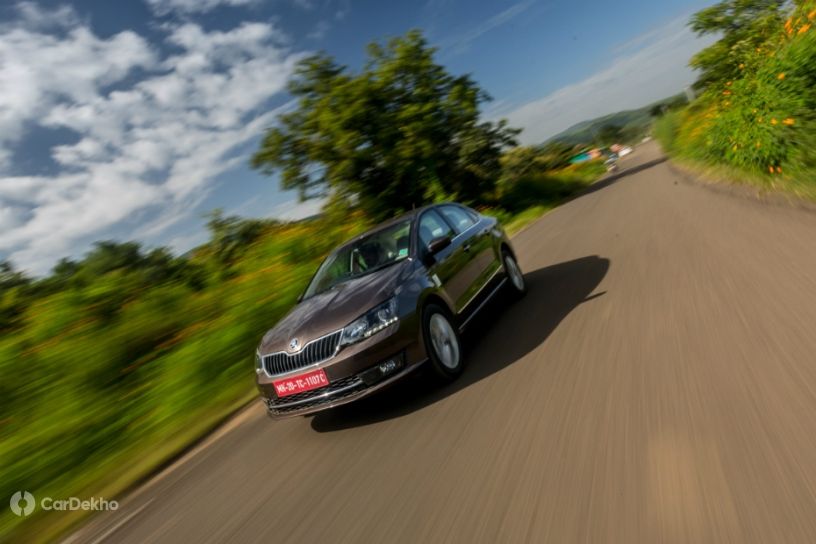 The Skoda Rapid has long been the choice of the more polished and driver-focused buyer in the premium sedan space. Reasons for this are simple - solid quality, impressive powertrain and dynamics that could put a smile on your face. In 2020, while most of this formula remains identical, the powertrain is now all new. The 1.6-litre DSG combo has been replaced by a more humble 1.0-litre turbocharged petrol AT primarily to keep costs in check. This “upgrade” still costs you Rs 12.99 lakh ex showroom, which is Rs 56,000 more than before in this Style variant.

We have driven the new turbocharged engine before in the Monte Carlo variant and were mighty impressed by it. You can read about it right here. This review will only focus on the automatic. Is it good enough to be considered in the same league as the DSG?

The praises for the 1.0-litre turbocharged engine were high when Dhruv drove it with the manual transmission. Having driven it myself, I can confidently say that it is among the most refined 1.0-litre, three-cylinder turbocharged engines being employed in the country. It makes a healthy 110PS and 175Nm of peak torque. At idle, there is a mild pulse-like vibration coming into the floorboard, but that just vanishes if you switch off the air conditioning, or simply give it the slightest of revs. Also, the engine sounds unlike a three-cylinder, which is a compliment. It has a basy note down in the rev band and does well to hide its three-cylinder thump when you get racy. It's punchy too. Power comes in strongly close to 2000rpm and this will propel the Rapid forward. It even manages to keep the momentum going by revving all the way up to 6000rpm. However, it does take time in picking up from lower rpms in daily commutes, till the turbo kicks in.

This is where the new transmission comes in. The Rapid’s engine feels the strongest in the mid-range and the transmission has been tuned to complement that nature. Depending on what kind of a driver you are, this will either make you enjoy your drive or get you a bit annoyed.

Quick With the Right Foot

If you are an enthusiast driver who loves going for gaps and is often driving closer to the speed limit than most, the Rapid is going to be a rewarding drive. Because going under the turbo will spoil your experience, the transmission always holds revs high. This means it does not upshift until the next gear too is within turbo range. This gives you a clean and fast acceleration no matter when you put your foot down. The downshifts are quick and can be felt in the cabin if you ask for an aggressive downshift. The shifts, both up and down, are quick and the transmission remains on point to respond to your throttle and speed changes. In fact, this is the one area where it betters even the DSG. This AT doesn't get confused when you ask it to downshift in quick succession.

Switch to Sport mode in the Rapid and it now holds revs as high as 3500rpm even in low throttle situations. This means you can always hear the engine working hard even when you are cruising in traffic. The downshifts become further aggressive and this time, feel jerky as well, something the family might not enjoy. The only time you’d need this Sport mode is when you find an open patch of road and want to enjoy the full potential of this new engine. Do so and the Rapid gets to 100kmph in 10.7 seconds. Pretty quick for a sedan of its weight and class! The Verna’s 1.0 turbo-petrol DCT reached 100kmph in 12.03 seconds, whereas the Honda City CVT took 12.74 seconds (wet). It’s because of this personality that the Rapid is a delight to drive on the highway where it returned an efficiency of 17.30kmpl.

Lazy With the Right Foot

However, where this powertrain falls behind the older one, and even the competition is in its ability to commute calmly. If you usually drive the family around and want a smooth drive, this powertrain might not satisfy you. To keep you in the powerband, the transmission is holding high revs, and this makes the Rapid a bit too aggressive to just calmly crawl in traffic. This nature helps in overtakes, with a 20-80kmph kickdown time of 6.59 seconds, quicker as compared to both the Verna DCT (7.78 seconds) and the Honda City CVT (7.25 seconds). At the same time, it makes the Rapid feel on the edge. A comfort here is the Rapid’s tested city efficiency of 13.67kmpl.

There are some other factors too that make you work harder in daily commutes.The initial crawl  acceleration (starting with going off the brake) in cold starts is a bit too fast as well and will often make you get back on the brake in small spaces, making the start feel a bit rushed. However, this is less aggressive when the car does not come to a full stop, and is just picking up on its own in bumper to bumper traffic. Then, there is a bit of a lag when you are picking revs again from idle after slowing down for a speed breaker or a pedal train. This wait can be avoided by going on the throttle a bit early which involves a small learning curve. And when the power comes back, it comes in with an intent to accelerate and not just maintain speeds and cruise. Also, when you get off the gas, the Rapid often just holds revs and won't slow you down behind a slowing car. It's only after you go on the brakes that the engine braking kicks in.

This is where the DSG transmission was better. Inside the city, it let the Rapid have a dual personality. This AT feels more focused on going fast and trades off its city cruising ability in doing so. Hence, if you are an enthusiast driver, the Rapid AT will let you have a lot of fun. But on the flip side, it's not an easy going commuter.

Now, let's have a quick recap of the Skoda Rapid in the form of pros and cons.

1. Handling and comfort balance: The Skoda Rapid is among the best handling cars of the segment. The steering is well weighted and direct, and gives you good confidence to get through corners. The grip and suspension balance lets you carry decent speeds as the body roll remains well under control. All this while being able to take on bumps and undulations with comfort. The Rapid now gets reworked suspension which keeps the occupants better cushioned over speed breakers and potholes, keeping the harshness in check. Yes, it is still audible in the cabin, but you will feel the surface a lot less.

2. Rear seat space: The rear seats of the Rapid have always been very accommodating. The seat base is wide and long and offers the passengers good underthigh support. The seat back recline and contouring means you will have a comfortable time even on long journeys. Seating three is also possible, but the middle passenger will have to deal with the large transmission tunnel.

1. Infotainment experience: The new 8-inch touchscreen looks tempting. It has a vibrant display and plays videos as well from memory or other Android apps such as Youtube and Netflix. But, it feels like an aftermarket tablet stuck onto the dashboard. Also, because it's running its own Android OS, it does not support Android Auto or Apple CarPlay. As for navigation and browsing, they are inbuilt but require internet connection via your smartphone. In an era of connected cars, this feels obsolete. We had a hard time syncing contacts. As a result, incoming calls were just numbers when the phone was paired with Bluetooth. The smaller 6.5-inch screen in the lower variants feels a lot more premium to use.

2. Mobile connectivity: The Rapid gets just one USB charger, that too hidden in the glovebox. This means you have to leave your phone inside the glovebox if you want to charge it. And with the contacts not syncing with Bluetooth, you don't know who’s calling you. Hence, you will have to buy a 12V USB adapter and plug it in the centre console.

3. Styling: No doubt the Rapid still looks good. The conventional and ageless design still looks sharp. But there is nothing special about this design that might appeal to you in the modern age of cars. Atleast, the Vento now comes with LED headlamps, which are missed on the Rapid. And because it has evolved very little over the years, the new one too gets lost in the crowd of old Ventos and Rapids.

The new powertrain in the Rapid helps it retain its sporty characteristics. It's fast, refined, handles well and helps you go for gaps in the city almost as well as the DSG did, if not better. But, in order to achieve this dartyness, the Rapid had to sacrifice its easy-going nature. The transmission feels a bit too eager and keeps the engine spinning to not let you feel any lag in power. This means the car always feels racy, even while just ambling about in the city.

Paying Rs 1.5 lakh extra for this automatic will make sense only if you want a fast sedan to drive eagerly, without the hassle of a clutch paddle. Even enthusiasts will appreciate its quick shift times and downshift logic. But if you want to cruise calmly in the city, the manual is more up to the task.