The BMW Z3 and the Porsche Boxster had opened a new segment in the North American market and their sales numbers were massive. 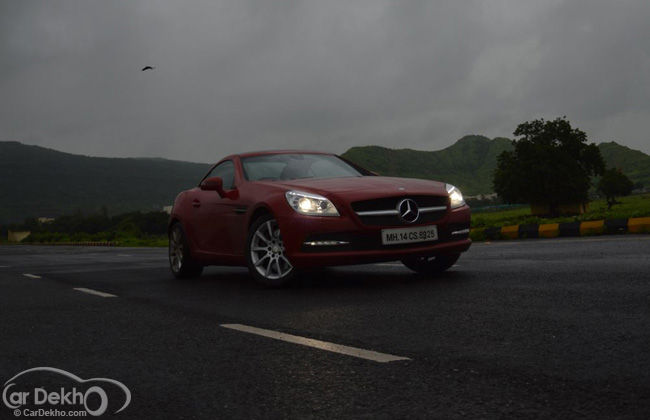 There is no doubt that Mercedes-Benz had these two sports cars in its sight when it introduced the first-generation of SLK (code named as R170). Prior to this, the SL was the nearest competition from the Mercedes-Benz spectrum, however it was a segment above.

This shooting star did disturb the BMW and Porsche party, especially the third generation. And now it comes to India to take advantage of the growing market. So, how does the SLK fare in India? Find out as the mystery unfolds.

This is the third-generation of Mercedes-Benz SLK, which is code named as R172. The roadster looks aggressive than the previous two generations, which looked rather cute. The SLK design has been improving with generations and this is by far one of the best looking.

The snout of the SLK gets the large black front grille with a single horizontal chrome slat with pulled back headlamps. The fascia of the SLK resembles that of the SLS AMG , giving it a family look. A quick glance at the silhouette and your opinion might change. The long hood looks muscular, however the oval-ishroof and the small boot look a bit of mismatch. The bulging rear wheel arches indicate muscular strength as all the 306 horsepower is transferred to road by the meaty tyres. Even the rear looks sporty with the twin-rectangular exhausts. The boot also comes integrated with a spoiler in it.

Step on the inside and you will be welcomed by the black and brushed aluminium interiors. The interior styling is somewhat familiar if you have sat inside a Mercedes-Benz before. The quality is first-rate and archetypal Mercedes-Benz. The twin-dial instrument binnacle, the three-spoke sporty steering wheel and the number pad on the centre console all remind us of Mercedes-Benz interiors. The Stuttgart-based automotive manufacturer has borrowed a leaf from its 80’s design book as the SLK gets the round air-con vents, which now even the B-Class gets.

SLK has space only for two seats, and its short wheelbase means no second row of seats. The front row seats of the SLK are large and supportive and are electrically adjustable. Just like any other Mercedes-Benz there is no complain about the seating and the comfort they offer. The leather on the seats is well bolstered and the feel of it is lavished. You almost sit on the rear wheel.

The boot size is fairly large as it swallows 335 litres of luggage in it. Our press demonstrator come with a “Vario-roof” and even after folding the roof, the boot has more than 200 litres usable space. The Vario roof is a hard retractable roof, which folds neatly leaving ample of space for the boot.

The shallow glass-in area means that the visibility isn’t that great on the SLK. You can sit in a commanding position or even be slung low depending on the adjustment of your seat. You can fine-tune your seating and the your steering wheel easily. Even the steering is electrically adjustable.

Mercedes-Benz has plonked in a 3.5-litre V6 petrol engine in the SLK350. This is the same powerplant that also propels the E350 and the S350. This mill has been beefed up to produce 306bhp instead of 272bhp, while the peak torque is of 350Nm. The throttle response has been improved and also has the alacrity of the mill. The surge created by the engine is capable of producing a bellow in your chest. Plant your right foot and the engine will pull forward seamlessly. The SLK being lighter than the other sedans that are powered by the same petrol mill, it is perkier and the shorter wheelbase further enhances the ecstasy.

The 3.5-litre V6 engine powers the rear wheels through a 7G-TRONIC transmission, which is a self-shifting box. This isn’t a dual-clutch box and yet there is no speck of laziness in its behaviour. The flappy paddles are also there to play around with. Shifts are smooth and flawless in Comfort mode, but once betrothed in Sport, the shifts and the throttle response are phenomenal.

Most of the modern sports cars are now practical and usable on a daily basis. The SLK had always been more of a tourer than a sports car— all credit to its well-tuned suspension and steering. The ride suppleness is excellent and the roadster simply glides over potholes with a muted thud. There is no jittering even when driven in the sport mode and it is well settled.

The handling of the SLK is good, and much better than the previous-generations. Push the car across the bend and the tyres follow your steering input command. The steering wheel is light, but doesn’t feel slack. The steering feels numb with no feedback, but it is responsive. The alacrity of the engine further makes it a joy to drive.

The new generation SLK has improved on the previous generation and now it even a better convertible available today. Of course the Porsche Boxster still leads the segment with its handling characteristics, the SLK350 isn’t far away. Practicality, looks and performance all are available in most of the modern sports cars.

The SLK also comes loaded with the same and fulfils all the requirements of a modern sports car buyer. The SLK350 at Rs 68.5lakh (ex-showroom, Delhi) is a good choice, but other German sports cars have an edge over it in driving finesse.