Published On Jul 18, 2014 By Kunal Kelkar for Mercedes-Benz CLA 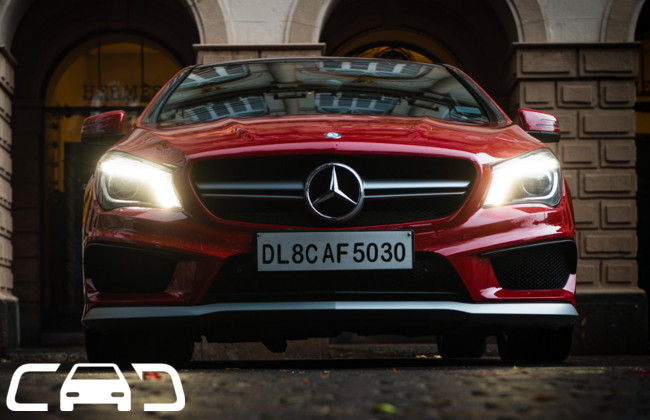 I don’t think Michael Jackson and Mercedes-Benz have too much in common, apart from the fact that he must have owned one at some point in his life. Well that was until I realized that his song, “The Way You Make Me Feel” is actually about the hottest looking “Star” that is being launched in India this month. Yes, I am referring to the all-new CLA45 AMG. The hot new girl in school that all the guy’s want to date and all the girls want to be friends with. We get our hands on the CLA45 AMG a few days before the launch and take her out for a spin.

Mercedes-Benz has put in a lot of efforts when it came to their MFA-platform cars. The A-class is a stunner when it comes to looks and based on this same platform is the CLA. The AMG version of this car is a perfect combination of poise and performance. With looks that snap necks as it whizzes by, the CLA45AMG knows how to make an entrance.  Looking at the CLA45 AMG, one would expect a slightly beefier looking car but no, the CLA45 AMG is designed to look sleek and streamlined as well a mean. With those big gaping air-intakes on the front bumper like we saw on the E63 AMG, a front splitter and a rear diffuser coupled with the ever iconic AMG exhaust tips and a body contour line that accentuates the cars sloping roof, the CLA45 AMG stands immaculate.

Adding a black glass panoramic roof adds to the visual appeal of this car as well. There is obviously the distinct AMG badging on the back and the sides of the car. The front quarter badge says “TURBO-AMG”, putting an emphasis on the brand new engine from the devils at Affalterbach. On the European and American model the car comes stock with 18inch matte black rims, which can be added, on here as an option. This car comes with 10-spoke, 18-inch rims in India; ideal for flaunting it’s huge disc breaks and distinctly red brake calipers. I was amazed to see the large capacity boot for this car. That’s an added benefit as the A-class and the B-class can hardly carry anything in their trunks.

On the inside not much is different from the other MFA-platform cars. The Interior is similar to what we have seen before on the A-class and the B-class. What this AMG gets, is a brushed aluminum dash and the distinct “Affalterbach” gear shifter. The seats, designed by Recaro are not friendly to those larger in width but at the same time they are extremely comfortable and support the driver and passenger very well. These seats can be adjusted electronically; just like all Mercedes-Benz cars and the side bolsters can be adjusted accordingly as well. The seatbelts are red in colour, matching the trim and stitching all over the inside of this beauty. Remember all this can be customized at the AMG centers across the country as per one’s personal liking.

All the good stuff is in the front of the cabin. When it comes to the rear, well just like there isn’t enough room in the back, there isn’t much to say. The seats are comfortable but the head-room is near to negligible for any adult with a height more than 5 foot 8 inches. Ideally, I’d say it’s meant for children.

One great design touch Mercedes-Benz has added is the removal of the doorframes on all doors. We know that the CLA has been inspired from the strikingly beautiful CLS, and just like the CLS, this baby four-door coupe also gets frameless doors. Good Job. Being an AMG and after having driven most of the other cars from the mad tuning house, I would have expected to see features like push-start, an electronically adjustable steering wheel and maybe even a rear entertainment system. I guess not having those premium features allows for the CLA45 AMG to be priced at where it is. The CLA45 AMG will be priced the least amongst the AMG portfolio in India.

Now comes my favourite part of this car, the engine; Affalterbach’s latest abomination, a 2.0-litre four-cylinder turbocharged misfit that produces an unfathomable number when it comes to horsepower as well as torque. With 355 horses under the hood and 450Nm of torque going to all four wheels, the CLA45 AMG is the ideal definition of a pocket rocket. The most iconic part of this engine is the twin scroll turbo the maniacs at AMG have used to give this small engine the title of, “the Most Powerful four cylinder engine” on this planet. This turbo is capable of producing 26.1 psi of boost. That’s what I call setting a benchmark. Enter the market with a brand new engine and make sure no one else comes close., that’s exactly what Mercedes-Benz have done.N

Now for those of you who consider yourself the “AMG purists” this car might take a while for you to warm up to. No, it does not have a massive bi-turbo V8 under the hood, nor does it have that distinct thunderous exhaust, but what it does have is the same ability to put a smile on your face when you give it the beans. I mean, I don’t exactly understand what people are on about when it comes to the exhaust not being AMG enough; it still gives you the same fulfilling bbbrraaappp after every full throttle shift at the redline.  The butterfly valve system changes how the exhaust note sounds based on the mode you drive it in. Higher the revs go the louder the exhaust gets.

Mercedes-Benz have equipped the CLA45 AMG with their seven-speed dual clutch system. Unfortunately this is not one of the strong points of this car. Unlike the Audi wet-clutch system, the dry-clutch system found in the Mercedes-Benz is quite sluggish when it comes to shifting. In my opinion the system has to be adapted to. Hit the shift lever at around 5800rpm with the throttle down hard and then the car will shift gears at redline. Shifting at Redline causes one to hit the rev-limiter, which in turn causes for a huge jerk when the transmission finally decides to shift.

Touch the correct buttons, twist the right knobs, pull the correct paddles and pressing the pedals in the accepted order will send the engine revving to 4000rpm before the clutch engages for a rocket of a start known as “Race Start” or launch control. No tire smoke or squeal, just pure grip, be it in the rain or the dry. Unfortunately this does not happen all the time. The precision has to be impeccable. Get it right and the CLA45 AMG will easily get to a 100km/h in 5.1 seconds. That’s what I timed it at, though AMG claims the figure to be 4.6 seconds.

The steering response is not like the normal Mercedes-Benz cars, the fluidity and slight heavy feel allows for a great response, especially when cornering. For those whining about the under steer of the CLA45 AMG, well to be as blatant as ever, that under steer is not experienced unless the car is pushed to it’s limits which can only be done on the track.

Driving the car around in the city is a delight, yes it turns heads with its beautiful looks but apart from that it is very civilized. Below 3000rpm the 2.0 liter direct injection engine can hold it’s own and doesn’t feel sluggish at all. Putting your foot down allows for the massive turbo to spool up, dumping all that recycled exhaust gas into the engine causing for go-faster mode to kick in. Power is available on tap throughout the rev range. Using the paddle shifts in the city is quite a pain, especially in the city of Mumbai. I can see the gear change on the gear indicator on the instrument cluster but the actual change happens at least 2 seconds later. Best leave it in “Comfort” mode while prowling around the city.

The CLA45 AMG has sour points countable on just one hand, but the biggest one for me would be the ground clearance for Indian roads. No matter how gently you decide to approach a speed breaker, the CLA45 AMG will scrape it’s underbelly no matter what. A sound that really hurts anyone driving this car. The low profile tires do not help too much in soaking up the bumps and potholes either, to be honest the stiff suspension does a decent enough job, but still each bump leaves the occupants of the car stirred.

When it comes to all-wheel drive, small engine super power cars only two come to mind immediately, the Mitsubishi Evo and the Subaru WRX STI. India hasn’t seen the face of the Subaru but it has experienced the punch of the Evo. In truth, the market for the CLA45 AMG and the jap tuners will NEVER intersect, but on paper the CLA45 AMG’s stats are in line with these two cars.  What Mercedes-Benz has done is gone ballistic with a car slightly smaller than a VW Jetta.

Visually, the CLA45 AMG is nothing less than immaculate. The rear end of the car is probably my favourite . The drivability is satisfying and the ease with which this car can be driven in town is something all should experience at some point in their life.  The price is speculated to be around Rs.80 lakhs and at this price the CLA45 AMG is the least priced AMG of them all yet it is quite an expensive affair especially when compared to cars in that price bracket.

Coming back to what MJ says,  “The way you make me feel, you really turn me on, You knock me off my feet, My Lonely days are gone.” Those lines are just meant for the CLA45 AMG. For being the first venture into the small engine supercars, AMG has done one hell of a job. For those looking to enter the AMG League this car makes for the perfect buy.