Published On Oct 30, 2014 By Prithvi for Honda City 4th Generation 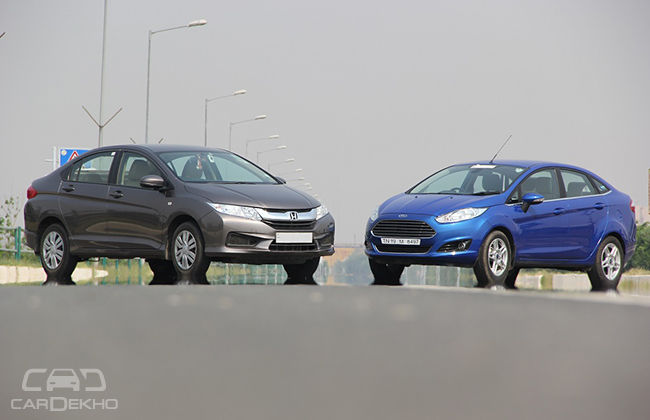 It was back in 1998 when Honda formally introduced the City into the Indian market. My first recollection of this sedan was its premium appeal which was in fact way ahead of its time and over the years became a name to reckon with. This was not just due to its value proposition, but also for sheer comfort, performance and efficiency it offered. Ford Fiesta on the other hand was introduced 8 years later to battle in the competition however this attempt on behalf of the American automaker did not reap much benefit's.

Thus to counter competition Ford referred back to the drawing board and then came up with the new Fiesta in 2011. However a couple of years down the line, in order to provide something new in terms of design and innovation, Honda this year introduced the new City while Ford brought in a facelift version of the Fiesta. So how do they really compare, let us find out.

In its new avatar, the latest generation Honda City is totally new in comparison to the Ford Fiesta which as we have mentioned earlier is a mere facelift. Head on Honda's latest H Design philosophy comes out through its design elements which make the City look sleek and agile. Its compressed headlamps incorporated with meaty chrome garnished front grille, fog lamps (available only in top end variant), a new bumper and sculpted bonnet all contribute to an eye catching design.

In comparison, the Fiesta we must say is equivalently good looking especially its hexagonal Aston Martin inspired front grille which oozes of chrome. Pulled back headlamps, pronounced hood and circular fog lamps with chrome surrounds provide an interesting design mix for users.

Coming to the side profile, there is stark distinction between the two sedans. Honda City features sharp lines and edges which attract the eye while the Ford Fiesta is more about budges especially its flared wheel arches with one odd pointed line running across from the front to the back. In regards to build quality, the door handles on the Fiesta feel a bit more premium in comparison to the City. Top two variants of City diesel offer a shark fin antenna, similar to ones seen on high end premium cars whereas a similar variant of the Fiesta caters to a normal external antenna. From behind, the City feels more appealing than the Fiesta though the compact size of the latter does raise the eyebrow at first glance.

When scrutinized deeper, City's wedged shaped tailgate instantly attracts you towards it as there is a chrome strip running across right above the number plate with elements such as sleek tail lights and a reverse camera provided for the top end variant. Fiesta on the contrary is the same as before as it offers streamlined tail lights, chrome lining which is visible on the lower half of the rear bumper and reverse parking sensors.

Therefore, the conclusion just on the basis of design is that if you are on the lookout for something that's new then the Honda City is the best bet otherwise if sporty and compact dimension is your requirement, it ought to be the Fiesta.

Going by their exterior designs, there would be a lot of expectations from the respective cabins. The City for starters has a completely new interior. Its dual tone cabin (beige and black) caters to a redesigned front dash which looks stylish yet elegant. In fact its silver accents visible one the centre console as well as on the sides provide a plush look. A new instrument cluster with bigger circular dials is a welcome change, so is the digital display for imparting key information regarding the vehicle.

Looking at the steering wheel, the moment one grasps it the feel is really comforting along with functions such as mounted controls. Centre console bearing a piano black finish is sure to appeal most Indian consumers as it also provides an integrated music system with a 12.7cm screen. This system caters to numerous features like Aux-in, USB, iPod/iPhone connectivity, radio and MP3. On the other hand, the dual tone (grey and black) cabin of Ford Fiesta would seem a bit familiar as it is identical to the one available on Ford EcoSport.

Nevertheless its futuristic design does tinkle your taste buds. We did like its instrument cluster which looks very sporty. Its centre console is not as opulent as the City but still offers significantly smaller screen which doubles up as an information display for both vehicle and audio settings. Its cell phone key pad inspired controls for the audio system has been a hit feature among many. Features like Microsoft SYNC, USB and Aux-In are all benefits of the Fiesta. All in all a major contrasting factor between the two is their climate control system of which the City offers a touch screen display whereas the Fiesta has button controls.

In the real world, the major comparison to be drawn is in the arena of comfort. The City offers leather seats on top variants whereas the Fiesta which we got for this review had fabric upholstery. The cushioning of the City's seats is impressive while the sporty snug fitting seats of the Fiesta do keep the driver and co-passenger held in one place. The interior space is far better in the City than the Fiesta particularly when we point its wheelbase which stands at 2600mm against Fiesta's 2489mm.

When evaluated there is a straight difference of 111mm between the two. Availability of rear air conditioning vents in the City will be a boon for occupants during summer which is non-existent in the Fiesta. Storage space behind the rear seat is more in the Fiesta in comparison to the City which is in fact an important aspect to consider as most of us tend to utilize the area for keeping things.

Further presence of a sunroof on the top variant of the City as against the Fiesta which does not offer one would have many takers give the Ford a second thought. To compare boot space, the City has a higher capacity 510 litres as against Fiesta offers 430 litres. However the depth in size is more in the Ford visa-via the Honda. To sum it up, space is definitely on the higher side in the City along better new interiors however the comfort factor does bring the Fiesta out on top.

For our test we picked the diesel variants of both the cars. The Honda City for the first in its entire product lifecycle was fitted with 1.5 litre i-DTEC engine which has been well received by the market considering the long waiting period on it. To point out this is the same power plant which provides its services in the Amaze with the only difference being that it is better refined and high on performance in the City.

In sheer numbers, the Fiesta has a deficit of 8.9 bhp in regards to the City but additional torque of 4 Nm. Both vehicles claim engine refinement but when it really comes down to the reality it is the Fiesta than goes one up on the City, especially in regards to NVH levels which are on the higher side in the case of this Honda. In regards to acceleration both sedans offer linear pick-up which is ideal for a swift getaway.

Another difference is in their transmission as the City caters to 6-speed gear box against a 5-speed in the Fiesta. The sporty shift on the Honda impresses instantly while the Ford holds in reasonably well to hand out decent throws through its stick.

Highly unexpected and to our amazement the clutch on the Fiesta was very light in comparison to the City which is a boon for daily commuting. Due to a soft suspension setup, the ride in City is more comforting than the Fiesta while going over potholes and broken roads.

As for handling the Fiesta outshines the City due to its stiffer chassis than holds steady on corners and curves. Crucial and important point of concern to consumers, the diesel city as claimed by the Honda does not ideally return 26 kmpl rather in town the figures ranges between 17 - 19 kmpl totally depending upon the traffic condition. While in the case of Ford its claims 25.1 kmpl which we test came out to be 19 kmpl.

Ideally we would have liked to bring in Maruti Ciaz to this party but due to its unavailability the natural progression was to test these two sedans against each other. Therefore the overall verdict of this comparison is that the Honda City will still remain the preferred choice due to the way it looks, the sort of features it has to offer, space which is plus point and performance which has impressed us along with others (City loyalists over the years).

This does not mean that the Fiesta is a miss fit for this segment, in fact the exterior design especially when it comes to the front fascia is something that will make you stand up and take notice of it. Its snug fit seats are a pleasure to be seated in and so is the handling that brings a smile on your face. End to end packaging of the Fiesta is also not bad to give it a thought.