Published On Dec 17, 2013 By Rahul for Honda City 4th Generation 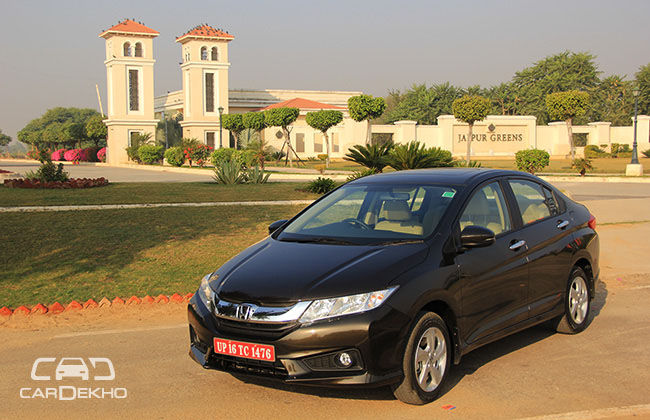 Several automotive brands have their signature products. Maruti Suzuki is till date known for its 800, Santro is synonymous for Hyundai, Octavia for Skoda and the City for Honda. The Japanese manufacturer has been the segment leader since the introduction of City in 1998, until lately when Hyundai overtook due to the availability of a diesel engine and the hike in petrol prices. This time around, Honda is prepared to introduce the new-generation City with both the fuel options. We get our hands on the fourth-generation Honda City and share our driving impressions of this new sedan.

Honda has retained the same length for the new City, however the wheelbase has been increased by 50mm. The City still resembles the previous generation in a lot of design elements. The front gets the new thick chrome grille with the H badge at the centre and fascia is a lot more sharp and aggressive. The new City is a lot more aerodynamic than the previous generation and even the styling is contemporary. The cab forward design has been continued to achieve maximum interior space efficiency.

The swage line rises along with the beltline as you move to the rear of the vehicle. The green house design looks a lot similar to the outgoing version of the Honda City, and this is one reason why we see so much resemblance.

If you think that the exteriors are similar to that of the outgoing version than the interiors are absolutely new. The new Honda City gets a newly designed instrument panel with a new touchscreen infotainment system. This does feel contemporary and a generation ahead of the previous car. The quality and fit and finish is inch-perfect. Infact the interiors of the City feel more spacious than most of the C+ segment vehicles and somewhat close to the D segment.

The three dials on the instrument cluster have a blue back light that even changes colour partly to green when you drive with a light foot. The City has a touchscreen infotainment system with Bluetooth and another segment-first is the touchscreen for climate control as well. As the car is full of tech, we will also like to address that it also has four charging points— two in the front and two at the rear. The new three-spoke steering wheel also looks stylish and upmarket than the previous generation cars. It is somewhat similar to the one seen on the new CR-V and it will also be seen on the new Jazz as well. The City also gets rear AC vents, which will help to cool the cabin faster in summers as well.

The space on offer in the new City is good and it has large front row seats. There is sufficient legroom and headroom. It does feel almost like a D segment sedan than a C+. Crawl into the rear seats and the knee room it offers will amaze you. The knee room on the new City is increased by 70mm when compared to the outgoing version. To our dismay, the rear head room is a bit tight and even the headrest at the rear is fixed. As the seat recline is good, the headroom should be fine, however it is the thigh support that should have been more. It is perfect for an average Indian with a height of about 5’7”. The boot is also extremely spacious at 510 litres of space, but the access to the boot could have better as it a tad higher.

The Honda City will be offered with two engines, one is the petrol and the second is the diesel. The petrol is the 1.5-litre i-VTEC that has propelled the previous generation too. The friction on the cylinder walls has been reduced, which means that the fuel efficiency has been bumped up. The engine now produces a power of 117bhp and 145Nm of peak torque. This is another fine example of Honda’s engine craftsmanship. The fuel efficiency of the petrol manual and CVT has been bumped up with similar power ratings. This perky engine is easy to drive with a strong mid-range. The exhaust note sweetens as you rev it and the engine being eager to spin faster even when it closes to red-line. The power delivery is linear and the engine has sufficient torque throughout the rev range. The petrol is available with a five-speed manual and CVT box too. The CVT has paddle shifts and it has a five-speed set-up if you wish to use the paddles. The gear ratios will be the same like the five-speed manual to add-on to similar power. The CVT’s drivability is good when you accelerate gradually, it is only when you accelerate hard, the response isn’t that phenomenal.

Honda City finally gets a diesel, and it is the same 1.5-litre i-DTEC that powers the Amaze. However, this comes mated to a six-speed manual transmission instead of the regular five, as the torque spread is better and even the higher end. Honda has done what we expected it to. The i-DTEC oil burner already had sufficient power and torque for the City, just that it needed some mechanical advantage over the Amaze. The NVH levels of the diesel engine has been reduced with better dampening material. The power delivery is linear and the turbo kicks in at about 1800rpm. The power produced is good enough for driving in the city and even on the highway.

The Honda City is the most fuel-efficient car because the ARAI test cycle states that this sedan returns 26 km/l. This is also thanks to the six-speed transmission that helps the City to stretch its legs on the highway without affecting the fuel efficiency. The box is slick and even the throws are positive and short.

The Honda City springs on McPherson at the front and Torsion Beam at the rear. The underpinnings are stiffer on the front, especially in the diesel due to the increased weight. The rear is soft, however it is wee bit softer than our expectations. As this was pre-production model maybe that is why the set-up was a bit too soft. The ride on smooth roads and even at high speeds is decent, and the ride at the rear is more pliant in the petrol.

The handling of the City is good, and it carries forward the existing Honda’s fun to drive image. The steering wheel is also light and easy to drive in city. The steering response has been enhanced by changing the steering ratio and this has made it even better, as before it felt a bit vague especially around a corner.

The Honda City is better, comes embellished with more features and is a lot more contemporary than before. There is no doubt that it feels like a D segment sedan, but the final verdict could be made once the pricing of this new City has been shared. This will happen in the month of January only, until then it’s a game of wait and watch.