Audi’s original TT spawned quite a bit of following thanks to its very distinctive design and very capable road manners. Since 1998 the car has evolved considerably but yet managed to keep its original character intact. We drive the TT in its latest avatar to see what has changed. 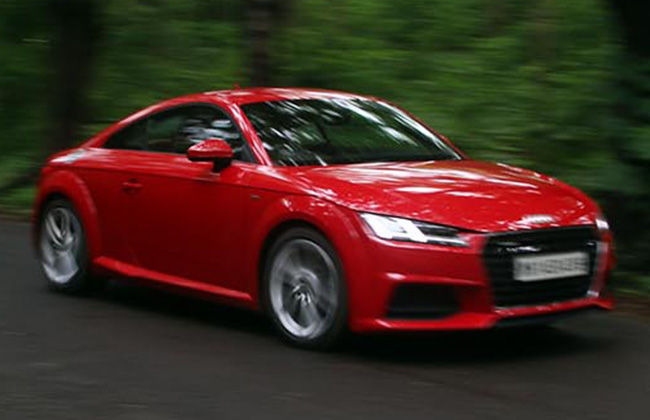 The Audi TT has been around since over a decade now and has established itself as one of the best looking and selling sportscars from Audi. While most sedans from the Ingolstadt based manufacturer do not evoke much emotion, the TT has bags of it. A proper sportscar silhouette powered by a grunty TFSI engine along with the leech like grip from the quattro system tells you this Audi means business. We took it for a spin to tell you what it’s like.

There are certain iconic designs that just evolve and do not change, the TT is one of them. While the first Audi TT was pretty extreme since it had to stand out, the newer ones have been far more subtly but just as sexy. The new TT now looks pretty much like a scaled down R8.

Everything about the car turns heads. Starting with that brilliant red colour which drapes around those brilliant Matrix LED headlights, that wide traditional Audi grille and those big airdams that look ready to suck in whatever comes in the way.

The sides are where you notice that the TT isn’t that big a car. In fact with a length of 4177 mm is smaller than the Maruti Ciaz, although it doesn’t look small at all. The distinct roofline, those flared wheel arches and that chiselled side skirt give the TT all the muscular proportions it needs. The 10-spoke wheels could be a size bigger, but then for Indian conditions this just about does it.

The rear gets LED tail lights that get a treatment similar to the headlights. The big bumper sports a proper functional diffuser that also boasts those twin lovely tail pipes at either ends. The party trick however is the spoiler which rises automatically once you start hitting some silly speeds providing additional downforce or can be raised or lowered with the button on the dash as well. Overall the TT is a hot looking car and definitely stands its own against the likes of the Porsche Boxster, the BMW Z4 and the others.

As you drop yourself inside the TT, the interiors at first glance may not appear as luxurious as say an A6 or even the C-Class, however its only when you start looking at the details that you realise how brilliant the TT’s interiors are and how well they are made. The first thing you notice is the absence of a screen on the dashboard that you are so used to seeing in the Audi’s. While it’s just relocated, the dashboard certainly looks like its missing something, but that’s only till you get used to it.

The round air vents, a classic feature of the TT, incorporate all the controls for the air conditioning system. The newly developed lightweight sport seats are mounted low but keep you comfortable and firmly in place. Rear seats are there but strictly for emergency and short distances only. The luggage compartment will take in 305 to 712 litres of luggage.

The real party trick though is the instrument console. In the user interface concept, which is entirely focused on the driver, the Audi virtual cockpit replaces both the analog instrument cluster and the MMI monitor. The driver can toggle the 12.3-inch display between two different viewing modes. In the classic view, the speedometer and tachometer take center stage. In Infotainment mode, more space is given to aspects such as the navigation map.

The MMI operating terminal has been limited to six physical buttons. The top-of-the-range version also incorporates the MMI smart touchwheel – the round rotary touchpad in the top of the rotary pushbutton. The menu structure was inspired by a smartphone and includes an MMI search function. The voice control system understands a large number of everyday language items. We loved the audio system as well. The Bang & Olufsen Sound System utilizes a newly developed algorithm to reproduce audio signals with an even greater sense of space and precision.

Now we know the TT has the show and to give it the much required go it’s powered by a fantastic 2.0 TFSI engine coupled with the famed quattro system. The turbocharged unit pushes out an impressive 230 PS @ 6200 rpm and an even more impressive 370 Nm of torque between 1600-4300 rpm. While the horsepower figure might not seem too high for a sports coupe, it’s the torque that matters here.

Available from as low as 1600 rpm and coupled with that super quick 6-speed S tronic dual clutch transmission, the TT just shoots forward with the alacrity of a bullet fired from a gun. And it continues as it goes through the gears hitting silly speeds before you know it. The twin pipes emit a nice raspy note with the occasional over rev back fire making the aural experience even more amazing. Inside the cabin though, it’s typical Audi. It’s extremely refined and near silent under normal conditions.

Talking about numbers, the TT hit 100 km/h in 6.4 seconds flat and given the road will lock up at 250 km/h which makes it a seriously quick car. But the best part about the TT is its versatility.  When not giving the beans it drives brilliantly without an effort in the worst conditions possible and dishes out an overall figure of 8.8 kmpl. Be it bumper to bumper traffic or highway jaunts, the TT takes it all in its stride. Braking is just as strong as the acceleration. A load of electronics along with big 312 and 300 mm discs, the TT drops the anchors brutally. We had a situation with us accelerating hard and a truck coming out onto the road from nowhere without a warning. Standing on the brakes slowed the TT down without any drama at all.

When you decide to get yourself a sportscar, you usually throw things like good fuel economy, good ride quality, and comfort out of the window. With the TT, its not entirely out of the window. Lets talk about what its built for first, handling. The TT is set up for enthusiastic driving and the McPherson struts along with the four link suspension at the rear make sure the TT feels just right as you use that electromechanical steering which is a tad bit on the lighter side to dart yourself in and out of corners. Should you be too enthusiastic and manage to overdo things, the quattro and electronics make sure you’re on your path without any deviation.

The grip level are outstanding and the TT will leave you speechless and the co-passenger sick should you be in the mood and put the cars dynamics to test. It’s a sportscar and certainly behaves like one.

Ride quality though is a different ballgame. Now you certainly cannot expect the TT to glide over bad surfaces like your average Maruti, however you will be surprised how well the TT takes it. The bad sections do filter in thanks to the stiff set up and you will have to take it slow but still not as bad as most BMW’s with the infamous runflats. Ground clearance is not an issue over regular speed breakers but any abnormal once will scrape that expensive underside. In a nutshell, the TT can be used as a regular commuter in the city if the roads aren’t proper SUV territory.

It comes in flashy red, is low and in its current avatar looks like a proper sportscar. But those are just superficial reasons to buy the TT. The real reasons are far from these. The 2.0 litre engine offers sizzling performance and that space frame chassis along with quattro gives it phenomenal handling to match. It’s got some innovative insides as well and plenty of kit too. So if you already have your everyday car or SUV and need to spend some extra money for some extra sizzle on those weekends, the new Audi TT at Rs. 60.34 lakh is right up your alley.