While many might think that a convertible is not apt for India, manufacturers still provide the option of buying one. We take the latest drop-top from Audi for some fun in the sun. 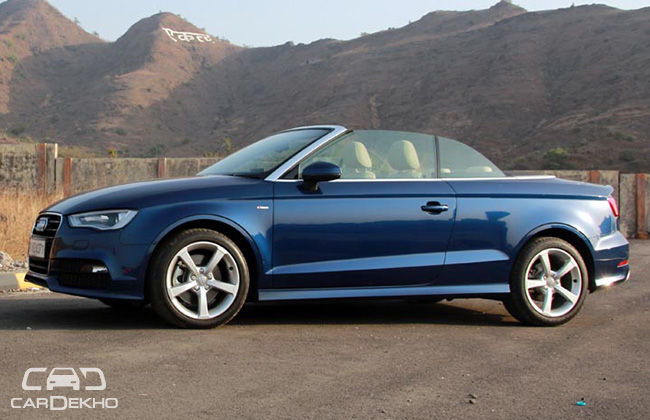 India is the last place where one would consider getting a convertible, and this non popularity is not without reason. Extreme heat, plenty of traffic causing pollution and dusty conditions mean an open top is pretty much a recipe for disaster...or is it?

If there’s one manufacturer who knows how to make subtle look good, its Audi. One look at the A3 and you know there is nothing overly dramatic about the car. It does not have the charm of say a Mini Cooper convertible, but still manages to turn almost the same amount of heads. Nice aggressive look at the front with those angry headlights and that typical Audi grille. This front bumpers have an aggressive touch too thanks to that front lip spoiler and the flared airdams.The side profile has a strong shoulder line running across with another strong crease between the front and the rear wheels which i must add look gorgeous, giving the little Audi a very muscular stance.

A nice touch is that the windscreen which is outlined silver, after which you either have a nice shapely canvas roof or nothing at all. Now the A3 looks fabulous with the roof down since it is a convertible, but as you can see in the images, its not much less of a head turner even with the roof on. Moving to the rear, the A3 looks just as smashing. The shoulder line extends to the rear forming an integrated spoiler with a fake diffuser and twin exhaust pipes completing the sport look.

Understated yet elegant is pretty much the best way to describe the A3’s interiors. Beige black combo on the dashboard looks nice and the steering wheel feels nice to hold too, however we wish Audi used a flat bottom wheel to enhance the sporty appeal. A nice touch just like in the Q3 as well, is the 5.8 inch electrically extending display screen which pops out right from the middle of the dash. The instrument panel in the Audi’s are some of the best offering brilliant reading legibility and at the same time looking cool as well.

A panel of buttons just below the fighter jet like vents control the Start/stop, Hazard, traction control and the sun blind function. The air con controls below are simple and the air-con itself functioned brilliantly even in peak heat. The seats hug you well, but we were surprised to find that all the seat controls were manual, even for the drivers seat. Now this is skimping by Audi considering what the car is priced at.

Being a 2+2, one might think that space at the rear is strictly for kids, but the A3 surprised us. While it might not offer as much space as a proper 4-door sedan, but considering its compact coupe dimensions, 2 average size people can be comfortable accommodated at the rear who get their own blower and a 12V socket and cup holders  as well. Ingress and egress at the rear is a little awkward since you have to push the front seats forward and squeeze in, but then its the same in any 2-door. Even the boot at 320 litres is quite acceptable.

The A3 also gets quite an impressive audio and communication package which includes the 9 speaker Audi sound system, Audi music Interface to connect the latest generation iPhone and iPod which is kind of a bummer for people who own an earlier version, Bluetooth connectivity and an exhaustive driver information system which gives out radio frequency/station or track title, telephone control menu and other display information from the infotainment system such as navigation(if fitted). Importantly it also includes a recommendation system which monitors steering movements and pedal usage and warns the driver when a rest might be required.

Powering the convertible is the same 1.8 litre TFSI petrol unit that power the hard top. No diesel option here. The 40 TFSI as its called it Audi speak pushes out 180 PS @ 6200 rpm and a max torque of 250 Nm @ 5000 rpm. Now that not might not sound like much, but Audi has made sure that every horsepower counts and the 7-speed S tronic gearbox makes sure that all the horses are harnessed well. Floor the throttle and the A3 takes off with a raspy note. It does feel “shove you in your seat” quick but at 9.1 seconds for the 0-100 km/h time and the 40-120 km/h roll on taking 12.9 seconds its fun enough. Using the lovely paddle shifters heighten the joy further and they are quite responsive with the upshifts and the downshifts.

Braking as expected was brilliant thanks to the barrage of electronics present. Standing on the brakes at 100 km/h the A3 took 36.3m and just 2.6 sec to come to a standstill. And need i mention, all this without any sort of drama whatsoever.

Fuel efficiency we recorded was 9 kmpl in the city and 14.1 kmpl on the highway which we feel is pretty decent for a car that will be bought for fun rather than economy. And these are decent figures I might add.

No quattro here and the A3 powers just the front wheels. Even so, the A3 is huge fun. Thanks to ASR(Anti Slip Regulation) and an Electronic Differential Lock, the Audi has plenty of traction no matter how you are driving it. Of course nearing its limits, the A3 does understeer like an front wheels drive would, but until that point it will have you grinning.

There isn’t too much roll and the A3 pretty much corners flat and those 225 section tyres make sure you head just where you point the steering.

Ride quality is slightly on the stiffer side but surprisingly compliant. The A3 takes most undulations comfortably and its only when the going gets really bad that the undulations filter into the cabin. Audi has managed to balance the ride and handling quite well in the A3.

Now there aren’t too many options when it comes to cabriolets in India. You have the Mini and you now have the A3 after which the convertibles start falling into a much higher price bracket. At Rs. 44.75 lakh ex-showroom Delhi, the A3 convertible battles it straight with the Mini Cooper in the entry level convertible segment. For the money you get a car that can function as a daily drive without any compromise, can ‘manage’ four occupants and drop the top when you feel like having a wind in your hair experience. Yes Audi has been a little skimpy when you consider that the car has no electric adjustments for the seat at this price but then this little Audi still offers much more fun for the money than you bargained for!