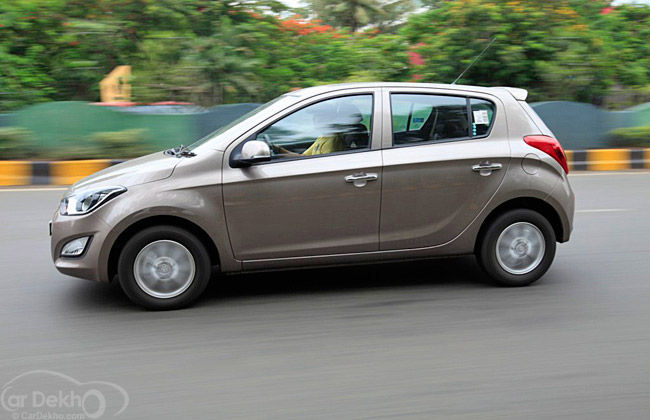 Basically designed and developed for the European markets, the i20 is produced at Hyundai Chennai’s plant and exported worldwide and has also tasted big success in the Indian market. The Hyundai i20 has been refreshed recently and we drive the latest version and  bring to you the road test of the 2012 Hyundai i20. Read on to know what has changed really on the bestselling large hatch from Hyundai.

The Hyundai i20 was always a trendy looking sleek car. Going with the current Fluidic design philosophy as with all Hyundai car line-up, the i-Gen i20 too gets the latest Fluidic Sculpture family look on it. The front of the i-Gen i20 gets an all new rounded face. A pair of new Verna like fluidic design headlamps replaces the older ones; these headlamps have a stretched back look on them.

The front bumper gets a bit more rounded and the centre grill gets leaner with an addition of round upper bumper extension that runs across over the grill. The fog lamps on the new i20 are boomerang shaped as opposed to the rounded ones on the outgoing i20.

The air dam gets smaller while the bumper gets meatier. The bonnet too gets fluidic treatment and now looks sleeker and in tune with the overall design. From the side profile, there is no change on the i-Gen i20 whatsoever and the good looks still remain the same.

The wing mirrors now get integrated turn lights on them making the sides look sportier. Chrome finish handles come in place of the body coloured handles on the i-Gen i20. Alloys are standard on the top end fully loaded Hyundai i-Gen i20 Asta that we tested. The rear profile gets a new set of tail lights that have a different design on the internal reflectors as compared to the outgoing i20.

The rear bumper on the i-Gen i20 gets a pair of reflectors and a touch of fluidic design on the lower section. The tail gate and the rear glass on the i-Gen i20 is untouched in comparison to the outgoing i20 and gets an all new large roof spoiler that makes the tail look sporty.

The i-Gen i20 looks a lot bigger than its outgoing version. The overall length has been increased by 55mm making the i-Gen i20 stand at 3995mm in length while the height and width remaining the same.

No doubt that fluidic touch on the Hyundai i-Gen i20 makes it look younger and much more appealing than the older one. The changes are not drastic yet they do their job convincingly in making the i-Gen i20 look much better.

The Hyundai i20s cabin was regarded as one of the most premium and best appointed cabins in the segment and with the i-Gen i20 Hyundai continues to excel in its interiors. The interiors remain the same but what is changed is the overall quality and fit-finish on the inside.

The major change includes the use of soft quality plastic on the dashboard and the inclusion of a push button start. The all new  instrument cluster gets an LCD display between the Speedo and the RPM dials. The two-tone dash in dark brown shade on the top and light beige on the lower half still impresses. The centre console gets an silver finish on it with a single zone climate control.

You get an single CD MP3-Radio unit with the usual AUX and USB connectivity on the dash. The leather wrapped steering has the audio control buttons laid on it. Bluetooth connectivity for telephone is a new added feature on the i-Gen i20. The i-Gen i20 gets the Verna like centre rear view mirror with reverse camera on it, this mirror is auto dimming too.

The i20 has one of the biggest glove box in the segment, in-fact the glove box on this car is bigger than a few sedans and the i-Gen i20 too retains this virtue. A laptop can easily be placed in the glove box. The 6-speed gear lever remains the same with a dash of chrome on it.

The shape and design of the seats too remain the same but they feel a bit cosier on the i-Gen i20. Hyundai has upped the quality of foam material used for the seats too. The driver seat gets height adjust and foldable arm rests as new added feature. The rear passenger seats get a pair of height adjustable head rests.

The rear seats are 40-60 split folding seats. The i20 is renowned for its roomy cabin that can easily seat 5 adult passengers. Headroom and leg room are more than adequate and the new foam seats are very comfortable. The Hyundai i-Gen i20 has one of the largest cabins and boot in the entire segment.

The cabin refinement is high with none of the engine or outside noise filtering inside. The engine revs smoothly at idle and on the move the power delivery is instant. The i-Gen i20 has a lot of low end power which comes handy for the in-city traffic drives. On the highways the i-Gen i20 is very sedate and the drive feels secure more like a sedan.

The suspension is re-done on the i-Gen i20 which makes the drive much better in comparison to the older i20. The steering feedback on the i-Gen i20 is on the lighter side but feels much better than the older i20. The overall drive feel is very light and easy that includes the steering and the clutch-brake pedals. Gear shifting through the 6-speed transmission is spot-on with zero wrong or hard shifts.

The gear ratios on the new i-Gen hatch are left unchanged as compared to the older i20. The Hyundai i-Gen i20 feels very stable at high speeds that we did in the speeds of 168kmph.

The Hyundai i20 already came with a long list of safety features and equipment level and the new i-Gen i20 takes it a notch or two higher. The i-Gen i20 Asta that we drove comes with unheard features for this segment.

The Hyundai i20 was a good trendy looking large hatch that sold in big numbers right from its launch. This timely Fluidic facelift on the i20 making it into the i-Gen i20 is a clever attempt from Hyundai to line-up all its cars in the Fluidic design structure and also making the i-Gen i20 much trendier and sleeker to look at.

The strong key virtues in its cabin and the technical part remain untouched, which is a good thing. The cars suspension is re-tuned for good and now handles and drives a lot better. Then there also is the never ending list of equipment and safety features many of which are the segments first.

The Hyundai i-Gen i20 now gets more appealing and tempting to own and is easily the better buys of the segment.