Published On Feb 17, 2012 By CarDekho for Honda City 4th Generation

Honda India has been garnering a lot of good response in the country for long and its biggest selling model is the executive-Honda City. The Honda City was primarily developed for the developing markets of Asia and South East Asia. India got the Honda City quite a few years back and recently Honda has given a major facelift to its biggest seller. Currently the sedan is in its third generation and it was sold in big numbers lately when it got stiff competition from the likes of the Hyundai Fluidic Verna, VW Vento and the Skoda Rapid. The Honda City has been an epitome of effortless driving character, refinement level and its reliability. Follow me as I take the latest Honda City Automatic for a spin to bring you a comprehensive road test.

Though the current Honda City shares its platform with its sibling-Jazz, the two don’t share any of the body panel or exterior design between them. 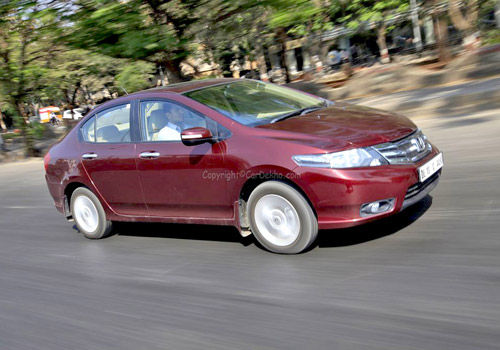 The current Honda City has much larger wheelbase (2550mm) as compared to the old Dolphin shaped City (2440mm) and as a result it boasts of larger exterior and interiors too.  The arrow design language continues on the 2012 Honda City with a few sporty additions to it.

The front end is largely signified with the sharp pouted nose that now gets an all new look. The front grill on the 2012 Honda City gets a three stage flattened chrome slit grill with a large Honda logo placed in the center.

This grill is in line with the flat stretched headlamps that have a small bulge on the sides. The other fresh touch to the 2012 Honda City’s front is an all new shaped front bumper with integrated fog lamps. The front bumper is now much sportier to view and has a black air dam that enhances the visual appeal.

The 2012 Honda City AT also gets fresh looking ten spoke alloy wheels that are mounted on 175/65 R15 Michelin tyres. The side profile gets an all chrome door handle with blacked out door frame and all new wing mirrors in duotone shades with integrated turn lights on them.

The Honda City has a high waistline that runs across the sides extending till the tail lights. The top end Honda City variant also gets the best in class electric sun/moon roof. The roof also has a neat little radio antenna in black.

The rear of the 2012 Honda City gets few new design touches as well. A pair of all new fresh looking tail lamps looks classy. The rear bumper is also an all new affair.

The bumper on the 2012 Honda City is extended and gets an all black lower section with integrated reflectors on them and a chrome tip silencer.

The Honda City has always been a very smart looking car and with these additions and enhancements, the City now gets sportier and much more premium looking car.

The 2012 Honda City also gets refreshed interiors; the cabin area is rejuvenated and receives a lot many neat touches. The dash is a dual tone affair with the top half in black and the lower half in light beige color shade. The instrument cluster is a three pod affair but now gets an all new looking cool blue backlight in the silver dials.

The speedo is calibrated to 220kmph while a multi function display is just below the speedo. You have the various telltale warning lights spread across the cluster which includes the Automatic shift indicator.

The sporty three spoke steering is leather wrapped and mounted with audio controls along with cruise control command buttons. The steering also has the paddle shift buttons placed behind it. The steering can be manually adjusted for height.

The center console gets a brushed aluminum garnish around the center console. There are chrome inserts on the AC control knobs and the AC vents. The 2012 Honda City gets the USB connection and FM Radio as was on the earlier City. The auto gear shifter is perfectly shaped to grip and falls easily in hand.

Storage space and can holders are placed just in front of the shifter. You also get a smart little center arm rest which doubles up as storage space between the front seats.

The 2012 Honda City Automatic we drove came with leather upholstery. The driver seat has height adjust while the seats are very comfortable and well designed. The chrome inserts continue on the door handles on the inside. There are bottle holders and pockets on the door pads.

The rear seats offer good comfort and are included with a foldable arm rest and head rests. You also get roof lights for the front and the rear cabin. The quality of the plastics used in the cabin is good and seem to last a long time. There’s a lot of storage bins and corners spread across the cabin which is very practical.

The audio quality playing from the USB/AUX is of fine quality and connecting my iPhone was a breeze. A CD/MP3 player is missing but we are not complaining. The cabin on the Honda City is very spacious and offers superb visibility from the driver’s seat. Overall the cabin on the 2012 Honda City is a vast improvement with new neat touches being got in along with high comfort level and practicality.

The 2012 Honda City is powered by the renowned i-Vtec 1.5liter 4cylinder Petrol engine. This 1497cc 16valve engine makes 118PS of power @ 6600rpm and has 146Nm of torque @ 4800 RPM under its belt. The 1.5liter i-Vtec engine is mated to a 5 speed Automatic gearbox. The gear shifts can be also manually shifted using the paddle shifters.

Honda engines are one of the best refined and super smooth ones and the Honda City inherits this. The i-Vtec motor is a gem and super silent at idle. Many a times you may be fooled to crank the engine even when it’s running due to its high refinement and low audible levels. The drive on the 2012 Honda City is unmatched; if you are a speed freak then this is the perfect car for you.

The i-Vtec engine has loads of power and the auto gear box works harmoniously to shift at the perfect RPM and throttle input. For the ones who desire more pleasure we advise you to use the paddle shifters. Shifting gears using the paddle is super fun. You can literally milk the engine of its true capability and run through the complete power band when shifting on paddle.

Handling is also vastly improved on the 2012 Honda City. The India spec suspension setup works marvelously on bad and bumpy roads and works very well on plan tarmac too.  The Honda City is very agile and loves being thrown in corners and bends. The steering feedback is light just correct to go with the instant throttle response.

The Honda City AT did a dash to 100kmph in 11seconds which is fast by its segment standards.  The all wheel disc brake setup works sharply and instantly stings the car to halt when asked to. The Auto gear box works seamlessly and there is no shift lag experienced. The drive quality and performance on the 2012 Honda City is unmatched and highly refined. We got an overall fuel economy of 12 kmpl on combined driving conditions that included a lot of city driving.

The Honda City was the clear winner and the segment leader in its segment until recently but now with this refresh Honda has just got the right ingredients to regain its title. The Honda City has the best petrol engine in the segment, it has got roomy and comfortable interiors, is very appealing to view on the outside as well. With so many things going in the Honda City’s favor there isn’t much that can go wrong for it. And did we mention the new attractive prices for the Honda City which start at Rs. 6.99 lakhs for the Corporate variant and go up to Rs. 10.22 lakh for the V Automatic Sunroof Variant that we tested.

Last words- Yes, Honda makes the best Petrol cars in the segment and if you are looking for a sweet looking, practical, refined midsized petrol car then 2012 Honda City is just perfect.