At Skoda, it's apparent that there are no rigid rules being enforced on the designers, no narrow perfectly defined pathways along which they must march. And this can be seen with the Yeti, which is brimming over with individuality and "look at me appeal". The moment you see the car in the flesh, you will stop questioning and start appreciating the looks. The manner in which the round headlights bulge out and overlap so many surfaces, that very attractive angry SUV underbite of the scruff plate, the way the squared-off wheel arches deliver a well-planted stance, and even the arc of the window line that curves upto the roof. And the Yeti looks attractive from the rear as well. Skoda has given this car a length of just 4.2 metres. As a result, squeezing into tight parking spaces is no sweat at all. Visibility from the driver's seat is excellent, the parking sensors do a stellar job and there's plenty of articulation in the front wheels too. For rear passenger space, Skoda has taken a leaf from tall boy hatchbacks and has used vertical space to very good effect. Using the adjustable seating, you can slide the rear seats back and fit one six-footer comfortably behind another. The front seats are as large and comfortable you?d expect of any Skoda, door-shut and build quality are tank-like and there are plenty of high-quality bits on the dash. The steering wheel and dials look similar to those on the Laura, the central console is traditional and there is a neat horizontal line of separation between the upper and lower dash. As on the Laura, a few low-rent plastics do exist but thankfully not enough to spoil the cabin's ambience. At the rear, there's plenty of thigh support, you sit higher than the front seat passengers and the backrests of the seats recline as well. All three rear seats can be removed individually for variable luggage space and flexibility, and you can even uniquely place the two rear seats directly behind the front seats by taking out the centre seat. Luggage space, however, is pretty generous at 415 litres under the parcel tray. And there are all sorts of nets, hooks and very cleverly engineered extras that make this a very user-friendly boot. The Yeti is built on the same platfrom as the Skoda Laura (code PQ35), and that for a start means it has a highly sophisticated all-independent suspension. The SUV, however, uses a full-time four-wheel-drive system. Under normal conditions, it all but functions like a front-wheel-drive car. Up to 95 percent of its power is sent to the front wheels, with more power only sent to the rear wheels if any slip is detected. Upto 90 percent of power can be sent to the rear wheels if the need arises, and it has a limited slip differential as well, something that is very handy in our slushy conditions. The Yeti is surprisingly capable off tarmac, taking to slushy parts and rough roads with a surprising amount of confidence. The Haldex four-wheel-drive unit has been placed in the rear for better weight distribution and grip levels at front and rear are well balanced too. The Yeti's agility on tarmac is equally impressive. The electric steering is direct and very accurate and this makes the Yeti enjoyable on the highway too. The downside of the taut suspension, however, is a slightly revealing ride. The Yeti isn't as supple as something like a CR-V in town and this is especially true over short, sharp intrusions. The two-litre common-rail diesel and the six-speed manual gearbox are well up to the task in the city. This new-generation 140bhp motor is the same as the one that powers the Laura and that gives it a very impressive turn of foot. There is only the slightest hint of lag from this motor, after which you are smoothly and briskly whooshed up to much higher speeds with a very pleasant slug of torque that stretches well into the midrange. 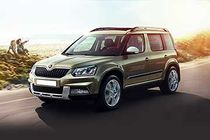