New mahindra scorpio has very attractive aerodynamics and great sporty look. Its high ground clearance makes go anywhere on off-roads , very suitable places like in villages where roads are not proper , Scorpio's new Cushion Suspension Technology and Anti-Roll Technology make you feel very comfortable as compared to its previous version. Some problems occurred in its fuel hose but company recalled that model. Its new version is changed in looking and it feels some compactness mean interior space is low as compared to its previous version but its new model is available in both 6-speed automatic and manual transmission which also attract the customer because previous version of scorpio lack this features and other SUV's with feature are costly than scorpio. new version is available in various segments according to customers requirement. new version has first in SUV mild hybrid technology which reduces fuel consumption by up to 7% .It has voice messaging feature and fully automatic temperature control system which makes it very cool. Control of new scorpio is comparatively better at high speed than previous version, which had problem of rolling at high speed, for this some modifications are also done in new version . In case of a frontal collision, the steering column collapses to minimise injury to the driver.

4.6/5
Based on1279 User reviews
Write Your Review
Scorpio Reviews 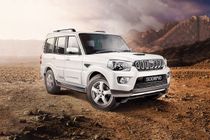