The Lamborghini Aventador is a sports car and it is all wheel drive car. The car was named after a fighting bull as tradition of Lamborghini. The Lamborghini Aventador is a mid-engined sports car produced by the Italian manufacturer Lamborghini.Launched on 28 February 2011 at the Geneva Motor Show, five months after its initial unveiling in Sant'Agata Bolognese, the vehicle, internally codenamed LB834, was designed to replace the then-decade-old "Murcilago" as the new flagship model The Aventador is a beast. Simply drive the car and you will get to know why I called it a beast. The car looks stunning while it is on the road. The car has a V12 Cylinder engine which gives it the massive power. Aventador's engine is 6498cc, which gives 690.63bhp of power at 8250rpm and 690Nm of torque. The top speed of Aventador is 350kmph. Lamborghini claims again that it can reach 97 km/h (60 mph) in less than 3 seconds and a top speed of more than 350 km/h (217 mph). The Aventador's engine is Lamborghini's fourth in-house engine and second V12 design. It is the first all-new V12 since the 3.5 litre powerplant found in the 350GT. The aventador can attain a speed of 370kmph as measured by Sports Auto Magazine.Its transmission, a single-clutch seven-speed semi-automatic, is built by Graziano Trasmission Despite being single-clutch, gear-shifts are accomplished in 50 milliseconds.The new, electronically controlled, all-wheel drive system is developed and supplied by the Swedish company Haldex Traction, offering traction and handling capabilities based on their 4th generation technology. There are two models of Aventador i.e. Aventador LP 700-4 and Aventador LP 700-4 Roadster. The 2013 Aventador LP 700-4 Roadster was announced for production on 27 December 2012, equipped with the same V12 engine as the coup-version, Lamborghini claims again that it can reach 97 km/h (60 mph) in less than 3 seconds and a top speed of more than 350 km/h (217 mph).The removable roof consists of two carbon fiber panels, weighing 6 kg (13 lb) each, which required the reinforcement of the rear pillar to compensate for the loss of structural integrity as well as to accommodate the rollover protection and ventilation systems for the engine. The panels are of easy removal and are stored in the front luggage compartment. The Aventador Roadster has a unique engine cover design and an attachable wind deflector to improve cabin airflow at high speed as well as a gloss black finish in the A-pillars, windshield header, roof panels, and rear window area. The car has a US$441,600 base price. With a total weight of 1,625 kg (3,583 lb) it's only 50 kg (110 lb) heavier than the coup,(the weight of the roof, plus additional stiffening in the sills and A-pillars) There are special editions of Aventador also launched by the Lamborghini: Aventador J Dreamliner Edition (2012) Aventador LP 720-4 50,Anniversario (2013) Aventador airport vehicle (2013) Aventador Pirelli Edition (2014) Aventador LP 750-4 SuperVeloce (2015) Aventador LP 750-4 SuperVeloce Roadster (2016) Aventador is one of the best car in my opinion.I am die hard fan of Lamborghini. Aventador is the one of the best cars Lamborghini has ever manufactured.

4.7/5
Based on33 User reviews
Write Your Review
Aventador Reviews 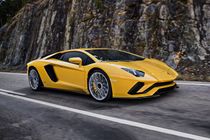