The X5 was built to be Merc's sportiest SUV and has been fairly popular in the Indian market. But the third generation X5 is certainly a refined package. The moment BMW took the wraps off the new X5 M Sport, I made up my mind to get one for me. Though I desired for a petrol version, but finally settled out with the diesel one. I was quite delighted to see how so many things have been changed for some good. The front poses the same signature kidney grille while I found muscular lines and sharp creases all over the body giving it a sporty appearance. The cabin exudes only luxury with the dashboard being the most user-friendly and within the reach of the driver, something that was missing in the previous X5. The new iDrive infotainment, largest sunroof and a massive boot space are all that you need for your long weekend drive. The 255bhp engine was already a hit but the new 8-speed automatic was rewarding that drags this 2.3-tonne SUV from 0-100kmph in just 7 seconds. I have always loved the way BMW delivers quality to its cars and the new X5 M Sport proves that it still has the guts to knockout contenders such as Audi Q7. 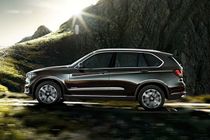