Aston Martin calls the Vanquish a super grand touring machine, not a super sports car; we say its so beautiful, we dont care what Aston calls it. Yes, its sonorous, 568-hp V-12 makes it fast, but many sports cars easily out-accelerate it. It?s also sumptuous inside, if ergonomically challenged. Like to drive topless Opt for the Vanquish Volante, for a truly rare ride. As with all Astons, its little flaws are all but forgivable, since it is one of the most lovely things on four wheels. As always, the Vanquish is happiest when asked to digest a serious journey at a high average speed. The cabin lacks the toys and gadgetry of the competition. Theres no touch-sensitive screen, and navigational duties are still handled by a garish display that climbs from the top of the dashboard seemingly straight from 2005. But once you have it connected to your music device the audio system sounds great and the seats stay comfortable for long enough that cruising stints are likely to be limited either by your bladder or by the relative smallness of the Vanquishs 20.6-gallon fuel tank against its thirst for gas. The cars natural cruising speed is probably about 120 mph, at which point the cabin is still quiet enough for conversation in normal tones. The Vanquish remains a glorious thing, even if it feels as if it has been out-evolved by the rest of the pack. And yet it has as much character as any of its more-modern competitorsand more than most of them. As much as were looking forward to Astons brave new era, the company should never lose sight of how to make cars like this. Aston has enhanced its muscles and haunches, provided it with a rear-end shape that excuses the need for a spoiler and given it a set of aerodynamic carbonfibre blades. The new tailpipes are beautiful, and so are the carbonfibre side sill extensions. The typically Aston Martin side vents ahead of the front doors are rethought and beautifully expressed. But the turret and window shapes tell you that this is still fundamentally a DB9. When you approach it to drive, the Vanquish is the most welcoming of cars. The butterfly doors open not just outwards but also upwards, away from any kerb. Theyre long but not particularly heavy and will remain open at any angle, aiding access. The 5.9-liter V-12 engine cranks out 568 horsepower and 465 pound-feet of torque to rocket the coupe to 60 mph in just 3.6 seconds; the Volante hits the mark in 3.8 seconds. Max speeds top out at 201 mph for the coupe and 197 mph for the Volante. Gas mileage, predictably, is not great, with ratings of 13 mpg city and 19 mpg highway. Last year Aston Martin added a ZF-sourced Touchtronic III 8-speed automatic transmission, which really makes the most of the V-12's power. It feels very lively during sporty driving, smooth around town, and always pleasant and engaging to operate, whether you?re driving in automatic mode or using the paddle shifters. If you choose to use the paddle shifters, some cool features enhance sporty driving. Multi-ratio downshifts are possible merely by holding the downshift paddle, allowing the car to select the lowest possible gear during braking. The car will also adapt its shift points to the drivers style through the Adaptive Drive Recognition system. However, the transmission programming is never high-strung like it is in rivals with dual-clutch transmissions and Sport Plus modes. To get the most out of the power, it is necessary to use the steering wheel shift paddles. From behind the wheel, its impossible to forget the car?s width and mass. It's also impossible not to wear a face-splitting grin. Raucous sounds, incredible thrust, potent grip all are available in spades. The steering feel isnt as tuned-in as a pure sports car, which takes some confidence out of the driver, but the mellower feel is welcome on longer highway drives. As for the curb weight, the Vanquish tips the scales at a tick over 3,900 pounds, despite the carbon fiber body. The weight is noticeable in corners, but it?s never a burden thanks to that brilliant V-12 under the hood and carbon ceramic brakes at all four corners. 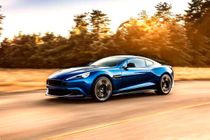