Toyota had recently updated one of the best-selling vehicles, the Innova. The Innova had received its first facelift in 2009, after its launch in 2005. The changes on the Innova aren’t major and are only cosmetic. CarDekho takes the Innova for a quick spin, to find out what all changes have been made in the Innova. To find out, read out review. 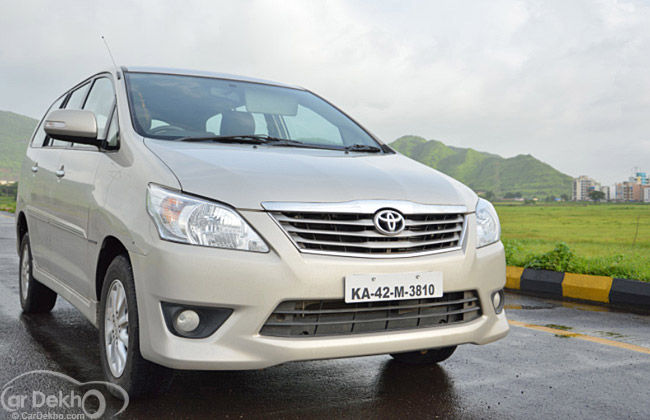 The exterior styling of the titivated version of the Innova hasn’t changed much. The facelift version gets a new front chrome grille and a revision in its headlamp design.

The headlamps are now sleek and meld well with the new front grille. Minor changes have been made on the bumper and the Innova now looks sportier than before.

Toyota hasn’t made any changes to the silhouette of the Innova and it remains untouched. The design has been a success and hence not many changes are implemented. There is no hate or love factor, and many like it. The rear has received some minor upgrades. The tail gate gets a large chrome plate, with Innova embossed on it. Even the tail lamps get a bit of tweak in its design. Overall, the Innova received some minor upgrades to refresh its ageing styling.

Innova being a successful product, not many changes have been made on the inside either. Same styling has been retained and the fit and finish is still first-rate. The quality and the feel of the materials are decent. The instrument panel design is simple and elusive. It feels a bit aged, when compared to the interiors of some of its competition, but it is one of the most easy to use.

The range topping Innova now has a touchscreen infotainment system. This in-dash system has auxiliary and USB connectivity, reverse parking camera and also telephonic and music Bluetooth connectivity. We loved the quality of the music that floated in the cabin through its speakers. Even the instrument binnacle has been refreshed. The rest of the kit remains identical.

The seating is still the same, with ample space for the front and middle row passenger. The second-row seats do not have sufficient support for thighs.  The third row of seats is meant for children, as there isn’t much legroom. In the top of the line, the Innova gets roof-mounted air-conditioning vents for the second and third row occupants.

Innova is propelled by a 2.5-litre diesel engine that powers the rear wheels through a 5-speed manual transmission. This engine produces 100bhp and 200Nm. The Innova comes with Bharat Stage IV and Bharat Stage III norms engines. The Bharat Stage IV norm oil burner gets an intercooler, however the BS III goes missing on the same. The engine is noisy, especially on cold starting and is also loud even at engine speeds.

The drivability of the Innova is astounding.  It has a strong low and mid-range. This means it will pull cleanly even when lugged into a higher cog without any hiccups. Overtaking isn’t an issue in the Innova and driving it is a breeze further in city or out on the open road. The Innova comes mated to a 5-speed manual transmission. The gear stick is long and shifts are wee bit notchy. But the gearing is just spot-on for city and highway driving.

Innova is a multi-utility vehicle and has been made for superior the ride quality, as compared to the handling characteristics. The ride of Innova is supple and composed. The suspension of the MUV irons out most of the jolts on uneven road surfaces as well.  The dampers absorb most of the shocks keeping the ride smooth.

The handling of the Innova is decent for its size. Considering the length of the vehicle, the body roll isn’t much. One might not lose control, unless you do something that is stupid. The steering wheel is also light and it weighs gradually with the increase in speed.

The Innova with its brilliant drivability, composed ride and spacious interiors is of the best multi-utility vehicles in its segment. Toyota’s bullet-proof reliability and servicing further makes the Innova a great product.

So, the Toyota Innova is an excellent product with a low depreciation value something made for the wiseacres, however the pricing of the top-of-the-line of the Innova is a bit steep.