We drive the new SUV/MPV from Tata to see if it really can kill the Toyota Innova.

According to some rumors the new Tata Aria received some final touches and re-engineering at Jaguar, a rumor that Tata Motors cleanly refuses to accept. The reason for this rumor to start in the first place is the superb exteriors and engineering that’s on the Aria.

I drive the Tata Aria Pride to bring you the real story on how good this new SUV/Crossover/MPV from Tata really is.

Tata Motors has something called as the Indica prototype which it showcased at the Geneva in 2006, from the Indica that was shown to the final production ready vehicle the Tata Aria Pride has truly come a long way. It’s a huge MUV/SUV when you see it at first sight. It has the ‘Don’t Mess with Me’ aggressive front end. This into your face of the Aria houses the wrap round headlamps with integrated turn indicators and very welcome projector headlamps. Tata calls these headlamps as Dual Barrel Headlamps. The front has an all new Tata grill with a very corporate looking chrome strips and the very familiar Tata logo on it. A large wrap round bumper houses the round fog lamps, this bumper has the air dams which are in black that makes the bumper a two tone thing. 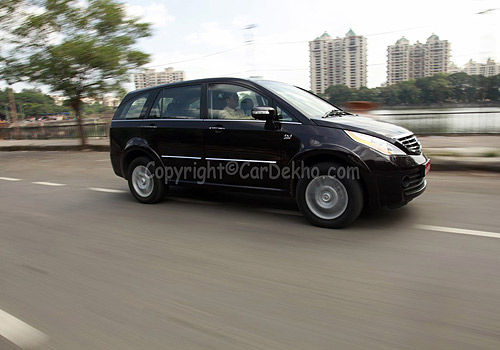 The bonnet to me resembles something like the Volkswagen Beetles round bonnet and I must again add here that the front of the Tata Aria Pride is huge and aggressive perfectly suiting the vehicle and giving it a good road presence. The sides of the Aria have the muscularly shaped body panels with a lot of glass area on. Side of the Aria has a very striking design especially the 3rd row fixed glass that has the perfect curve very much like that on the CRV. Lot of chrome detailing on the door frame and also on the door molding add the classy touch to the sides.

The wheel arches have the muscular looking fibre panels that make the Tata Aria Pride look much broader. The tyres are a meaty lot, 235/65 R17 with a very fresh looking 5 spoke alloys which again help in making the Aria look broad. The wing mirrors are the best in the segment and are also electrically adjustable and foldable with integrated turn lights on them. The rear of the Aria isn’t as exciting as the sides and the front. Here things are more flat and the family Tata tail lamps are here but in a much larger dimension. The rear bumper is also very flat with reflectors integrated in them.

Things look much better thanks to the twin silencers which are in chrome and a chrome strip that runs across the boot lid just above the number plate making the rear more exciting. A thought that came to my mind after a while was the Aria also resembles the recently launched Mercedes R Class, which is also a very good looking crossover. Proportions on the Aria are all XXL, 4780mm in length, 1780mm in height and 1895mm width to be precise. The ground clearance as expected from a SUV/MPV is also perfect at 200mm.

Rear defogger and wash wipe are standard. Fit and finish on the outside are very up market and while the Tata Aria Pride was with me, I noticed many people stopping by just to see and admire the vehicle. I had to point out at the Tata logo to make them realize that this is the latest SUV/MPV from Tata. So a very nice job on the outside especially the paint job, a big thumbs up for that.

Get in to the Tata Aria Pride, well getting in isn’t that difficult, well having a foot board would have made things easier. A dual-tone cabin welcomes you, a mix of maroon, brown with brushed aluminum inserts is what the cabin is colored of. The instrument cluster is a rather simple affair; dials in a mix of silver, white with red needles on them do their job to the core. A 4 spoke flat type steering wheel is large in size but suits the large proportions on this vehicle.

This steering can be adjusted for height but not for reach. On steering control buttons for cruise control, audio/music and Bluetooth voice commands with a huge Tata logo on the centre. The steering would have looked better if it had a touch of chrome or a dash of aluminum on it. The centre console houses the LCD screen for the satellite navigation Bluetooth telephony and MP3/radio controls. Below the screen is the main control station with buttons to access the various menus and settings for GPS as well as music and telephony.

The electronic shift button to the 4x2 wheel drive is below the control station and the climate control panel Is placed below this. Being an MPV/SUV the Tata Aria Pride has lots of storage bins, pockets and can/bottle holders spread across the cabin area. Note worth is the twin glove box of which the top most being internally cooled and lighted and having a nice auto closing door to it. The lower glove box is the normal type. The AC vents are rectangular type on which flow on for the individual vents can be shut when not needed. AUX and USB port is available and more than welcome.

The gear shifter is very different to other Tata vehicles in shape and has a nice feel when gripped. Moving to the seats, the Tata Aria Pride has perforated type leather upholstery in maroon mixed with black shade. Driver’s seat has the manual adjust including height. Front seats are nicely shaped and offer good support to the under thigh and lower back. Cushioning is hard but that’s what is also recommended by the Orthopedic, isn’t it? Individual foldable arm rests for both the front seats offer good support and convenience during long drives.

The middle row seats are very comfortable; the back rest of this row of seat can be adjusted at 3 different angles to suit your comfort level. They got head rests, folding arm rest and are of 40-60 split folding types. This row seats can also be pushed forward or back to suit your posture and leg room. The third row seats are basically meant for only two passengers and are of 50-50 split types, here the leg room is lesser, never the less this is the seat which is most preferred by kids.

Let me mention about the AC vents, 4 vents for the centre row (2 in the centre and 2 on the door pillars) and 2 for the 3rd row passengers. Both the centre row and the 3rd row seats can be folded fully extending the boot area on the Tata Aria Pride. Look up and you see not one nor two but 7 foldable storage bins that are placed across the roof line from the 1st row to the 3rd row. So many bins were not needed; 2-3 would have been more than enough I feel.

Overall the Tata Aria Pride has a good plush cabin with all the needed goodies loaded in.  Leg room, head room and shoulder room is abundant and the feel is very cozy once in the cabin. I loved the perforated Burgundy leather seats, they reminded me very much of the Land Rover seats.

The Tata Aria Pride uses the acclaimed DICOR 2.2ltr CRDI engine. This is a very capable unit that has 140PS of power on tap generating a massive 320NM of torque in transition. This is a 32bit 16valve engine that uses Variable Turbine Technology or VTT as Tata calls it. A brand new 5 speed gearbox that’s code named MKII is mated to this unit. The Tata Aria Pride also boasts of Dual Mass Flywheel that according to Tata Motors helps in minimizing vibrations and thus helping in the NHV levels in the cabin. The Aria also  boasts of an all wheel drive called as the Adapterra 4X4. The suspension setup is taken care by the independent double wishbone at the front and a 5link suspension at the rear.

Fire the engine and you notice the improved NHV levels that Tata has managed to get into the Tata Aria Pride, the engine noise not heard at idle nor are any vibrations felt. Engage the 1st gear and this huge vehicle moves ahead instantly. The power delivery is quick and linear. What is also improved here is the absence of the engine whine that was heard on other Tata SUVs while accelerating. Remember this is the same DICOR unit that also chugs the Safari too but there is a drastic difference in the way the engine behaves and feels in both the vehicles. Due credit also has to be given to the all new gearbox on the Aria. The Tata Aria Pride surges ahead seamlessly in a very polished manner and quickly. Pick up is good with perfectly matched gear ratios that are tuned for quick acceleration.

The overall ride quality is very impressive. The suspension setup on the Tata Aria Pride can handle the potholes and bumpy roads rather well. The ride quality is very good and the suspension is tuned on the softer side to enable it to soak up the bumps. The steering feels a bit heavy, but the feedback is good. There is a bit of body roll due to the XXL proportions but when you are driving in the 4X4 mode the body roll is at the least. If you are driving mostly on the tarmac then the 4x2 mode is for you which disengages the front axle and also enhances fuel efficiency. Turning and cornering in the Tata Aria Pride is inspiring and so is the parking thanks to the reverse camera that helps you perfectly park this beast. The all wheel disc brakes boosted by ABS with EBD and ESP make the braking on the Aria very reassuring.

The Tata Aria Pride running on the 2.2 Dicor engine and having to move nearly 2.8tons does a fairly good job of returning with figures of close to 9.5km to a litre of diesel.

Fit and finish is hugely improved over earlier Tata products and the 2.2 DICOR engine now feels a lot different. The Tata Aria prices start at Rs 12.91 lakh for the base version and end at Rs 15.5lakh for the fully-loaded variant that you see in this review.