Published On Nov 18, 2020 By CarDekho for Renault Triber

The Renault Triber AMT joins our long-term fleet and it has an uphill task at hand - to impress a purist biker in the team. 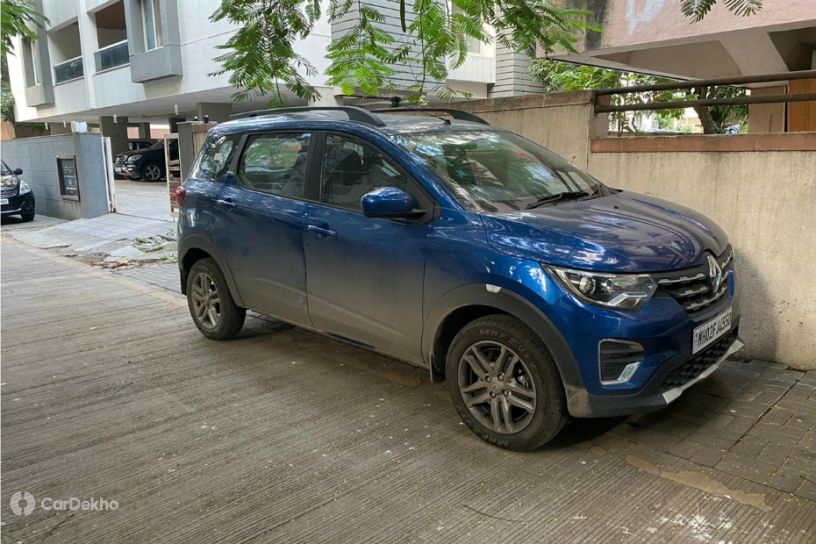 The last few months have been nothing short of crazy. Frequent lockdowns, an extremely extended work-from-home situation and on a personal note, a recently developed medical condition that has kept me off motorcycles and in and out of hospitals -- all of this has really changed my perspective on automobiles. Never before had I felt such a pinch of not having a car at home. So you can imagine, getting to keep the Renault Triber AMT as a long-term test vehicle was a real shot in the arm.

I had always pictured the Triber as a small car, and at sub-4 metres in length, it is. But that wasn’t the impression I got when I tried to park it in my parking spot for the first time. Now that could be because it’s a pretty small space, but the feeling that the Triber is a slightly portly gal still hasn’t gone away after driving it for a couple of months, whether I’m parking it or in the middle of traffic. Those who want to actually use all seven seats might appreciate the Triber’s chunky proportions, but it’s just my better half and me in the car most of the time. So then we’d be happy with the extra boot space that the removal of the third row opens up, right?

Well, no! That requires the complete removal of the seats and storing them elsewhere, and our small flat has no space for a pair of car seats (or so I’ve been told). So the third row seats stay in the car, folded up. But the problem with that is the legs of the seats stick up and get in the way of large items you might want to stow in there -- something that was a sticking point when transporting an office chair and a bunch of other furniture to my parent’s place.

If it’s going to be just five people in the car, the Triber is superb! I really like the fact that the second row has plenty of space, reclinable backs, and AC vents for the back in the B-pillars. However, if you have the rear blowers on any setting above ‘1’, the constant whooshing sound can be quite irritating for the driver. The front is spacious too, although the driver’s seat can sometimes feel slightly small for my XXL-sized behind.

What I really appreciate is all the cubbies -- each door pocket can hold a couple of bottles and the centre console has two cup holders which can hold a large bottle of hand sanitizer. There’s a cooled box behind the cup holders which can accommodate a moderate 1-litre water bottle, and not only is there a large centre cubby (which I’ve been using to store extra masks), but also a tray above the start button which can easily hold a phone. Oh, and even with two front airbags, there are TWO glove boxes on the passenger side.

Space is something the Triber has well covered but the driving experience falls a little short. You won’t really mind (or even notice) the 1.0-litre engine’s paltry output figures when you’re driving around in the city. Even the AMT works great in traffic and feels much better tuned than the one in the Kwid. Most of my driving for the past two months has been on roads which have gotten back to their chockablock standards post-lockdown. As long as you’re easy with the gas pedal, shifts are smooth and unnoticeable. This easy going nature is something I’ve really come to appreciate.

The few times I’ve taken it down the highway though, the motor has felt rather weedy. Anything above 80-90kmph felt like a bit of a struggle. If you put your foot down for a quick overtake, the gearbox is ridiculously slow to kick down too. And the moment you get the motor revving above 3,000rpm, the engine just starts screaming away.

The small engine combined with the slow AMT ‘box means this Triber isn’t too efficient either. I’ve been getting about 10.5kmpl over the last few fill-ups, which I guess is down to the fact that a major chunk of my driving is through heavy traffic.

One thing that somewhat annoys me about the Triber is the placement of the pedals. Normally, in an automatic (or AMT), the brake pedal is larger than on the manual. But in order to keep costs down, Renault seems to have retained the accelerator and brake pedals from the manual. Not only does the brake pedal feel a little small for single foot operation, but it’s also a little too close to the accelerator. And with my size 11 feet, quickly transitioning from one pedal to the other can be a little odd.

On the other hand, I have come to love the keyless entry -- it’s almost at the level of some luxury cars. Just walk up to the car with the flat key in your pocket and the doors unlock when you reach them. Park the car and start walking away with the key, and the doors lock automatically. It’s a great handsfree feature that works as advertised every single time and makes me wonder why all cars don’t have it.

I sometimes think I’m too critical about this Triber. For city duties, it’s a great companion and one that I’ve actually come to like thanks to its space, practicality, and the convenience of the AMT. As for highway use, I’ve not really had a chance to stretch the Triber’s legs much. So that’s something I’m looking forward to and a detailed breakdown of how it performs there is something you can look forward to in our next long-term report.

Brilliant Suv in the segment, Really like the style and comfort.

Brilliant Suv in the segment, Really like the style and comfort.