Nissan has knack of doing things and this time, the Japanese automotive manufacturer has done something similar as it now prepared itself to introduce the Evalia into the Indian market. 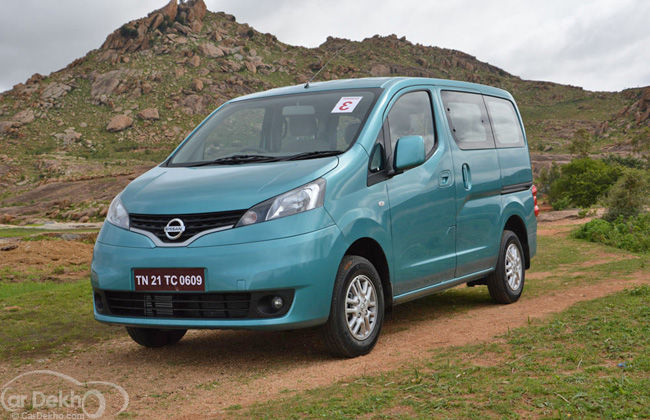 The company showcased Evalia/NV200 at the Auto Expo earlier this year. This will be first MUV in its segment to have sliding doors— though Nissan calls it Urban Class Utility Vehicle— buyers are likely to compare to the other MUVs.

With the launch being aligned in September, Nissan invited us get the initial impressions of the vehicle. So, we review the new Evalia, a month before its launch.

Overall design of the Evalia might not impress you, but it does carry a hint of premium-ness in its styling. Nissan has moulded a sleek fascia that does meld well with the rest of the boxy design. The front does look good and the rear screams out loud about its practicality.

The sliding door means that Evalia doesn’t need loads of space to open its rear doors.  Evalia does look very urbane despite its simple styling cues. The windows for the second row aren’t sliding or plug-in types. These open minimal for cross ventilation.

Step on the inside of the Evalia, and you will be ravished by the beige interior trim. The Indian version of the Evalia gets beige colour instead of black, to give it a more premium feel. The overall plastic quality and the fit and finish is decent.

The small steering wheel and short gear knob make it easy and convenient to drive. There is plenty of space for your stowage for your 500ml bottles. For some reason, the glovebox on the Evalia doesn’t have a lid.

The interior space is one of the biggest USP of the Evalia. The interiors are spacious and there is enough room in the first two rows. There is ample of space for your head and knees.

The support for thigh isn’t sufficient in the second row. However, the third row is a tad tight on knee room, especially if you are a six-footer.  Even the boot can swallow good amount of luggage without flipping down the third row of seats.

The low floor makes easy loading and ingress-egress for the aged. Also, when the seats are flipped, it forms a flat-bed.

Nissan has plonked in a 1.5-litre diesel engine in the Evalia. This is the K9K that also propels the Sunny. This oil burner is one of the most fuel-efficient and highly refined mills from Renault. The noise, vibration and harshness (NVH) levels are fairly low. Crank the engine, and you will be astonished by its finesse.

The initial thought is that the engine seems to be underpowered. But all these are changed, once you get behind the steering wheel. The power delivery is linear and the engine pulls cleanly even from low revs. There is no struggle or hesitation from the engine, even when lugged into a higher cog. We drove uphill on Nandi hills, on the highway and in the city and we had no complains with the drivability.  Another biggest USP of the Evalia is its gearbox. The gear knob on its competition is tall and has loads of vibration. Nissan has used a small knob, which makes shifts positive and the throws short. This is a five-speed simple shift stick that is easy to change.

Evalia is the only front-wheel drive vehicle— when compared to its competition— and the others are rear-wheel. The Evalia is also the only one in its category to get single leaf spring suspension at its rear. Nissan classifies the Evalia as the “Urban Class Utility Vehicle” hence the ride on the Evalia has be smooth and composed, and it is. The ride suppleness is good as the suspension soaks up all the jolts and rides with well-damped compliance.

All due credit to the engineers in Nissan, who tweaked the suspension well to have minimal body roll despite the mammoth size. It can be pushed around bends and the vehicle will adhere to the road. On excess pushing, Evalia can lose grip and go out of control. Being a large vehicle, it isn’t built for such purposes. The steering wheel is light and feels connected when manoeuvring through turns.

At speeds in excess of 100kmph, the crosswinds affect the car and the force can be felt. Something similar can be felt, while overtaking trailers on the highway.

Nissan has planned a good product for the Indian car market, with the necessary bells and whistles that the target audience will require.  It has sufficient space, frugal diesel engine, easy drivability and manoeuvrability, this what is vital for a buyer. This is the first production model vehicle in India, where the sliding doors look premium, so things do look positive for Nissan.

Now, the pricing will be the final deciding factor. We assume the pricing to be between Rs 9-12lakh. Nissan might pull out a rabbit of the hat by pricing it lesser.