Published On Apr 29, 2019 By Nabeel for Mercedes-Benz V-Class

Mercedes has brought a luxury MPV to our shores. But being a CBU, the V-Class comes with a luxurious price tag as well. So, is THIS the luxury people carrier you were looking for? 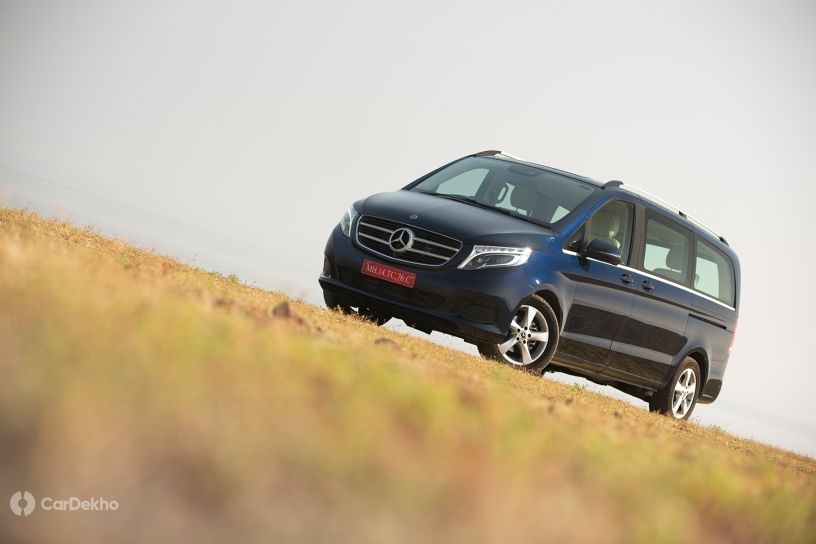 If you have been spoilt by the finest things that money can buy and wanted a people carrier for the family getaways, you would have to buy a massive 7-seater SUV. While traditionally SUVs are more capable, the third-row seats are always a compromise. Now though, Mercedes-Benz is offering its MPV, the V-Class, which can seat 6 people in comfort, in India. But it comes with a hefty price of Rs 81.9 lakh, which is just a lakh of the entry-level GLS. But the V-Class does pack a healthy dose of versatility and practicality to make a strong case for itself. Question is though, is the V-Class right for you?

If you look from afar, the V-Class is going to look like just another van. It's only when you get closer that you realise its sheer size, which is amplified by its boxy shape. In fact, at 5370mm X 1982mm X 1880mm (LxWxH), the V-Class is longer than the S-Class and taller than even the GLS. Even the wheelbase, at 3200mm, is longer than the Tata Nano! Hence, while the look might not be appealing, the V-Class does makes a statement with its presence.

If we had to pick one angle to look at the V-Class from, it would be the front. You get a big two-slat Mercedes grille which suits the car, along big swept-back headlamps. These units get LED DRLs and LED Intelligent Lighting technology which automatically adjusts the beam to not blind oncoming traffic while giving you optimal visibility.

From the side, the length and height of the V-Class comes into the picture. And though it is a pretty flat design, there are a few touches like the chrome window line which match the silver roof rails and strikes a nice balance. The alloy wheels are also silver, and though they might look small on the frame, are 17-inch units wrapped in 255/55 rubber. The highlight here, though, has to be the large glass area which makes up the entire upper half of the car, which has its own advantages and disadvantages. But we will get to that a bit later.

At the back, you have a very simple boot gate design flanked by beautiful LED taillamps. The boot gate too can be opened and is powered so you don't have to do any manual labour yourself. And the loading lip is also quite low, which means loading heavy luggage won't take much of an effort. The boot too is ample for loading three, or even four suitcases along with smaller bags. Taller luggage can also be accommodated by lifting the rear parcel tray. But we suggest you don't do that, because...

The rear windshield can be opened separately to access the rear parcel shelf. The shelf itself hides two foldable baskets in which you can store your knick-knacks. This little feature does come in handy every now and then when you need quick access to the placed items, or can even operate as a buffet table when out on a picnic.

The sliding doors of the V-Class are electrically powered and can be opened by simply pulling the handle. The door also remains locked into position when open to avoid any accidents on an incline.

The V-Class’ floor height is a bit tall. Hence, you get a nice and wide step for easier access in-built onto the door sill of the car, making it simple for smaller children as well as older members of the family to enter and exit the V-Class. The same has been provided for the driver and co-passenger as well. Step inside and you realise there is a lot of room in the cabin with the 4 seats pushed in each corner. The LWB model we are driving gets a 6-seater configuration, whereas the extra-long wheelbase model gets a 7-seater layout. But, that variant misses out on some features and is priced Rs 13.5 lakh lower than the Exclusive.

With the seats in the face to face layout, the sense of space inside the cabin is massive. The large windows running across the entire cabin length only amplify this feeling. These large windows offer a vast view of the outside, like no other car we have been in. But these windows are non-opening and don't even have a shade, hence even the people outside have a clear view of what's going on inside the cabin as well. Also, on a sunny day, the sunlight will become bothersome. A sunroof would have been ideal here as it would have provided a fresh air intake for the passengers, as well as improved the luxury quotient. Luckily, there is 3-zone climate control in the V-Class with separate controls for the rear cabin. Plus, you get a personal roof-mounted AC vent for each of the rear seats to keep you cool.

The captain seats are wide and will seat even the more generously proportioned passengers with comfort. The cushioning of the seats here is slightly on the stiffer side to keep you comfortable over longer journeys. Each seat can even be individually reclined manually, provided you have kept enough clearance from the rear parcel tray and the front seats. For this, the seats can slide horizontally on the rails on the floor. But remember, you will be sharing the legroom with the passenger in front of you. There is a better solution though.

You can change the seat position to a more conventional layout. Though this is a fairly simple process, it does take a lot of manual effort. The seats need to be unlocked, lifted from the rails, turned 180 degrees and then put into the proper grooves again. Once in place though, there is ample leg room for both the passengers. All four seats can be arranged in the desired orientation. You can even remove one or all the seats from the cabin to create more room to get maybe sleeping bags or mattresses if you are feeling adventurous. Also worth mentioning is the rear cabin sound insulation which is top notch. Now, it's time to look at a quirky feature of the cabin.

The compartment between the seats hides a table. It can slide through the length of the cabin and transform into a large table. It adds a tonne of practicality to the cabin as you can use it to work on a laptop or enjoy your favourite snacks. It even hides a storage compartment underneath which can hold water bottles. But sliding it isn't the smoothest of things.

While all of this is quite fascinating, the cabin isn't quite perfect. While you do get luxurious materials all around, there is a lack of features and the final touch points too feel a little crude. For example, the movement of the table on the rails is harsh and the metallic levers to recline the seats don't deliver a ‘Mercedes-like’ experience. Also, it would have been better if the rear cabin features an AC socket to charge laptops, which would have made it even more compatible with business usage.

This Mercedes-Benz V-Class packs a 2.1-litre diesel engine which has been made BSVI-compliant. The updated version of this engine is a 2.0-litre unit, which is available in India in cars like the C- and the E-Class. The reason I am mentioning this is that this 2.1-litre does feel less refined than the updated one. It’s also more audible to the driver and co-passenger, but luckily this noise does not bother the rear cabin passenger.

When it comes to pulling the three-tonne V-Class, this motor packs 380Nm of torque. It does take some effort to get going as you have to go slightly heavy on the throttle to build speeds. But once you get the momentum in, the V-Class easily cruises along nicely and even accelerating to overtake traffic feels effortless. But the V-Class really comes into its own on the highway. Cruising at triple-digit speeds barely breaks a sweat. In fact, at 100kmph, the 7-speed transmission keeps the motor spinning at just 1450rpm. The V-Class manages to sprint from 0-100kmph in 13.17 seconds and the accelerating between gears from 20-80kmph took 7.81seconds. You do get 3 drive modes - Eco, Comfort and Sport - and you are better off in the Comfort mode as Eco makes the engine feel lazy and Sport makes it angry.

Speaking of the transmission, it does, at times, flicker between gears to find the right one, especially in traffic. Even compared to the new 9-speed transmission from Mercedes, this one does feel a bit rusty. But the overall experience still remains smooth and won't leave you complaining. But there is something which is a little concerning. In our tests, the V-Class returned 10.97kmpl on the highway and even close to 6kmpl in the city. Given the weight it has to tow, it's understandable why the efficiency takes a hit.

While the V-Class looks and actually is big and bulky, it doesn't ride that way. In fact, it rides quite flat. It gest selective dampers which can alter the softness between smaller and larger undulations. Hence, while the V-Class remains comfortable over bigger potholes and speed breakers, it keeps the body roll in control on highways and corners. On city roads, the suspension is a bit audible inside the cabin but you don't feel the surface much. Sharp undulation will be felt but the V-Class remains well composed over speed breakers. And while the V-Class isn't meant to corner fast, it still managed to ride quite flat in corners, keeping body roll in control.

While driving, the size of the V-Class is masked well. The driver gets a good view ahead with a large windscreen and large driver and co-passenger windows. And while the view from the IRVM is a bit restricted, the ORVMs gives a generous idea of the vehicles behind. And Mercedes has taken care of your parking woes as well with a 360-degree camera. In short, driving this massive van around town isn't any more work than managing an SUV.

The V-Class has proven to be an extremely versatile vehicle. It can carry 6 people in absolute comfort, offers in-car convenience features like no other and is indeed an ideal family carrier for a weekend getaway. It can even double up as a mobile meeting room/office whenever required. But while it is versatile, it isn't as luxurious as we have come to expect from the three-pointed star. The seat moving mechanisms are too crude, the rear cabin should have had blinds and opening windows, and the seats too aren't as comfortable as the sedans or SUVs. And then, there is the big asking price of Rs 81.9 lakh because we get it as a CBU, almost doubling its original cost.

The V-Class comes up as the ideal carrier for 6, though it lacks the premiumness factor expected from a modern-day Mercedes car. And while you would still have to compromise in the seating space on the last row in an SUV, it will offer better versatility, comfort and features. So if money isn't a bother for you and the V-Class isn't going to be a daily driver, then having it in the garage is certainly an advantage for the versatility it packs in the cabin.