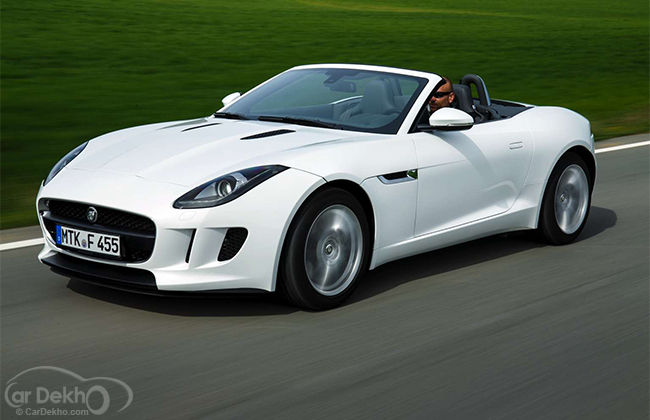 Every single time, I see the Jaguar commercial of “How Alive Are You?” Aerosmith begins to sing his classic hit “I’m Still Alive” in my mind and the image of the pulsating light on the push start button appears in a flash. Well, the brand talks about sportiness with elegance and all the luxurious frills.

It rolls out luxurious cars , however a sports car has been missing in the current fleet. A real blood performance vehicle that will create an adrenaline rush in your veins; a vehicle that will be a perfect road and track car. Jaguar started of as sports car brand and until today it lacked even one such car in its recent portfolio.

So, to get back its glory of a sports car brand, the company began a new project to reach the peak that it did about 50 years ago with the E-TYPE. First known to the world as the C-X1 6 concept at the Frankfurt Motor Show in 2011, was born the new F-TYPE.

It arrives at the Indian shore sometime in July, however we couldn’t resist the elation and got our hands on this British sports car in Spain. We drive it in city, B-roads, highway and a racetrack to share our thoughts about this sports car. Read further as the mystery unfolds.

The F-TYPE doesn’t carry forward any major design cues from its predecessors. The designers had an uphill task of crafting something as spectacular and at the same time even contemporary like the legendary E-Type. This is just like a movie sequel. Generally the sequels do not live up to the expectations, but it isn’t the case here.

The F-TYPE looks stunting and a piece of grace. “A piece of design should tell a story and this is why every line in the F-TYPE has a start, a direction and a conclusion. If you approach every line individually and get it as aesthetically correct as possible, get the dimensions right, it will stand the test of time,” says Ian Callum, Director of Design, Jaguar.

The F-TYPE gets a new front grille and LED cluster on the headlamps to give the Jaguars a more aggressive front stance with this DRG. The one-piece clamshell bonnet stretches back to encompass the signature Jaguar bonnet bulge and twin vents.

The F-TYPE has been sketched from two lines that run across the side profile and the connection is visible. One is the “light catcher”, which allows the door surface to wrap around the side of the car.

The silhouette of the F-TYPE makes it look lower thanks to the prominent swage line and a shallow greenhouse. The door handles also close into their slot when the car is locked. This gives a better integration with the design. At the rear, the E-TYPE tail lamp design is retained. However, the boot closing has been changed to the conventional style to increase the practicality.

The F-TYPE’s exterior demonstrates a new sports car design language for Jaguar, with cleaner lines delivered through the discreet use of technology such as deployable spoiler and door handles. The V8 S gets quad-pipe instead of the dual as we have seen on the V6 S.

F-TYPE has been designed as a 1+1. Everything is driver centric and the co-driver plays the role of an audience. All the switches, knobs and controls are around the driver. The layout has a typical-Jaguar ambience and it retains the sophistication levels.

A clear division exists between the driver and passenger sides of the cabin, created in the first instance by the grab handle, which sweeps down from the top of the centre console and wraps around behind selector sending the clear message that these are driver interfaces. However, the interiors are sportier than rather plush to blend with the aggressive-exterior styling.

The small diameter steering wheel is available with a flat-bottom as an option. The twin dials are easy to read and the TFT screen sandwiched between them makes easy for the driver to skip music and more importantly see road directions.

The large screen is also easy to read and we love the new sporty gear lever, which can be pushed into various driving mode with a gentle push from your palm.

Despite being a convertible, the boot size is fairly decent on the F-TYPE. Two backpacks can easily fit and so will a small sized suitcase along with it.

Jaguar is offering the V6 S and the V8 S variants for Indian car market. The V6 S gets the 3.0-litre supercharged petrol engine that churns out 375bhp of power and 450Nm of maximum torque. This is one of the new engines on the Jaguar F-TYPE and we shall soon see them propelling the XJ and other models from JLR’s portfolio. There is also a detuned version of this mill, however it won’t make it to India. The supercharger ensures there is sufficient power at low speeds and even upshifts get you the surge better than that in a turbocharged engine, where downshifts are heavenly. No complains from this engine and the eight-speed transmission that comes mated to this engine is responsive. We drove the V6 S on the Navarra track in Spain, and we came out pretty-impressed. The active exhaust enhances the sound of the engine and it is a pleasure to hear when accelerating.

The V8 S is a monster of an engine to have in this vehicle. We have always loved this engine and now it was like drooling. If the sound of the V6 S was exciting, the V8 S hits the uttermost peak of excitement with the loud exhaust growl and even the backfire that could even become the sole reason to procure this powerhouse.  This V8 will push you back into your seat and large caution sign, as you can get addicted to the tremendous acceleration produced by this mill. Drivers with a proclivity for speed will generally pick the V8, and shall bear the results.

F-TYPE is the best handling Jaguar ever made, and it isn’t just we who claims that, but the Coventry-based manufacturer says so. The V6 S has a 50:50 weight ratio that makes it agile and ecstasy to drive on winding roads.

Push it around a corner and you will be gratified in the manner the vehicle reacts and the steering wheel weighs up. The transmission is receptive, and you don’t miss manual transmission.

The V8 S has a weight distribution of 51:49 due to a heavier engine and there isn’t much of a difference for most, however the attuned will find the nose to be a tad heavier.

The wheels obey the tyre’s command and the Pirelli PZero adheres to the road like a quick stick and refuses to loose grip. Even the chassis is well balanced and follows all the driver commands.

The F-TYPE isn’t that robotic like its other competition and it is more driver involving, hence it will turn out to be a favourite amongst the enthusiasts.

The F-TYPE is a complete package as a sports car with impeccable styling, luxurious and sporty interiors and nimble driving dynamics. Now, the F-TYPE competes with the Porsche 911 and the latter is ideally to beat it on various performance fronts.

But it is the emotional connect that gives the F-TYPE an edge. Jaguar has ticked all the correct boxes to make a comeback in the sports car segment with the F-TYPE.