Published On Jul 02, 2013 By Prithvi for Hyundai Sonata Transform

Around for quite a while, Hyundai’s third generation Sonata is said to be a perfect blend of aggression, comfort and top quality features. We recently got our hands on this Korean piece of engineering to analyse how it stacked up against the likes of Honda Accord, Skoda Superb and the Toyota Camry. 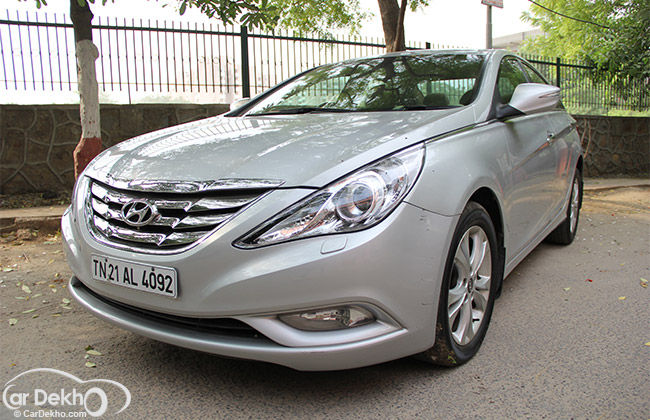 Into its third generation, the Sonata since its inception back in 2001 in the Indian market has had a bit of a roller coaster ride until now. Just to refresh your memory when introduced for the first time, this premium sedan shared a resemblance with Mercedes E Class courtesy twin round headlamps in the front and while the rear looked more like Jaguar S Type which the caught the imagination of many but could only be converted into to a few takers. While the second generation – Sonata Embera was a complete change but somehow that one too could not shake competition thus resulting in the development of the “Fluidic Design Philosophy” by the Korean Manufacturer. In India, this design adaptation has won the hearts of many, with the Sonata featuring it first followed by the Verna, i20 and until very recently the Elantra.

Hyundai’s Fluidic sculpture design brings forward a very aggressive looking premium sedan in the form of Sonata. Its front fascia with a chrome highlighted radiator grille, cat eye HID headlamps, fog lamps and a sloping bonnet contribute to its striking looks. Sleek and compelling design on its sides include elements such as a sharp sweeping line, which originates from the front fender and goes all the way towards the rear, side view mirrors with LED indicator inserts, flared wheel arches, chrome beading on doors and 10 spoke 17-inch alloy wheels. Meanwhile the rear features wrap around LED tail lamps with dual exhausts and a chrome highlighted boot lid. All in all in our opinion, the All New Sonata with its ‘Fluidic Design Philosophy’ is a very vibrant product when compared with previous two generations. Going by its sheer looks, this one is a must to have for your garage.

Speak of luxury and the Sonata would not disappoint you. Similar to it exteriors, the interiors too provide the same level of satisfaction when it comes to features on board. To begin, the all new Sonata provides a dual tone cabin. Since this is a premium sedan which comes at higher price, the quality of plastics, fit and finish is of top quality thereby giving an impression of perfection. In the front, the dashboard is where most of the action lies for its occupants.

As for the driver, the new Sonata offers a dual colour telescopic steering wheel with the facility of tilt. Plus there are steering mounted controls for that extra bit of comfort. The instrument cluster provided for caters two round dials with chrome surrounds and an information display which when lit up at night looks very elegant especially due to its blue elimination.

The centre console on the other hand bears a 2-DIN CD/radio stereo system with the facility of an auxiliary input for connecting i-Pod and a USB port for slotting in that pen drive that hoards numerous sound tracks to keep one entertained while on the move. Further dual climate control helps in keeping the cabin cooled at all times. The centre arm rest placed between the front two seats comes in handy for storing those much needed Cd’s as well as for resting the elbow during long drives.

Now moving towards seating comfort, the front row offers 10 way electrically adjustable seats with memory function, while the rear seats cater to 60:40 split. Availability of ventilated seats though out the cabin help in enhancing cabin experience as both rows provide ample of head, shoulder and leg room. As expected from a vehicle of its type, the under thigh support is also fairly decent. Another centre arm rest at the rear forms basis for audio controls and provides two cup holders for keeping glasses or cups. This is a typical premium feature which will be liked by many. Rest as far as safety is concerned the All New Sonata caters to 6 airbags, ESP, reverse parking sensors along with a camera to just mention a few.

Sonata comes only in petrol therefore what one would find underneath the hood is a 2.4 litre GDi engine, which is said to be both powerful as well as fuel efficient. With Dual Continuously Variable Timing Valve Train (D-VTVT) technology on board, the efficiency part of the bargain is decently maintained. Considering the power output figures of 198bhp and 250Nm churned out by the 2359cc engine, it beats its competitors on paper, but I feel that the power delivery and distribution could have been much better. Its mid range is good while performance is just about okay. Otherwise the engine feels very refined under Indian driving conditions, though we would have preferred the automatic variant instead of the manual one. The manual variant therefore features a 6 speed gear box which caters to decent shifts.

One of the biggest advantages of the Sonata is its massive wheelbase that provides this sedan better stability and at the same time going over potholes and broken roads isn’t really an issue. However due to a softer suspension setup, the rear does get a little bumpy at times. It does well to handle corners, curves and turns with ease without having to trouble much of its occupants. Given its sheer size and performance, the Sonata does come across as worthy contender in the premium sedan segment.

The All New Sonata is a well thought out product by the Korean manufacturer. Its Fluidic Design Philosophy inspires one from within to simply get hold of one, while comfort and luxury is unmatched, when compared to Honda Accord while it’s at par with Skoda Superb and to a certain extent even the Toyota Camry. With a price tag of Rs 18.78 lakhs (ex-showroom Delhi), Hyundai Sonata in our opinion makes up for a worthwhile proposition, considering the features it has on board and pricing it has to offer which is on lower side when compared to many of its competitors within the segment.