With a cabin that reminds you of an electric car with its quietness, and a top speed of 241kmph, the Audi A4 promises to deliver the best of both worlds 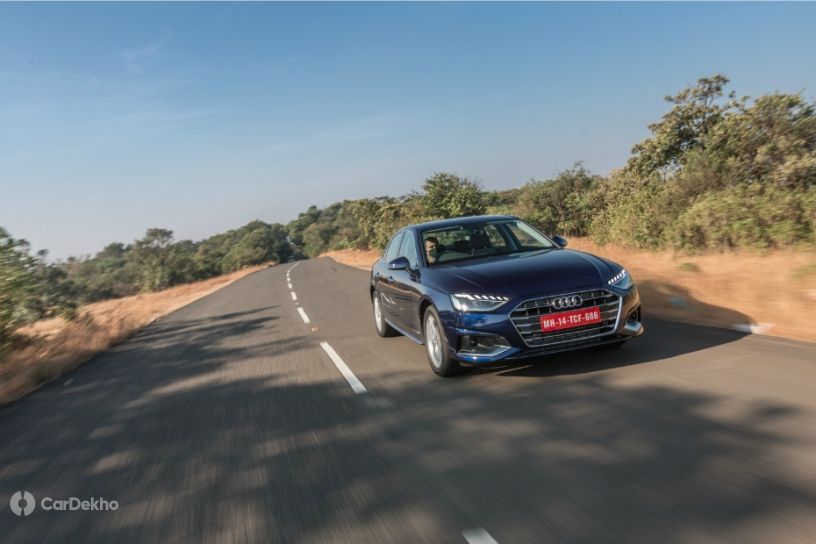 After a brief hiatus, Audi’s A4 is back once again to stake its claim, but it will not only be battling its German cousins but also the Volvo S60 and Jaguar XE. And since the upcoming A4 is only a facelift and not a full new-gen model, we wondered if it could offer enough to take on its rivals. To find out, we took the A4 out for a quick spin on the winding, twisting road up to Aamby Valley, to forge some initial impressions.

Audi’s been really subtle about the way they have gone about this facelift. In one glance, you won’t notice most of the changes, but take your time and you suddenly end up looking at quite a different A4 from before. The kink in the headlights is gone and they feature a redesigned LED DRL pattern which looks thoroughly modern. The bumper too has been sculpted on a new sheet of paper. One thing that will remind you of the older A4 is the full-face grille, but even that is now wider and makes the facelifted A4 look wider.

The shoulder line, which previously used to flow from the front to the back, has been broken up. And Audi has even made the effort to rework the rear fenders, so that they look more muscular. If you thought that after all these changes, Audi left the tail lamps be as it is, we wouldn’t hold it against you. After all, their shape is exactly the same as before. But the devil here lies in the details. The internals of the tail lamps have been heavily reworked and feature an updated LED design that matches the front. Not only  that, dynamic turn indicators continue to be offered only at the rear, an odd miss.

The interior of the Audi retains its character from before. You’ll find good quality materials used throughout the cabin with most of them being soft touch plastics. The fit and finish levels leave nothing to be desired, as before, and the touch-sensitive climate control buttons continue to make you feel like you are in a much more fancier car.

While the character of the A4’s interior remains intact, Audi has updated bits like the steering wheel which looks sportier than before. However, the small round horn pad means you will have to lift your hand off the wheel every time you want to sound the horn. It’s something that will prove to be a nuisance in India’s traffic or on a winding ghat road where you want to warn somebody approaching a sharp corner about your presence on the other end. The touchscreen unit is also new and larger than before, and a huge relief is that you don’t need to use the touchpad to control it anymore.

At the rear, the A4 remains a four-seater. The huge transmission tunnel in the centre means that the middle seat is only fit for a small child. However, six-footers can easily accommodate themselves on either side in relative comfort and you continue to get separate climate control buttons for the rear cabin. There are sun shades as well that will allow you to block the sun and maintain your privacy while being driven around the city. The rear seats can be folded down, but you can also lock these so that a valet doesn’t gain access to your boot. For those of who use the boot often, there’s 460 litres of boot space. The spare wheel is tucked underneath the boot floor of the A4, so you can make use of all the available space.

One of the bigger changes in the A4 lies underneath the bonnet. Previously, you could have it with a 2.0-litre diesel or a 1.4-litre turbo-petrol. BS6 emission norms meant Audi dropped the diesel and common sense meant that the 1.4-litre turbo-petrol was replaced by a 2.0-litre turbo-petrol--which churns out 190PS and 320Nm of torque, with a 7-speed dual clutch transmission turning the front wheels. There is a mild hybrid system onboard too which works to improve the fuel efficiency of the A4.

We have driven this powertrain combo in other cars but in the A4, it just feels different. The refinement levels have been upped and along with better NVH levels, you could mistake the A4 for an electric car when driving around in the city. It is only above 3,000rpm that the engine’s sweet note starts making its way inside the cabin.

The performance from the engine, although not blistering quick, is enough to keep you on your toes. The seven-speed DSG is smooth as ever, if not more. The shifts are literally imperceivable in comfort mode. Even in dynamic mode, where the engine and the steering wheel are tuned to deliver their best, the gearbox remains buttery smooth. We do wish Audi had offered the A4 with the Quattro AWD system as well, like it does in international markets. It would make the A4 a nice option for those looking to add a bit of zing to their drive.

If you aren’t looking to keep your right foot plastered to the floor all the time, then the A4 has the right tools to return a fuel efficiency of up to 17.42kmpl. The mild hybrid system allows it to enter coasting mode, every time you take your foot off the throttle above the speed of 55kmph. Keep coasting and the A4 will even shut off its engine temporarily, using the start/stop system onboard. And you even have brake energy regeneration to top off the batteries on the go.

The back seat of the A4 literally feels like you are wafting over Indian roads while sitting on your living room sofa. There is no other way to describe it. Around 40 to 50 kmph, you find that sweet spot of the suspension where every small wrinkle in the tarmac is ironed out with the least amount of fuss. And you don’t really hear it too until you go crashing into a pothole at ungodly speeds. This is an early claim which we will look to test in the near future but I think the A4 has what it takes to be the car with the best ride quality in the segment.

And if you thought that this supple ride quality meant that it wouldn’t feel nice around a corner, think again. The A4 tucks into corners with little hesitation and it is only when you start overpowering the front wheels with your right foot that it starts to veer off its line. Body roll is kept to a minimum and was barely perceivable in the short time we had with the car. The A4 then strikes a good balance between being a comfortable car and a car that will put a smile on your face when going around a corner. One quick mention here, the NVH levels inside the cabin are so good that you don’t really hear the tyres squealing around corners.

The A4 is coming back after a break, refreshed and ready to take on its rivals. And the segment it competes in is traditionally composed of buyers looking to bring their first luxury sedan home. If I was one, then the A4’s initial impressions really leaves me wanting for more. It’s quiet and comfortable, and at the same time it can hustle with a top speed that goes all the way to 241kmph! And while we really aren’t looking to test that claim, it’s a big number that feels nice to boast about to your friends. Now the A4 might not have the fanciest tricks up its sleeve, but it does the job of a luxury sedan quite well. And at an approximate price of Rs 42 lakh to Rs 48 lakh, there’s not much else that does the job this well.