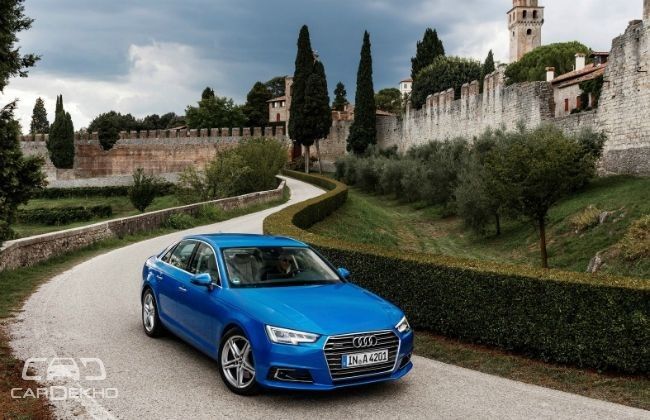 The Audi A4 is one of the most important cars in the German company’s large and all-encompassing portfolio. As one of their highest-selling cars, the A4 sedan in India is loved mostly because of its sleek and very edgy design along with an easy to drive appeal and high quality interior. This means that following up to such a high benchmark is a pretty tall order. So have the engineers at Ingolstadt managed to make the already likeable A4 even better?

At first glance the new A4 looks pretty much like the one it replaces. But place the two cars next to each other and the differences become quite obvious. The new A4 gets a much wider and more detailed grille than the older generation car. Combine the sharp and curvy grille with the all new headlamps and the car appears to be lower and wider from the front, giving it great road presence. The headlights, of course, are the talking points for most Audis nowadays and the new A4 gets a set of LED headlamps with a fresh new design for the daytime running lights.

The side profile does continue to stay a little bland but very well-proportioned like all Audis. Move to the rear and the sleeker, meaner and wider stance continues. Just like the front, the design might not be drastically different from what we are used to but the new tail lights, new bumpers and the exhaust tips give the A4 a refreshed look. We also like the muscular edges that Audi has added to the bumpers that accentuate the low stance of the A4.

The first thing that catches your attention when you get into the new A4 is how well-made and high quality everything is. The switches, AC vents, leather panels and, of course, the steering wheel is well crafted and oozes a sense of luxury that is to be expected from a luxury car brand today. The last generation A4 was criticized for being a little too boring but with additions like the new smart ‘virtual cockpit’, the new one is a stark contrast. The new A4 also gets a new free-standing screen and a larger control panel that gets a wood surround. You also get a new user interface that is very easy to use and Apple CarPlay along with a highly customizable ambient lighting setup.

The new A4 is also a lot more spacious on the inside than before. Leg room and head room at the back have increased and we think that the A4 could very well be the most comfortable car in its class now. And, considering the fact that most luxury cars in India are driven by a chauffeur, this is good news indeed. The front seats are really comfortable too, especially when you set the side bolsters and the lumbar support to perfectly cocoon your body. Now, the car we drove also came with heated seats but what we would really love in India would be a set of cooled seats that could really push the A4 up in the equipment game.

The Audi A4 will make it to India with a wide range of engine and gearbox options. Of course, both petrol and diesel will be on offer considering the recent resurgence of popularity in the petrol luxury segment. The petrol engine will be a 2.0-litre turbocharged 4-cylinder motor that makes 190PS of peak power and 320Nm of peak torque. The engine will be mated to a 7-speed gearbox and will be available only with a front wheel drive layout. The diesel will be the more popular one and, in this department, Audi does have a few surprises planned. For starters, Audi might bring in a manual gearbox in the A4 for the first time. The manual gearbox will be the base version and will be mated to the 2.0-litre TDI engine that will make 190PS of peak power and 400Nm of peak torque. This engine will also get a 7-speed dual clutch gearbox as an automatic option and will also be mated to a front wheel drive platform.

There will also be a range topping 3.0-litre V6 diesel engine that will be offered with the all-wheel-drive Quattro setup. This engine makes 272PS of peak power and a tasty 600Nm of peak torque which makes it the most powerful diesel engine in its segment by a long margin. Luckily, this is version that we got our hands on and we are happy to report that it is a hoot to drive! The power comes on really strong and, before you know it, you are on the right side of 200kmph (which is legal on the autobahn) and on the way to an electronically-restricted top speed of 250kmph. The gearbox especially makes a world of a difference and as expected, the dual clutch setup is lightning fast. But it is not just the power that really impresses us; it is the sheer levels of refinement that Audi brings to the table with the new A4.

The A4 has always been known more for its ride quality and overall refinement as compared to its handling and its latest iteration follows the same principle. That said, the older lifeless steering has improved and the A4 now gives a lot more feedback than before. However, it is still not in the same league as a Mercedes-Benz C-Class or the BMW 3 Series. But for most people in India, ride comfort is of paramount importance, and the A4 is certainly the most comfortable car in the segment. Take it over bumpy and rough roads and the A4 takes it all in without any thumping and thudding even though it rides on low profile tyres and large wheels.

The new Audi A4 is a serious contender to the crown between its biggest rivals, the Mercedes-Benz C-Class and the BMW 3 Series, along with the new kids on the block, the Jaguar XE and the Volvo S60. It gets a large range of engine and gearboxes and will be available in India with a very good standard equipment list. The new Audi A4, though, will appeal to audiences because it is more spacious, has a very good looking (and high quality) interior, and is very comfortable. Audi will launch the car in India very soon and if rumors are to be believed, the A4 will actually be launched at a price point slightly cheaper than the current generation which would also make it great value for money.