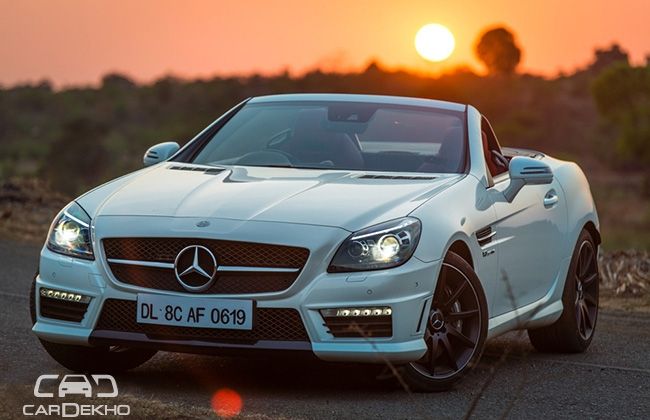 AMG doesn't just signify more powerful Mercedes-Benz, but it is now a brand in itself. We lay our hands on the AMG spec SLK and find out how much of an AMG does it have in itself. We had driven the SLK 350 a year and half ago and now it is the time to drive the SLK 55 AMG.

This is the car where you won't just go fast but even enjoy the wind and the grunt from the quad-pipe AMG exhausts. Read further as we reveal how does this AMG bred SLK fair.

The SLK is in its third-generation at the moment. This is the first time that the SLK looks aggressive than cute, which was the case with the first two generations. The SLK 55 AMG gets a nose similar to the SLS to get the same family look. The SLK 55 AMG gets the body kit that isn't seen on the conventional SLK and also the nose is AMG-styled increasing the aggression. The front grille is larger and the scoops running across the car are larger. There are the day-time running lamps too and even the tyre size is bumped up to 18 inches.

With the roof closed, the silhouette looks a bit disproportionate with a long bonnet and short boot, however once the roof has been opened, the size does look proportionate. The rear of the SLK gets quad-pipe exhaust and a spoiler that make it differentiate from the conventional SLK. Of course there is also the AMG badging, which is another visual differentiator between the two.

The interiors of the AMG-spec SLK aren't very much different from the regular SLK. The quality is top notch and matches the AMG standards. The instrument binnacle is made of twin dials and a central information system too. It also gets the same three-spoke Mercedes-Benz steering wheel with a flat bottom. It get circular air-con vents and of course the COMAND system.

The SLK 55 AMG also gets an analog clock on the top and ofcourse the AMG spec car has some more differences like the AMG badging on the inside.

The SLK is a strictly two-seater and doesn't have much space left. The seats are comfortable and even supportive for back and the side. It just cocoons around you just like any other sports car. When the roof is folded into the boot, there is hardly any space for your luggage. Possibly a couple of large backpacks might just fit.

Mercedes-Benz has plonked the SLK 55 AMG with a 5.5-litre naturally aspirated V8 petrol engine that produces 420bhp of power and 540Nm of peak torque. This might sound less for an AMG standard, but open the bonnet and see how tight fit is the engine in the SLK bay. This power is good enough for the SLK. It produces about 120bhp more than the regular SLK 350 with a weight difference of mere 63kgs.

Now, this all sounds good. However, what the SLK misses out on is the AMG mode. Floor the accelerator and you will hear the loud exhaust. However, the push isn't that aggressive even if you drive it in the manual mode. The SLK isn't that quick when you compare it to the other AMGs. It is fun and the loud exhaust does make you grin all day long, but that's about it. The wind in your head feeling is just brilliant, you can cruise all day considering only one fact that the weather is good.

This comes mated to a seven-speed self-shifting transmission that is seen on other Mercedes-Benz too. This isn't the double clutch box, but the 7G-TRONIC. The shifts on this box are a bit lethargic and it does blunt the engine's performance up to a certain extent.

The biggest advantage of the SLK, despite being an AMG is its ride quality. It is sublime and doesn't break your spine even on bad roads. The ride quality is sorted and it doesn't feel jittery at any given point. It isn't even affected on higher speeds too. One can cruise in great comfort the whole day in the SLK. This is a great cruiser.

The handling of the SLK is just fine. The suspension and the chassis is flexible and they respond well to the steering and do a good job. The SLK 55 isn't the best handler but definitely a good one. Change the mode into sports and things improve further. The throttle response is better, the shifts are quicker. The steering wheel is light and easy to drive all day long. The response from it is also good.

The Mercedes-Benz SLK 55 AMG is a joy to drive. It isn't quick like other AMGs, and more of a grand tourer. It costs about Rs 1.6 crore on-road in New Delhi and this will mean that you can buy several other convertibles that have better performance and more fun to drive.