The new Audi A3 Cabriolet

Audi India has again made it to the headlines by rolling out the A3 Cabriolet in the Indian automobile market. Unlike the sedan version, this Audi A3 Cabriolet is introduced as a CBU unit. While launching this majestic vehicle, the manufacturer has also started airing its official TV commercial. It is a 46-second video, which describes about its style and overall performance. As we can see in this film, a couple reaches the top of a mountain in this vehicle. From there on, the lady uses the parachute to reach the foot of this mountain, while her partner drives this Audi A3 Cabriolet to receive her on time. This is such a pretty ad-film, which will certainly connect with the auto enthusiasts. Powering this vehicle is the 1.8-litre TFSI petrol engine that is paired with a 7-speed automatic transmission gearbox. It can pump out a maximum power of 180bhp along with a torque of 250Nm. This two-door version is incorporated with several advanced comfort features like Audi Parking Aid Plus, a dual zone fully automatic AC unit and an Audi Music interface including Sound System. The most important aspect of this cabriolet is its fully automatic fabric hood, which opens or closes in a time span of just 18 secondsflat. Another attraction of this vehicle is its signature LED lighting pattern all-round, which gives it an astonishing look. 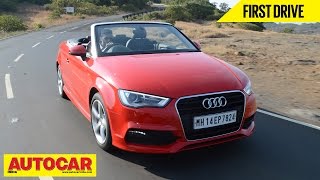