THE KING OF SUVs IS COMING BACK

King of Desert: is undoubtedly the best term for Mitsubishi Pajero after winning Paris Dakar 2007, again, leading to the unbeatable statistics till this minute as the manufacturer claiming 12th consecutive year of winning and 12th overall victory earning the title of Most Dakar Rally Wins by A Manufacturer from Guinness World Records. The Pajero is still undefeatable . We care about performance but the new Pajero is launching in 2019 March, which will be a game changer in the Indian market. Although they don't have much service centers, now they have opened many service centers in India because they are launching their new SUV and they have seen so much growth in the Indian market, so they are establishing their plants in India. This SUV didn't have many features previously but now it is coming with many features.

4.3/5
Based on22 User reviews
Write a Review and Win
An iPhone 7 every month! 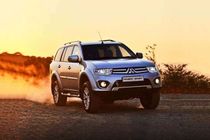