Published On Jan 10, 2023 By CarDekho for BMW 3 Series Gran Limousine

A revised front end and the latest i-Drive 8 infotainment system lend the BMW 3 Series Gran Limousine a breath of fresh air. Do the changes work? 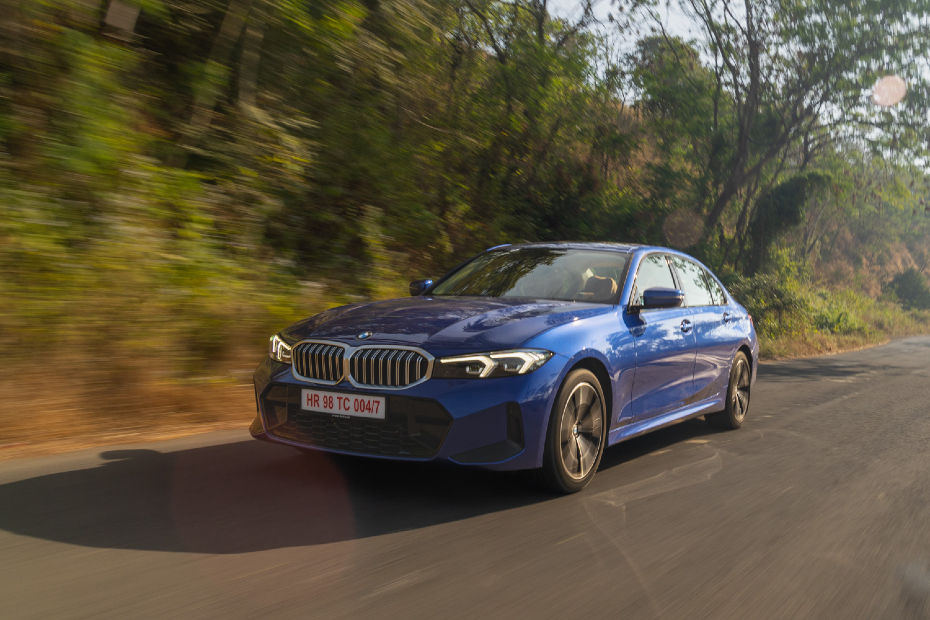 The BMW 3 Series Gran Limousine, when introduced in India, brought a unique proposition to the segment. Its long wheelbase attracted the eyes of the chauffeur-driven, while it still offered the driving pleasure BMWs are known for. After nearly two years of its existence here, BMW is bringing in the sedan’s facelifted version, which packs refreshed looks and more tech on board.

We’ve spent a good day with the refreshed 3 Series Gran Limousine to tell you if all the updates make sense or not.

Our test car was the top-spec 320Ld M Sport. Earlier, this variant was limited to only the petrol version with the pre-facelift model. You can also get it in a Luxury Line variant that gets more elegant design touches.

For starters, the revised LED headlamps and bumpers with gloss black inserts make the car’s front-end look sporty. This being an M Sport model, it sits on M-branded 18-inch five-spoke dual-tone alloy wheels that lend the profile a nice aggressive stance.

Spotting the changes at the rear is tricky as the only update is the mildly revised bumper which gets a fake diffuser-like element at the bottom.

The design updates sure are minor, but they lend this sedan a breath of fresh air. The easiest way to tell that this is the facelifted model is by picking this good-looking blue colour.

The main change on the inside is with respect to the new dual curved screens comprising the touchscreen infotainment system and the digital driver’s display, running on BMW’s new i-Drive 8 user interface. It makes the cabin look more upmarket and premium. Quality of the materials are also right up there with the best with plenty of soft-touch plastics that can be found even in the lower half of the cabin.

BMW’s i-Drive 8 is fairly easy to use and the screen is hi-resolution with clear graphics and minimal lag. A fairly large screen means BMW has shifted the climate control functions to the screen. While changing the temperature setting is relatively easy, it’s a two step process to change the fan speed. Also, the screen gets quite warm and on a hot day you can actually feel the heat on your finger tip while scrolling.

That said, voice commands do come to your rescue and it understands our accent very well. It also gets the traditional BMW joystick, which thankfully, we are very happy with, especially with cabins in rival cars going more towards touchscreens or touch pads.

In terms of features, the facelifted 3 Series gets most bases covered. Highlights include three-zone climate control, wireless Android Auto and Apple CarPlay, a crisp-sounding Harman sound system, ambient lighting and powered front seats with memory function for the driver.

But at this price point, there are not-so welcome omissions. Ventilated seats and a 360-degree camera would have been a useful addition. Plus, the lack of ADAS at this price is a bit of a miss, considering that a number of mainstream cars have now started to offer this technology already.

Comfy To Travel In

Accessing the rear seats is a bit tricky due to the car’s low stance. However, once you’re seated, the bench is nice and accommodating. Back support and underthigh support is good and you can do long distances here. You also have a nice soft pillow to rest your head. That said, we wish cushioning could have been a bit soft for a more sunk-in feeling.

Plenty of amenities are present, like an armrest with cupholders, decently sized door pockets, and a separate zone of climate control. However, no rear sunshades in a car aimed at the chauffeur-driven is a silly omission.

Up front, the 3 Series’ seats are large and accommodating. The seats and steering wheel have a long range for reach and rake adjustment, so finding the ideal driving position is very easy. Door pockets up front are also large and the central console has cup holders for 500ml bottle or medium-sized coffee cups. The storage under the armrest is enough for knick-knacks as well.

Basics: The model we tested had the 2-litre diesel engine developing 190PS and 400Nm. It drove the rear wheels via an automatic transmission.

At slow speeds, you’d barely notice that this is a diesel engine. The ‘box shifts through the gears early and the drive experience is very refined. Almost zero turbo lag means it’s also very responsive and overtaking fast, flowing traffic can be executed by just pressing the accelerator. The transmission is a little lazy to shift down in comfort mode though.

On the open road, the 3 Series is an effortless cruiser. Power is served up in a linear fashion and you hit three-digit speeds very easily. It can cruise all day long with the engine ticking down lower down in the rev band, thanks to the long-legged eighth gear.

Shift it into Sport mode and the engine and gearbox are at their most responsive setting. The engine loves to be spinned hard to the redline and the fun is further accentuated by a gearbox, which stays in the right gear most of the time.

If the 330i is the drivers car and the now discontinued 3 Series GT was a cushiony cruiser, then the 3 Series Gran Limousine finds a middle ground between the two, at least in terms of driving pleasure.

Softer Suspension And Dialled Down Handling?

Due to this car’s main focus being toward chauffeur-driven owners, the suspension setup is softer than the standard 3 Series. That said, BMW hasn’t dialled down the softness way too much, so the ride and handling balance is good.

Minor imperfections on the road are nicely ironed out with a flat ride. It’s also capable of tackling small potholes and bumps on the road as well, but with a tad bit of side to side body movement. But there’s a solution to tackle it: drive faster for a smoother ride. That said, sharp bumps do catch out the suspension, resulting in a loud thunk in the cabin.

It’s also fun on the road if you decide to be behind the wheel. Straight line stability is rock solid and you have a reassuring feeling behind the wheel while doing three-digit speeds. It’ll also tackle twisties without much complaint, but the softer suspension means body roll is evident, especially while tackling long, sweeping corners.

Steering feel is also not brimming with feedback, especially at slower speeds. But as you drive faster, specifically in Sport mode, it becomes a bit more communicative. That said, it is direct and it points the car exactly where you want it to go. The brakes are also reassuring and strong but have a lot of pedal travel before they give you full power. Great for driving in the city but something you need to get used to when you’re driving in a more spirited manner.

All the design changes and addition of i-Drive 8 are also welcome as they lend the sedan a breath of freshness. It does miss some essential features and there are cars in this segment (in its own stable in fact) that are better to drive or more luxurious (like the Mercedes C-Class).

But overall, the 3 Series Gran Limousine still hits a sweet spot and makes for a great option for those who like to be driven in as well as for those who live to drive as well.