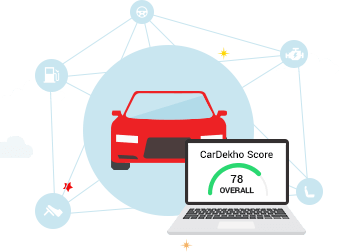 For the first time in India, a dedicated team of test engineers at CarDekho has been conducting scientific tests for each car using advanced equipment and specialized testing procedures. We focus on specific areas of the car while testing them. We also ensure that, right from the suspension to the seat comfort, we have covered it all. These tests helped us acquire lots of scientific data and readings regarding various aspects.

To simplify things, we have come up with a scale from 0-100 for each aspect of the car.

How do we test?

Our team of professional car testers use scientific instrument and compile loads of data to rate every car in India. You can see the equipment being used by the testing engineers in the picture. It includes -

There are four main categories that are focused upon by these tests:

Commonly known as NVH test, this measures the amount of noise you can hear in the vehicle, both from the driver's and passenger's perspective. This can help determine the level of comfort in a vehicle. This test is also used to measure vibrations that occur at various points in the vehicle. If these vibrations are too high, the drivers (and also passengers) experience some level of fatigue over long journeys. 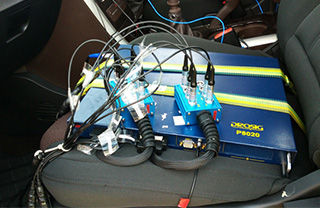 Pro-Sig Box with connectors
The normal standards of measurement

Usually sound is measured in decibels (dB). In these tests, the units used are dBA (decibels A-weighted). These are an expression of relative loudness of sounds in air as perceived by the human ear. Below, you can see a comparison table of various sounds and their dBA levels.

A term called "Articulation Index" is used as a measure of level at which people in the car can converse in a normal manner without having to raise their voice due to engine noise and wind noise. Other factors that might ability to converse include the sound of an over-revving engine or the noise that seeps into the cabin when the vehicle is driven at low rpm in high gear.

The accelerometers and seat pad sensors give out reading that are in meters per second squared (m/s2). These measurements are sent to the Pro-Sig box, where they are recorded for analysis. Readings are taken at different speeds like 40, 60, 80 and 100 kmph over smooth as well as rough roads. This is done so as to account for all the different road conditions that one might come across.

As expected, the results of this test vary considerably from car to car. This can be due to:

Our in-house team has stuck to cars that are in completely stock condition and have clocked less than 15,000 km on the odometer.

It takes a few hours to completely set up the equipment for each car. The different locations for each component are as follows:

The data from the sensors is collected by the Pro-Sig and this is in turn fed to the testing team's laptops. The sound and vibration levels are captured continuously. The driving conditions for the car both on smooth and rough roads are:

All this data that is churned out by the sensors every second has to be consolidated and laid out in a simple manner so that even a layman can understand what is being done. So, our testing team gives each car a relative score on a 0-100 scale.

The Seat Comfort Test will measure whether your car seats are comfortable enough for short and long journeys. Maybe, they are so good that you can sleep in them too. You never know. The Suspension test will determine whether you can sleep in them even while the car is moving. In other words, it will give you an idea about the ride quality of the car and how good it is at soaking in bumps.

All these sensors are connected to the Pro-Sig box.

The normal standards of measurement

The pressure exerted is measured in kg/cm2. This is the pressure exerted by the seat on the driver's hips, thighs and back. The standard driver used for this test weighs 68 kg and is 5'7" in height. We usually store him in a closet until we need him for tests like these. The seat is adjusted so that the driver can get a proper view of the road and also access the pedals comfortably. In such a scenario, the overall pressure distribution is tracked using the membrane sensor on the seat. 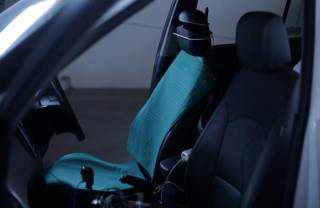 A membrane sensor placed on the seat to measure pressure exerted by the seat on the driver. 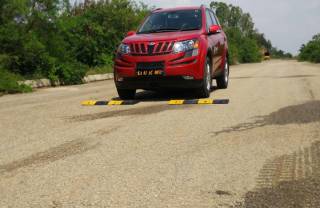 Factors that determine seat comfort are:

Factors that determine Suspension efficiency are:

In the heat maps, the areas of peak pressure are shown in red, and the blue and yellow areas indicate low to moderate pressure. Since all this is again a lot of data to process, the rating is given on a 0-100 scale, where the lower score indicates a better seat.

For suspension also, the vertical movement is averaged out for all cars belonging to a particular segment, and each car is given a score between 0-100 where a lower value indicates better efficiency.

Heat map generated by driver position in various cars. The lower half of the image shows heat-maps for driver's back and seat interaction. The upper half shows the same for driver's lower body and thighs interaction with the seat.

Graph showing a Baleno moving over a speed bump. Deviation in Z-axis is recorded

This test measures the effort it takes to turn the steering from lock to lock, both when the car is stationary and in motion. The number of turns take to go from lock to lock is also measured. Apart from this, the test also measures the force required to be exerted on the clutch pedal while shifting gears. This is an essential detail especially for cars commuting in jam-packed city traffic. 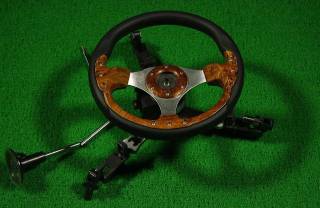 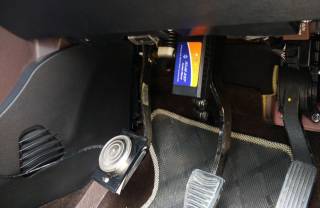 Pedal sensor attached to the clutch pedal. The small car-like part is a Bluetooth OBD-II reader connected to the ECU port of the car
The testing equipment
The normal standards of measurement

One of the biggest factors is the condition in which the vehicle is in. We have taken vehicles in stock condition with less than 15,000 kms on the odometer, just like the ones used for the NVH test. This was done to avoid the influence of wear and tear of the components on the test data.

The type of steering should also be taken into account - Electronic/Hydraulic power assist. Even clutches are usually of two types- Hydraulic and Cable-operated.

To measure the steering effort:

To measure the clutch pedal effort:

All these readings are received from the sensors by the Pro-Sig box and then transferred to the tester's laptop.

This test measures how fast a car can go in a straight line from 0-60 kmph and 0-100 kmph. It also measure the time and distance taken to come to a complete halt from a speed of 100 kmph.

The testing equipment
The normal standards of measurement

The inertial measurement unit with GPS and OBD reader are connected to the car. Acceleration is measured in seconds against kmph, i.e., 0-100 in X seconds. Braking is also measured in the same units. 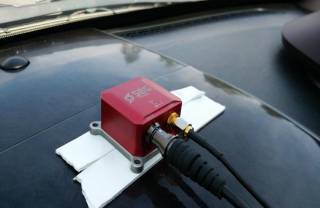 Both acceleration and braking are affected by similar factors like:

Braking alone is affected by whether the car has ABS (Anti-Lock Braking system).

Generally, a car with lighter curb weight and bigger brakes performs better in these two tests. The g-forces acting on the car are also tabulated. Lower the score, better the performance.

Please tell us your city

It will help us serve you better content and best deals

In contrast, the Jazz scored 62 and 51. So, the Jazz is in of the Little Noise (Score 61-75) category for the driver and Silent (Score 51-60) category for the rear passenger. From this, we can conclude that, under test conditions, the Honda Jazz is quieter inside.

The Jazz on the other hand, has scored 19 for vibrations from driver's perspective and 13 for rear passenger, putting both in the Comfortable (Score 11-20) category. So, under test conditions, it can be said that the journey in the Jazz is smoother.

So, under test conditions, it can be said that the the Honda Jazz is quieter inside and journey in the Jazz is smoother.
close
Sample result for Seat comfort and Suspension Efficiency test
Maruti Baleno 1.3 Alpha
VS
Honda Jazz V iDTEC

When assigning the score on a scale of 0-100, it was found that the Baleno scored a 28 for driver and 27 for passenger. This puts it in the Average Comfort (Score: 27-33) category.

The Jazz scored a 31 for both driver and passenger, putting it in the Average Comfort (Score: 27-33) category too. It can be said that the Baleno is marginally more comfortable than the Jazz.

Comfortable For Driver
Below Average For Passenger

On a 0-100 scale, the Baleno scored 33 while the Honda Jazz scored 34. Here again, the lesser the score, the better. According to our band-wise classification, both cars would fall in the Average (Score 33-38) category when it comes to Steering Effort.

For the Clutch Effort, the Baleno has scored a 65 and the Jazz a 70. Accordingly, the Baleno falls in the Light (Score 65-69) band while the Jazz is in the Average (Score 70-75) band. Again, the Baleno outscores the Jazz by having a lighter Clutch.

So, the Baleno has a marginally better steering than the Jazz under test conditions. Again, the Baleno outscores the Jazz by having a lighter Clutch.
close
Sample result for Acceleration and Braking test
Maruti Baleno 1.3 Alpha
VS
Honda Jazz V iDTEC

The Baleno scored a 36 on the acceleration test which places it in the Good (30.1-36) category. The Jazz falls in the Average (36.1-45) category as it scores a 38. So, the Baleno proves to be a quicker car off the mark compared to the Jazz.

Here, the Jazz scores a 57 as compared to Baleno's 59. The Jazz falls in the Good (Score: 50-58) band while the Baleno falls in the Average (Score: 59-66) band. So, while the Jazz loses out on the acceleration front, it gains over the Baleno in terms of braking.